One year after he became the first Asian athlete to ever win a medal in alpine snowboarding, Lee Sang-ho headed back to the very same slopes, taking bronze in the men’s parallel giant slalom at the International Ski Federation (FIS) World Cup in Pyeongchang County, Gangwon, on Sunday. 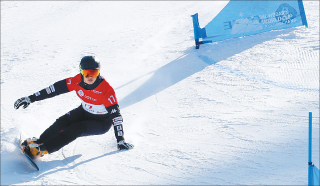 Lee Sang-ho races in the semifinals of the FIS World Cup in Pyeongchang County, Gangwon, on Sunday. [YONHAP]

After losing the semifinal race to Sylvain Dufour of France, Lee finished 1.39 seconds ahead of Maurizio Bormolini of Italy to settle for bronze on a slope named after him. This was Lee’s first FIS World Cup medal of the season and the second of his career.

“I felt a little overwhelmed to compete in front of the passionate Korean fans,” Lee said. “Because this is the first time in a year since I won silver at the PyeongChang Olympics. When I competed on the slope that was named after me, I got so excited that it felt like my heart was going to explode. Although the PyeongChang Olympics is done, we’ll work harder to help the development of winter sports in Korea.”

A podium finish was even more meaningful for Lee as this was the first World Cup event that was hosted at the Bokwang Phoenix Snow Park since the PyeongChang Olympics. The slope that the race was held on has since been named after him to commemorate his Olympic silver medal a year ago.

Lee made history at the PyeongChang Olympics by winning a surprise silver medal in the men’s parallel giant slalom race. By winning silver, he became the first Asian athlete to medal in an Olympic alpine snowboarding event and the first Korean to ever win a medal in a snow event.

Lee entered the Olympics with expectations high after his career-best season in 2017. A year before the Olympics, Lee won gold at the 2017 Asian Winter Games in Sapporo and his first FIS World Cup medal, a silver in Kayseri, Turkey, in March 2017.

After a consistently strong 2017 season, Lee climbed up the FIS World Cup ranking to fifth in parallel giant slalom. Following the Olympics, Lee’s World Cup ranking dropped to 15th in 2018, but this year, he is slowly making his way back up, ranking 11th in the latest ranking.

Prior to Sunday’s bronze medal race, Lee’s best finish at the World Cup this season was 12th in Rogla, Slovenia, in January.

Lee is also nicknamed “Cabbage Boy” because he first started snowboarding on a slope that was used to grow cabbages. The beloved snowboarder’s fans often gift him bouquets of cabbages in lieu of the more traditional flowers.