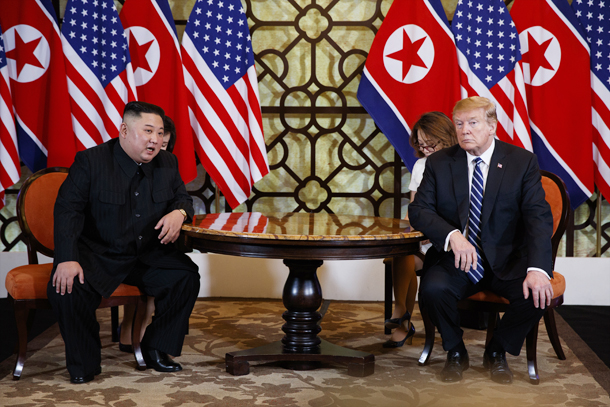 U.S. President Donald Trump and North Korean leader Kim Jong-un returned back to their hotels after their one-on-one and expanded meetings despite a luncheon and signing ceremony scheduled for Thursday afternoon on the second day of their summit in Hanoi.

Sarah Huckabee Sanders, the White House press secretary, said “no agreement was reached at this time” but that the two sides hope to meet again in the future.

After having dinner together the previous evening eight months after the June 12 Singapore summit, the two leaders met again the next morning at around 9 a.m. at the Sofitel Legend Metropole Hanoi, a French colonial-era luxury hotel.

The luncheon had been scheduled for around noon at the Metropole's Le Club restaurant, but the extended meeting between Kim and Trump and their aides went overtime, leaving reporters waiting for over an hour.

Soon after, White House pool reports indicated that the lunch and a signing ceremony for a joint statement may be canceled.

Trump was still scheduled to hold a solo press conference in the afternoon at his lodgings at the JW Marriott Hotel as planned. The time, however, was pulled up several hours earlier to 2 p.m. local time, according to the White House.

Earlier that morning, the atmosphere had been lighter. Trump, seated with Kim, said to reporters ahead of their one-on-one talks that he is in “no rush” for the denuclearization of the North, and said, “Speed is not that important. To me, I very much appreciate no testing of nuclear rockets and missiles." 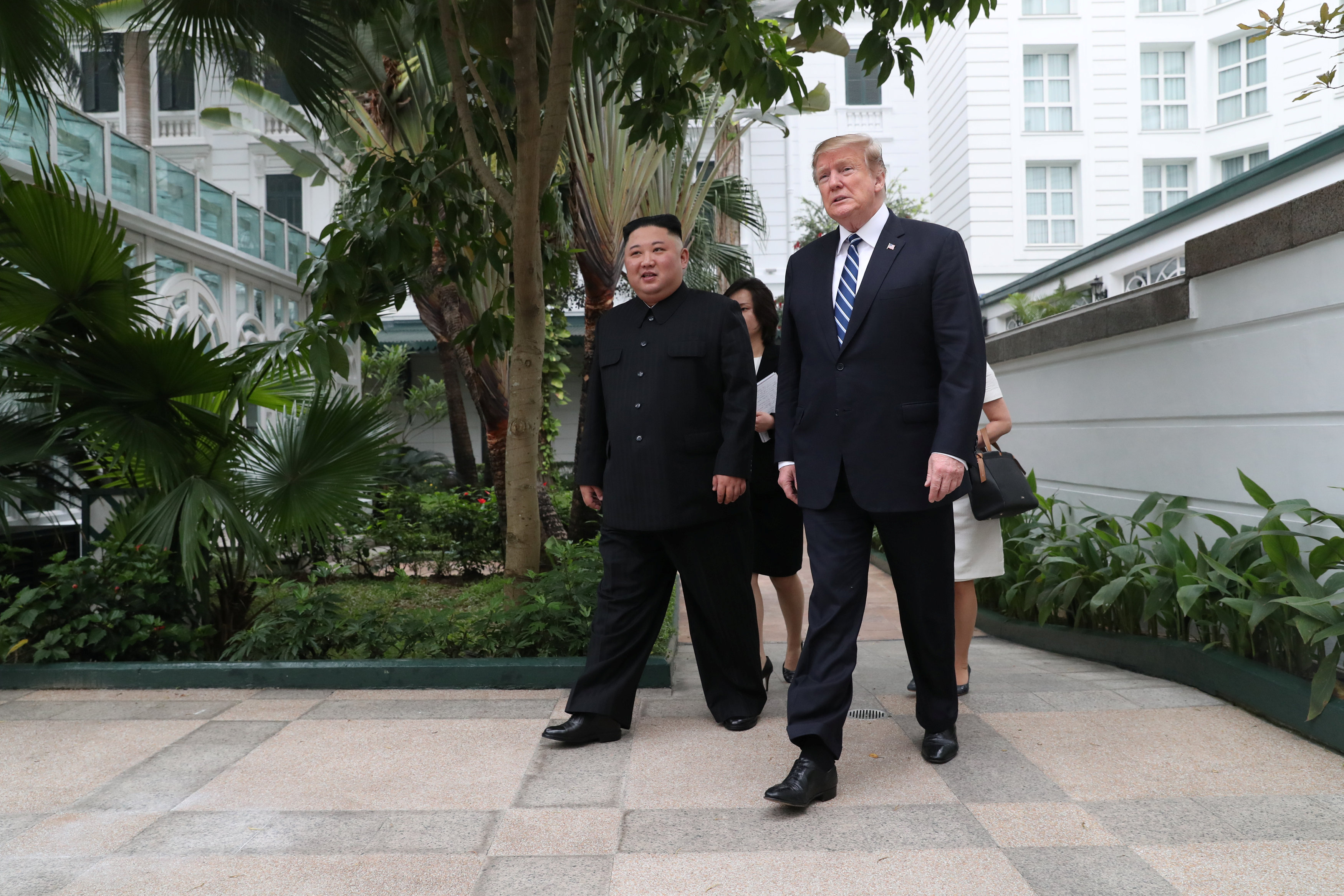 North Korean leader Kim Jong-un, left, and U.S. President Donald Trump take a walk in the garden at the Metropole hotel in Hanoi after one-on-one talks during their summit Thursday. [REUTERS/YONHAP]

Likewise, he emphasized, “What is important is that we do the right deal."

He stressed that he had a “very strong” relationship with Kim and that they had “good discussions” the previous night.

Like the previous day, Trump painted a vision of economic prosperity for North Korea, which comes as Pyongyang has been demanding the easing of sanctions.

“I can’t speak necessarily for today, but a little bit longer term and over a period of time, I know we’re going to have a fantastic success with respect to Chairman Kim and North Korea,” he said. “They’re going to have an economic powerhouse.” He added that North Korea economy in the future will be “hard to compete with for many countries.”

Trump said, “It’s something I very much look forward to helping with because with a little bit of help in the right location in the right place, I think it’s going to be something very special.”

Trump gave longer-term vision of his relationship with Kim and said, “I’m sure over the years we will be together a lot,” and also “be together after the deal is made.”

Kim said, “We had made a lot of effort so far and thought now is the time to show this, which is why we came to Hanoi and continue the wonderful dialogue for a second day.”

He said he would do his “best to ultimately bring good results today.”

The North Korean leader also showed some humor and said, “There are people who are welcoming this meeting and those who remain skeptical, but I am sure all of them would be watching this scene as if they are watching a fantasy movie.”

Following the one-on-one bilateral talks, which lasted around 30 minutes, Kim and Trump took a brief stroll outside through the hotel gardens amid humidity and heat, accompanied only by interpreters. They were spotted chatting briefly by the hotel’s pool with U.S. Secretary of State Mike Pompeo and Kim Yong-chol, the vice chairman of the North’s ruling Workers’ Party’s Central Committee, who also oversees inter-Korean affairs.

The two leaders entered the expanded meeting at around 9:45 a.m. accompanied by close aides and negotiators, where they were expected to narrow differences on steps toward the denuclearization of North Korea in return for corresponding measures from the United States.

They had been expected to hold a working lunch and sign a joint statement around 2 p.m. local time, according to the White House initially.

Trump told reporters ahead of the extended meeting, “We are discussing everything.” He also said that opening liaison offices in each country is a “good idea.”

Kim told the press he would like to get back to the talks, saying, “even one minutes is precious,” bringing laughter to the table. Pompeo, John Bolton, the U.S. national security adviser and Mick Mulvaney, the White House chief of staff, were seated at the table, as were Kim Yong-chol and North Korean Foreign Minister Ri Yong-ho.

Trump was expected to return to Washington later Thursday.

The KCNA said that the second summit took place “thanks to the ardent wishes, active efforts and extraordinary determination of the top leaders” of the two countries to “end the evil cycle of confrontation and antagonism and keep pace with the era of peace and prosperity that has newly arrived.”

The two leaders held a dinner at a small round table, only accompanied by two aides each and interpreters. U.S. Secretary of State Pompeo, Mulvaney, Kim Yong-chol and North Korean Foreign Minister Ri Yong-ho took part in this “social dinner.”

The KCNA reported that the dinner had “an amicable atmosphere” and that “sincere and deep opinions were exchanged with a view to making comprehensive and epoch-making results in the talks” in order to meet the “expectation of the whole world” for a successful Hanoi summit.

South Korean President Moon Jae-in did not release publicly any plan to monitor the North-U.S. summit on Thursday. The Blue House said Moon expects to be briefed by Trump on the results of the summit over telephone Thursday night.