Korean Go master Lee Se-dol, who was famously defeated by Google’s artificial intelligence (AI) program AlphaGo, said Tuesday that he might retire at the end of this year. 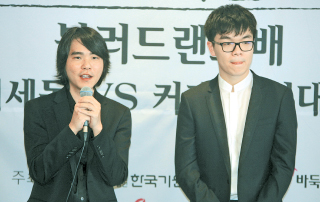 Lee, 36, made the surprising announcement after he fell to his Chinese rival Ke Jie in a special match at a Seoul hotel.

“I started playing Go when I was 6 years old, and I became a professional player in 1995,” Lee said. “That’s quite a long time. I think this year may be my last year.”

Lee said he hasn’t definitely determined his future, but hinted that he is leaning toward retiring from the game.

“I’m thinking of taking a long vacation or permanent retirement,” he said. “If I take time off and return later, I may not be the same player I was.”

Asked why he is thinking about ending his career, Lee pointed out Ke and said, “I thought it’s going to be more difficult to beat these young Go players. Personally, I also feel exhausted.”

“I was going to do that, but I decided to play one more year because I had some regrets,” he said. “It’s not something that I’ve abruptly decided. I’ve been thinking this for a long time.”

Last year, Lee had 53 wins and 38 losses in official matches.

Lee said that even if he retires, he’ll remain in the Go community.

“I will live as a member of the Go community, but I think this is my last year as a professional player,” he said. “I want to wrap up nicely, and that’s why today’s match against Ke was meaningful.”

Yet Lee did leave some possibility that he may reverse his retirement decision.

“If I retire, I can’t come back, so I have to keep thinking about it,” he said. “I still haven’t decided what I should do after I take my time off from Go.”

Lee, a professional ninth dan player, was the first human to face AlphaGo. He lost 4-1 to AlphaGo in a five-round Go tournament in March 2017 in Seoul, but still remains the first and only Go player to beat Google’s human-like algorithm.

Go, which originated in China more than 2,500 years ago and is known as baduk in Korea, involves two players alternately putting black and white stones on a checkerboard-like grid of 19 lines by 19 lines.