Lee Kang-in could get call-up for friendlies

Lee Kang-in could get call-up for friendlies

Valencia CF’s Korean prospect Lee Kang-in may get a senior national team call-up for friendly matches later this month as paperwork is under way for the selection, an official with the national football governing body said Wednesday. 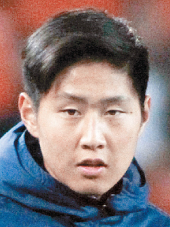 The KFA recently sent a letter to Valencia alerting the team that Lee may be selected for the upcoming friendly matches at home and asked for the Spanish club’s cooperation should the player get the nod, according to the official. Korea is scheduled to take on Bolivia in Ulsan on March 22 and will host Colombia in Seoul on March 26.

Korea head coach Paulo Bento is scheduled to announce his roster for the March friendlies Monday. Although the Portuguese head coach has yet to confirm his roster, the KFA’s recent move shows it is preparing for a possible call-up of the 18-year-old midfielder.

Last month, Bento visited Spain to check out such Korean starlets as Lee and Paik Seung-ho of Girona FC.

Lee made his first-team debut with Valencia in October 2018, though he has struggled to get playing time in recent matches.

With his debut in October, Lee became the youngest Korean to debut in European football, beating Nam Tae-hee, who was 18 years and 36 days old when he first appeared for Valenciennes FC in the French League 1 in 2009.

Lee has yet to play for Korea at the senior level. He has four goals in seven matches for the under-20 side.

If Bento decides not to include Lee for March friendlies, there’s a possibility that the player will join the U-20 team for training ahead of the FIFA U-20 World Cup.

Korea’s U-20 football coach, Chung Jung-young, unveiled his roster for a Spain training camp Tuesday without Lee. Yet Chung said he wanted to pick Lee for his team if Bento decides not to call him up for the friendly matches.

“Since we’re to have training in Murcia, Spain, I want to include Lee if it’s possible,” Chung said. “I will talk with Bento on this issue once he returns.”

The U-20 team will train in Spain from March 17 to 25, but unlike call-ups for friendly matches, Valencia are not obligated to release Lee for a training camp.

“Lee is on the U-20 reserve list for Spain training,” a KFA official said. “We are currently talking with Valencia about the player’s call-up, and we will discuss the matter further once Bento returns to Korea.”