Park Hae-min of the Samsung Lions will continue to steal bases this season. 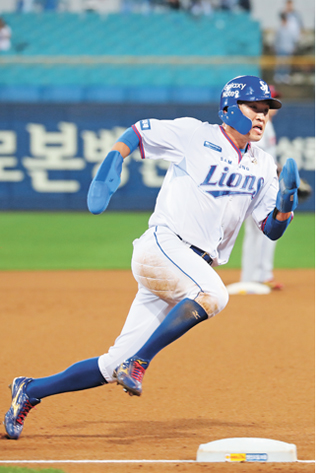 Park Hae-min of the Samsung Lions runs to a base during a game. [NEWS1]

This time last year it seemed doubtful the Lions would get their base-stealing machine this season, as Park was about to come face-to-face with his unfulfilled mandatory military service. A gold medal at the 2018 Asian Games neatly resolved that issue, as Park returns this season as the Lions’ leadoff and outfielder.

In addition to securing his starting spot with the Lions, Park also has a chance to set a new record in the KBO - win the base-stealing title for five consecutive seasons. If Park tops the league in stolen bases this season, he will become the first player ever to retain the spot for five seasons.

As Roger Bernadina, formerly of the Kia Tigers, left the KBO after the 2018 season, Park is in with a real shot at retaining his crown. For the past two seasons, Bernadina has finished runner-up in stolen bases.

Along with his fast feet, Park is also expected to improve at bat this season. Last year, Park set a personal record with 30 two-base hits, nine home runs and a .432 slugging average.

Below are edited excerpts from an interview with Park.

Q. It looks like you got bigger. Did you gain weight over the offseason?

A. I bulked up. I gained about 8 kilograms (17.6 pounds). Once the season starts, I’ll probably lose weight because I have a high activity level. This is a pattern every year, but I gained more weight this year than in other seasons. If possible, I’m thinking about losing less weight.

Does that mean you also got stronger?

Since last year, balls have been leaving my bat faster. I didn’t bulk up to hit further, but I did gain [weight] to increase speed.

Was there a specific reason why you decided to increase your batting speed?

In September last year, I think my batting average improved because I improved my batting speed. When I hit the ball harder, the fielders have to move faster so it makes it more difficult for them to catch. So I gained weight.

This season, the Lions seem to have a stronger middle order in the batting lineup. Would that make you focus more on getting on-base?

Every year, I focus on getting on-base, but this year I’ll have to be more focused. Since I’m impatient, I like hitting off the first pitch. I’ve tried to control that. Since the results are not that important, I try to control it in spring training or in exhibition games, but I’ve been paying close attention.

Wouldn’t that affect your performance in a negative way?

I’m trying to go along with the situation. Considering my personality, I like to hit. So I’m trying to control that.

Is batting speed the only thing that changed in regard to the improvement in big hits last year?

I think the other factors are timing and point of impact. I pushed my point of impact forward. Before, I was told that I got struck out a lot, so I put my point of impact a little further back to see more balls. But that didn’t really work. Since I can’t avoid a strike-out, I just told myself to swing more aggressively, and I think that allowed me to make big hits.

This season, you are competing to become the league’s first-ever player to win the base-stealing title for a fifth consecutive season. Do you think you can do it?

I want to because it’s a very honorable title. But, as I’ve always said, base-stealing is dangerous. Not only can I get injured, but it could also ruin the team’s flow. I won’t be stealing bases for myself or for my personal record while we have enough batters in the order.

In the past four seasons, you’ve topped the league’s stolen bases, but the number has been decreasing every season. Does it get harder to steal bases?

Since the pitchers and the catchers are watching more closely, it’s difficult every year. It is physically tiring if I run more. But that’s my role. Since there are difficult areas to work on by myself, I’ve been getting a lot of help from coach Kang Myung-gu.

This year, the KBO changed their official baseballs. Do you think that will have any effect on your base-stealing?

That depends on the situation and the score. If we’re in a tight spot and we need one more run, I’ll have to run more. Until now, the players haven’t felt much of a difference in the new baseballs so I think I’ll figure it out once the season starts.

Lions’ manager Kim Han-soo said the team’s center line has gotten stronger this season. What do you think?