The Korean golfers’ winning streak on the LPGA Tour may have ended but they’ve definitely set high expectations for the first major tournament of the year, the ANA Inspiration. 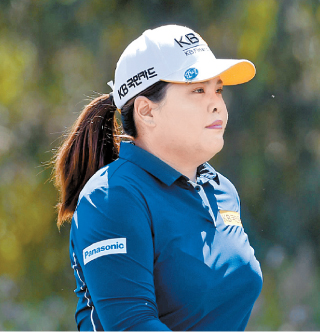 Park In-bee walks to a hole during the final round of the Kia Classic at Aviara Golf Club on Sunday. [GETTY IMAGES/YONHAP]

Korea’s top three golfers, all ranked in the world top 10 - No. 1 Park Sung-hyun, No. 4 Ko Jin-young and No. 8 Park In-bee - finished in a five-way tie for runner-up at the Kia Classic on Sunday.

Nasa Hataoka of Japan won the tournament at 18 under-par, 270.

Park In-bee, who was the overnight leader, was hoping to pick up her 20th victory on the LPGA Tour but came up three shots short of forcing the tournament into a sudden death playoff as she struggled with her putter throughout the final round.

“Just an unfortunate day with the putter,” Park In-bee was quoted as saying on LPGA.com. “Just one of those days. I just have to take it. I think it’s still very good momentum going into next week.”

For Park In-bee, a win at ANA Inspiration this year will be a good redemption and a comeback. Last year, Park finished runner-up at the tournament by losing to Pernilla Lindberg of Sweden in the eighth playoff hole. Park has won ANA Inspiration once in her career, in 2013.

Ko was seeking her second win of the season, also a back-to-back victory, but came up just short by finishing runner-up. Although she didn’t win, Ko’s continuing a strong season as she managed to record four top-three finishes in the five tournaments she has competed in so far this season.

With a win, two runner-up finishes and one third place finish, Ko moved her world ranking up significantly, becoming the second highest ranked Korean golfer in the world ranking.

Although it was a disappointment for world No. 1 Park Sung-hyun to walk away with a runner-up finish over the weekend after being tied for the lead after the second round, she is set for the ANA Inspiration.

Park is having a successful start to her season, having already won her first tournament on the LPGA Tour in March, at HSBC Women’s World Championship, and reclaiming the top spot in the women’s world ranking.

Prior to the season, Park Sung-hyun said her goal for the season was to win five tournaments, including a major, and specifically mentioned that she wanted her major victory to be at the ANA Inspiration.

Based on her performance over the past two tournaments, she seems set for this week’s major, as she finished tied for 14th at Bank of Hope Founders Cup and runner-up on Sunday.

Kim Hyo-joo also made a big jump in the final round by shooting a course record of 10 under par, 62, to finish tied for seventh. Kim started the final round 30th and moved up 23 spots.

“I felt like I had a really great rhythm,” Kim was quoted as saying. “I want to continue that going into next week’s major.”