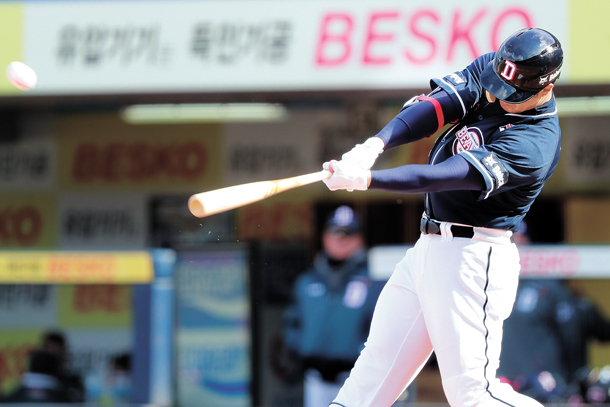 Kim Jae-hwan of the Doosan Bears hits a two-run home run during a game against the Samsung Lions at Daegu Samsung Lions Park on Sunday. [NEWS1]

The Doosan Bears may have lost star catcher Yang Eui-ji, but they’re doing just fine without him.

With a three-game sweep of the Samsung Lions at Daegu Samsung Lions Park over the weekend, the Bears are once again at the top of the regular season standings along with the SK Wyverns, at eight wins and two losses.

As Yang left the Bears for the NC Dinos, Kim worked harder than ever this offseason to prove his worth and continue the Bears’ dominance. 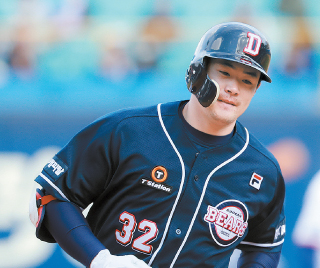 But Kim wasn’t off to the best start, with a .217 batting average with one home run and four RBIs in his first seven games.

Thanks to their new foreign player, Jose Fernandez, and to Park Kun-woo, the Bears didn’t see much trouble in terms of scoring, but for Kim it was a disappointing start because he had such strong 2018 season.

Kim finally exploded at bat on Sunday. During a game against the Lions on Sunday, the Bears were losing 0-2 after the first two innings. At the top of the third inning, while the Bears were at two outs with the bases loaded, Kim hit a grand slam to allow the Bears to take the lead. At Kim’s next at bat, he hit another two-run home run to lead the Bears to a 9-4 victory.

During the pennant race last year, the Bears won 14.5 games ahead of the Wyverns. Once again, the Bears were expected to be the top team along with the Wyverns and the Kiwoom Heroes, but a lot of experts didn’t expect the Bears to be as dominant as previous years.

Yet manager Kim Tae-hyung didn’t seem worried at all.

The Bears’ batting lineup is still strong and catcher Park Sei-hyok has been playing well after Yang left to join the Dinos. Until last year, Park was the Bears’ backup catcher.

The Bears are expected to add more experience on the mound, as Kim said before the game on Sunday that he’ll call up two veteran pitchers - Jang Won-jun and Bae Young-soo - for the game today.

“Jang Won-jun will be used in the middle of the game,” said Kim. “I’m planning on using Bae Young-soo at the start of the game but I’ll see how he pitches.”

The Dinos are off to a better start this season. Last year, the Dinos finished last in the KBO for the first time since they joined in 2013. But this year, they are tied for third after the first week with five wins and three losses, despite missing key players - Na Sung-bum and Christian Bethancourt - due to injuries.

Yang has been leading the Dinos’ lineup, hitting four home runs and nine RBIs with a .391 batting average as of Monday. On Sunday, Yang hit a two-run home run at the top of the first inning to help the Dinos win 6-3 against the Hanwha Eagles.

Although it’s only been a week since the 2019 season started, Yang has shown his worth as the league’s best catcher. With Yang behind home plate, he has successfully led the Dinos’ young starting pitchers, lowering the starters’ ERA to 4.01 from last year’s 5.48.

The LG Twins had a thrilling 6-5 come-from-behind victory against the Lotte Giants and are tied for third with the Dinos in the regular season standing at five wins and three losses. The Hanwha Eagles are ranked fifth with four wins and four losses while four teams - Heroes, Kia Tigers, Lions and the Giants - are tied for sixth with three wins and five losses. Once again, the KT Wiz are the bottom-ranked team with two wins and six losses.