Each of the 12 K League 1 clubs has played seven matches so far this season, and Jeju United is the only team without a win. 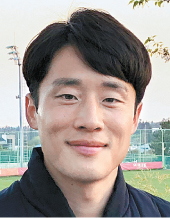 Jeju picked up no win, four draws and three losses, totaling four points, and was ranked 11th out of 12 teams. Even the bottom-ranked team, Incheon United, has won a match.

As Jeju finished in the upper half of the K League 1 last season, their start is quite disappointing.

Although Jeju is struggling to pick up a win, its forward Kim Ho-nam has accomplished quite an achievement, as he competed in his 200th K League match on April 3. It’s been almost two weeks since Kim reached the milestone, but the club still hasn’t had a win.

“When I was a rookie, I saw older players on our team compete in their 200th K League match,” Kim said. “At that time, I wondered if I could become like that. I’ve achieved something that I’ve never imagined I could, but I can’t be all happy about it. Before, I used to be satisfied if I played well, but as I play more seasons, I feel that the team has to play well for the player to be good.”

On Saturday, Jeju lost to Jeonbuk Hyundai Motors 1-0 at home. As this was Jeju’s first match at home in Jeju World Cup Stadium this season, the loss was disappointing to fans and players. Before the match, Kim received the spotlight as he played well before in his games against Jeonbuk. During Jeju’s match against Jeonbuk in October 2016, Kim scored Jeju’s winner in the 84th minute, while the two teams were tied at 2-2. At the time, Jeonbuk’s loss was a shock as they had not lost for 33 consecutive matches. Until their loss against Jeju, Jeonbuk’s record for the season was at 18 wins and 15 draws.

During Kim’s play with military club Sangju Sangmu, Kim also scored the winner in September 2017 against Jeonbuk in stoppage time to lead Sangmu to a win. Throughout Kim’s career in the K League, he scored 40 goals and five were against Jeonbuk. However, on Saturday, Kim’s dominance against Jeonbuk was nowhere to be seen. Kim created multiple scoring opportunities and never came off the pitch, but he wasn’t able to score.

“I really wanted to win the team’s first match [of the season] in front of the home fans,” Kim said. “Personally, I wanted to repay their loud cheers and support with a goal, but since I couldn’t achieve any, I feel a bigger responsibility.”

Although it was disappointing for Kim and the team to lose their first home match of the season, Kim has no time to be discouraged. This season, Kim is serving as the key bridge between the rookies and the veterans.

As Jeju was in a tougher situation last year, Kim encourages the younger players by telling them about his experiences. From July 11 to Sept. 26 last year, Jeju was in a 15-game winless streak.

While Jeju had lost 10 games straight, Kim finally returned to Jeju on Sept. 5 after serving his mandatory military service with Sangmu. Although Jeju’s no-win streak continued for five more matches, Kim still helped the struggling club finally turn around, concluding the season in the upper split of K League 1, at fifth.

“We try to communicate with the rookies a lot,” Kim said. “We try to relieve their stress by drinking coffee and eating together. We encourage them by telling them that we [the veterans] will play better so the young players don’t think that the team’s struggle is their fault.”

Kim hopes to see his first goal of the season this weekend, when they play against Gangwon FC at home in Jeju. So far, Kim has competed in all seven matches but hasn’t scored a goal.

“Personally, my goal is to score 10 goals and pick up five assists,” Kim said. Jeju will continue their season with a K League 1 match against Gangwon FC at Jeju World Cup Stadium on Sunday at 2 p.m.