Korea came back from a two-goal deficit to shock Slovenia 5-3 for its second straight victory at the men’s hockey world championship in Kazakhstan on Tuesday. 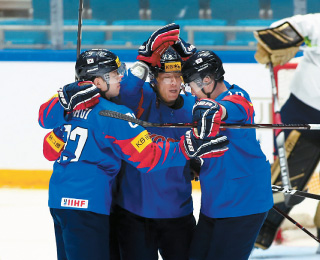 Down 3-1, Korea poured in three unanswered goals in 2 minutes and 20 seconds midway through the second period at the International Ice Hockey Federation (IIHF) World Championship Division I Group A tournament at Barys Arena in Nur-Sultan.

Defenseman Kim Hyun-soo scored the go-ahead goal at 10 minutes 8 seconds in the middle frame, and Shin Sang-hoon scored an empty-netter with 38 seconds remaining to seal the 16th-ranked Korea’s first win over No. 15 Slovenia in seven meetings.

This is the second-highest level of IIHF world championships, and the top two nations, after the round robin play, will be promoted to the elite division for 2020. The last-placed team from Division I Group A will be relegated to Division I Group B for next year.

Coached by Jim Paek, a two-time Stanley Cup champion in his playing days, Korea made its debut in the top IIHF World Championship last year but got immediately relegated after losing all seven games by a combined score of 48-4.

Korea opened the scoring against Slovenia at 4 minutes 35 seconds in the first, with captain Kim Sang-wook setting up his older brother, Kim Ki-sung, in the slot.

The Koreans shot themselves in the foot by taking three consecutive penalties in the first period, and Slovenia took full advantage with two power play goals.

The first came from David Rodman, who one-timed a pass from the Los Angeles Kings’ All-Star center Anze Kopitar at 8 minutes 32 seconds.

Less than four minutes later on another power play, Ken Ograjensek got the go-ahead goal. And Robert Sabolic made it 3-1 for Slovenia at 16 minutes 3 seconds, with Rodman and Kopitar picking up the assists.

Korea refused to fold. Defenseman Kim Won-jun started the rally 7 minutes 40 seconds in the second period, as he skated into a loose puck at the top of the right circle and fired one past goalie Matija Pintaric.

Kim Sang-wook, who had two goals and two assists against Hungary on Monday, got his third goal of the tournament on a power play at 9 minute 32 seconds. Kim Ki-sung had a couple of shots at the top of the crease, and Kim Sang-wook poked home the rebound when he was left wide open in a goalmouth scramble.

Slovenia challenged the goal on a possible goalie interference by Kim Ki-sung but the original call stood.

Kim Hyun-soo then completed the comeback at 10 minutes 8 seconds in the second. After a faceoff win in the left circle, Kim slapped the puck through traffic to beat Pintaric for an improbable 4-3 Korean lead.

Canadian-born Korean goalie Matt Dalton stood tall in the net in the third, and Korea could finally breathe after Shin’s empty-net marker.

Brothers Kim Ki-sung and Kim Sang-wook each had a goal and an assist, while Dalton made 40 saves.

Korea’s next game is today against Kazakhstan.