Park In-bee is willing to defend her Olympic title

Park In-bee is willing to defend her Olympic title

Reigning Olympic champion and former world No. 1 Park In-bee said Tuesday that she is willing to defend her title at next year’s Olympic Games in Tokyo. 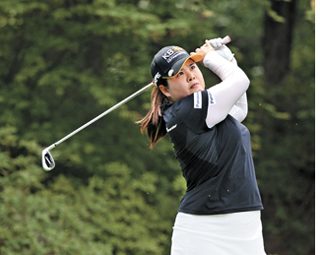 Park In-bee watches her shot during her first match at the 2019 Doosan Match Play Championship at Ladena Golf Club in Chuncheon, Gangwon, on Wednesday. [NEWS1]

“When the Rio Olympics ended, I thought the next Olympics four years later was too far off. I doubted whether I could be still active until then,” Park said at a press conference ahead of the Doosan Match Play Championship of the Korea LPGA (KLPGA), which started on Wednesday in Chuncheon, Gangwon.

“But as the next Olympics is getting closer, I think it is worth a try.”

After an injury-plagued 2017 season, she recovered to pick up her 19th career LPGA win last year and briefly returned to the No. 1 spot in the world rankings.

She now ranks sixth, which is high enough for her to get a berth for the national golf squad for the Tokyo Olympics.

The world’s top 15 players are automatically qualified for the Olympic event, with a limit of four per country. Korea has six players in the top 15, including the current No. 1 Ko Jin-young and No. 3 Park Sung-hyun.

“I know making it to the national team is harder than winning the Olympic gold,” she said. “I must be very happy and pleased to have a chance to play at the Olympics and defend my title.”

Moreover, if she manages to compete in her second Olympics in Tokyo next year, she will be eligible for membership of the Athletes’ Commission of the International Olympic Committee (IOC). Korean Ryu Seung-min, an Olympic gold medalist in table tennis, was elected to the IOC commission in 2016.

“I’ll think of it after I become a two-time Olympian and have the qualification for it,” she said. “If I were given the opportunity, it would be like doing the impossible.”

Park, already a member of the Hall of Fame, enjoyed her most successful season in 2013, when she won three majors and swept LPGA’s Player of the Year award and money title. She holds 19 LPGA titles, including seven major trophies since her LPGA debut in 2007.

This weekend, Park is in Korea to defend her title at the 2019 Doosan Match Play Championship. She is off to a great start as she won her first match 4&3 against Heo Da-been on Friday.