Can Han manage another miracle?

Can Han manage another miracle? 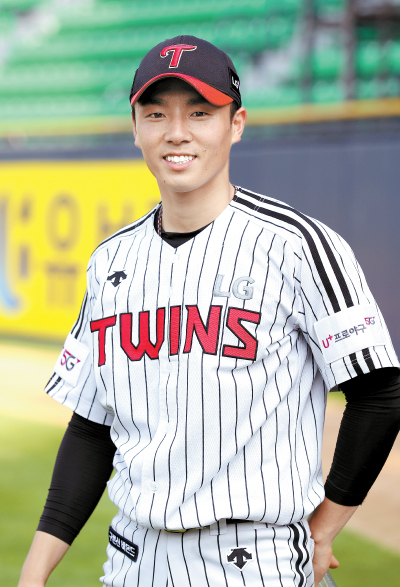 LG Twins’ developing player Han Seon-tae was already beating the odds when he was drafted by the club in September last year, but now he’s looking to take things a step further by actually making his KBO debut.

Like most careers, there are certain qualifications that KBO players need to have. First comes a high school baseball career — every domestic player learns the ropes in the school leagues. Many KBO stars are drafted straight out of school, while some may go on to play in college or in the Futures League before they reach the top teams. Typically, the only exception to this career path is the very few players who go straight from high school to the United States.

Han didn’t exactly play by these rules. The sidearm pitcher is the first player in KBO history to be drafted despite not playing ball in high school.

Han first encountered baseball in the ninth grade, when he watched a World Baseball Classic (WBC) game between Korea and Japan.
As he watched the game, young Han decided that he wanted to be a baseball player. He quickly headed to Bucheon High School in Gyeonggi, the closest high school to his home with a baseball team, to seek a spot on the squad.

Han was immediately rebuffed — the coaching staff told him that he was too old and wouldn’t even allow him to try out for the team.

But it wasn’t until the KBO foreign league returnee tryouts on Aug. 20 of last year that Han began to be noticed by KBO scouts. In addition to his interesting baseball résumé, Han showed his potential by pitching at almost 150 kilometers per hour. Despite his potential, there weren’t many clubs that actually intended on drafting Han as there were a lot of foreign league returnees and high school rookies who had more impressive résumés than Han.

Right when Han was about to give up, the Twins swooped in. The Twins drafted Han in the 10th round, making him the league’s first-ever player to be drafted without any high school or college career.

There were doubts about the Twins’ selection, but Han is proving his worth in the Futures League this season. In 16 games, he has a 0.45 ERA in 20 innings.

“[He has] a great shoulder and good fastballs,” Choi said.

The chances of Han actually making his KBO debut seemed highly unlikely at the beginning of the year, but he may just be able to pull off another miracle. To be called up to the KBO, a player must be registered as an official player, and each team has 65 spots available each season. This season, the Twins have only registered 64 players, meaning there is another spot available.

Below are edited excerpts from an Ilgan Sports interview with Han.

Q. How did it feel pitching in the Twins’ bullpen?

A. Our coach in the Futures League told me to go study at Jamsil, so I went. I was a little nervous but was excited at the same time.

How’s the speed of your pitch?

Your statistics in the Futures League are impressive. How are you playing in each game?

I feel nervous in each game. Since I get very nervous in the bullpen when I’m preparing, I keep telling myself that I can do it with mind control. It’s just really fun when I can throw to a spot I wanted to or a hit gets out from a good defense.

Looking at the statistics, you’ve given up four walks while striking out 18 and showed stable control. How are you managing it?

There’s a difference to the mound in Japan. Since the mounds in Japan, where I played in the independent league, are softer, the dirt on the ground starts making deeper holes as the game goes on. Since our balance is nothing like when I warmed up in the bullpen, I didn’t have good control. But in Korea, it’s harder. Since it’s harder, even when I get on the mound in the eighth or the ninth inning, I can keep my balance similar to when I practiced.

At the end of last year, you were invited to [the Twins’] end of year camp but were excluded right after you joined the training. How did you feel?

On the first day when the members attending the end of the year camp in Kochi Prefecture, Japan, gathered for training at Jamsil Baseball Stadium, we had weight training. We all had a similar intensity of weight training but I guess I may not have been ready; I had really bad muscle pain. When I asked the other pitchers, they said they also had muscle pain.

Since I’ve never had structured training sessions, think about how bad my pain was. So the next day, I was told that I need to build basic physical strength and headed to Icheon [Gyeonggi]. At the time, some wondered how I was going to Icheon only after a day of training. But now, my physical strength has gotten a lot stronger.

What are the areas that you think you need to work on?

I’ve tossed curves, sliders, change-ups and two-seam fastballs. But when I came up to the KBO, pitching coach Choi Yil-yeon explained to me about the change-up and curve. Since I started baseball later, my command of breaking balls is definitely slower. So I’m in the process of learning. I’m trying hard to pick it up quickly as I learn.

You’ve made it into the professional league after playing amateur baseball and in the independent league. How different does it feel now that you’ve actually experienced all three leagues?

First, they’re better at defense. They make great catches with normal fly balls. In amateur baseball, I got worried [with fly balls] so when our players catch those in LG, I feel thankful to the players. Since we need to move around within a certain time limit, we don’t get that much time to rest. When the home games are done on weekdays, we eat dinner at 5 p.m. and from 7 p.m. to 8:30 p.m., we work out. We go to bed just a little after 9 p.m. We’re given about an hour or less of rest time in between.

When you were drafted, you said you wanted to be a hope to the non-player draftees. Do you still have the same goal?

If you just look at the progress you’ve made so far, are you somewhat closer to where you wanted to be?

It’s super fast. My goal at the beginning of the season was to play in 25 Futures League games. But since I’m pitching better than expected, I’m getting more opportunities to play.

It doesn’t have to be this year but I really want to play in the Futures League All Stars game. Also, if I get a chance, I want to maintain my statistics like this and get registered as a player and have an opportunity to play in the KBO, sometime in the second half of the season. I also want to go to the end of the year camp. But I’m not going to rush. I’ll learn and work hard now and try hard to throw great pitches later.