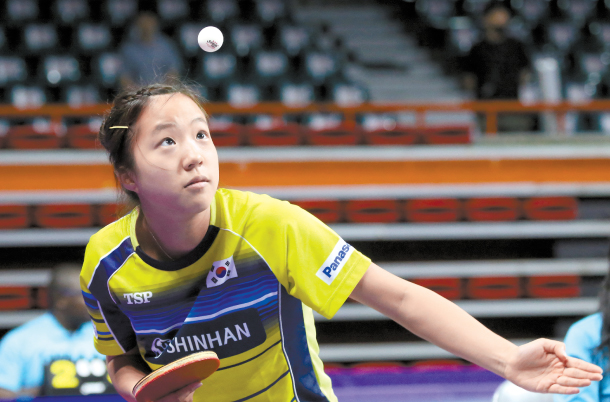 Shin Yu-bin shot to fame in 2009 as the five-year-old table tennis player who could hold her own against legends of the sport like Hyun Jung-hwa. A decade after her first brush with fame, the table tennis prodigy is still on the rise.

By finishing third at the national team qualifier for the Asia championship last month, Shin became the youngest player ever to join the national team in Korea, at age 14 years, 11 months and 16 days. Prior to Shin, the record was set at 15 by Yoo Nam-kyu, the current head coach of the women’s national team, and Lee Ailesa, former player.

“I can’t believe that I’m on the national team” Shin said. “It’s just amazing. I’ve finally achieved one of many goals in life. I’ve been given the chance earlier than expected but this is just the beginning. In my head, I’m only thinking about how to get better at table tennis.”

Currently, Shin is competing at the Seamaster 2019 ITTF World Tour, Shinhan Korea Open at Sajik Arena in Busan, which started Tuesday. As the tournament brings together the world’s top players from China, Japan and Germany, it is considered a preview for the Tokyo Olympics next year.

Throughout Shin’s career, she’s been the youngest ever player to a number of Korean table tennis milestones. In third grade, during the 2013 national championship, Shin caused an upset by winning her first round against a college student. Then, in 2017, Shin was selected for the junior national team and last year, she was added to the senior national team. At age 14 in November last year, Shin finished as a semi-finalist in the women’s singles at the ITTF Challenge Series Belgium Open.

During the national championship in December, Shin finished as a runner-up in the mixed doubles, partnering with Cho Dae-seong.

Unsurprisingly, Shin is considered the future of Korean table tennis.

“She has a big physique [1.70 meters (5 feet 7 inches) tall] and most of her skills are just as good as adult players,” said Cho Eun-rae, coach for the women’s team. “Her forehand drive is normally hard for opponents to receive. Recently, she’s added strength to it.”

Table tennis has been around Shin for her entire life as her father used to be a player. As Shin’s father operated a table tennis venue, she was never far from a game.

“When my friends were watching animations, I watched video clips about table tennis,” Shin said. “For me, table tennis videos were so much more fun. When I watched good skills, I would stop eating and try to imitate them.”

Still, Shin talks to her father about table tennis every day. Shin’s also been putting more effort into becoming a better player. She’s increased the hours she trains for and has changed her mindset when playing.

“At the beginning of the year, I had chances to be selected onto the national team, during the world championship qualifier,” Shin said. “But I struggled at the end so I missed my chance. I started making mistakes because I was getting nervous. This time, I decided to play with confidence, without any regrets. Then, I started winning.”

It might have been thanks to her selection onto the national team, but Shin said her affection toward the sport has grown bigger than ever and she is enjoying playing table tennis more every day.

“To build strength, I’ve been running and those kinds of training sessions are difficult,” Shin said. “But since this is allowing me to get better and play better in matches, I’m starting to like table tennis more.”

Although Shin is still young and is still developing, her next goal is to compete at the Olympics. She believes that a good finish at the Olympics will allow her to achieve another goal, to meet BTS.

“If I play well at the Olympics, it might be possible to meet BTS,” Shin said. “I get nervous just thinking about it. For now, my priority is to win a berth onto the Olympics. I’ll have a lot of chances from now on. If I continue to enjoy training with my teammates at the training center, I’ll see good things happening one day.”

Shin hopes to be the best in the sport one day.

“If possible, I want to be standing at the very top,” Shin said. “I’m hoping that it could be at a big event like the Olympics.”