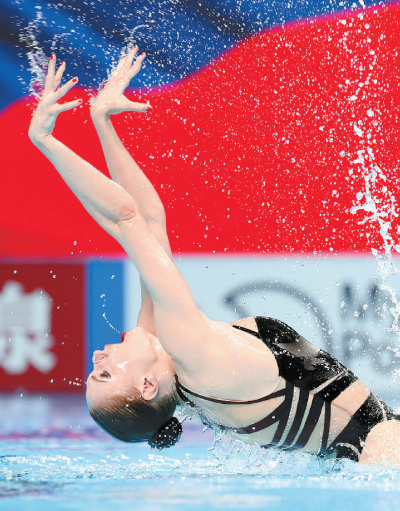 Svetlana Kolesnichenko performs in the women’s solo technical final in artistic swimming at the 18th FINA World Aquatics Championships at the Yeomju Gymnasium on Saturday. [YONHAP]

Having finished her preliminary round first, Kolesnichenko continued her streak in the final to pick up her first gold at the Yeomju Gymnasium.

By receiving a total score of 95.0023, Kolesnichenko finished a good 2.5021 points ahead of the silver medalist.

Kolesnichenko entered the competition as the most likely artistic swimmer to win the solo technical.

This is Kolesnichenko’s fifth world championships - her first was in 2011.

During the 2017 World Championships in Budapest, she took home four gold medals and at the 2016 Rio Olympics, she won gold in the team event. Throughout her five world championships, she has won 14 gold medals.

In addition, Russia continued its streak of gold medals in solo technical since it was first added to the world championships in 2007.

This was the first medal event in artistic swimming.

Kolesnichenko will continue at the World Championships as she is scheduled to compete in women’s duet technical and duet free.