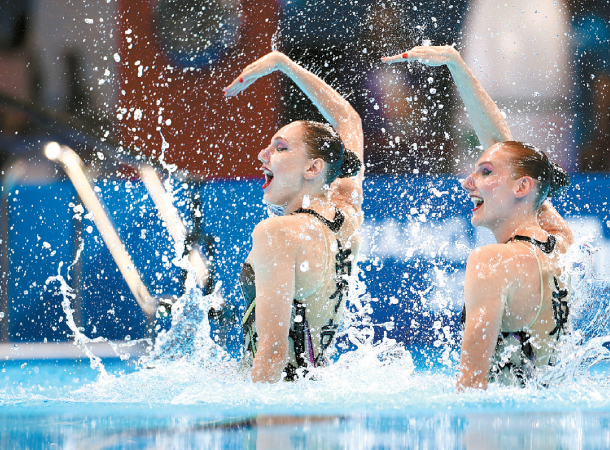 Having cruised through the preliminary round with a score of 95.9501, the duo continued its streak of success in the final by receiving a score of 95.9010, finishing 1.8938 points ahead of China.

Russia’s duo entered the event as the favorites to win gold at the World Championships. With another first place finish in women’s duet technical, Russia continued its streak of dominance in the event. The country has never missed the top of the podium since the event was added to the championships in 2007. The duo’s gold brings Russia all-time gold medal count in artistic swimming to 53.

With the experience of each of the swimmers, it’s easy to see why Russia was the favorite.

This is already Kolesnichenko’s second gold medal at this year’s World Championships. Earlier on Saturday, she won the first gold medal event in artistic swimming, solo technical. Her all-time gold medal count at the world championships is 15.

Gwangju is Kolesnichenko’s fifth world championships. During the 2017 World Championships in Budapest, she took home four gold medals and at the 2016 Rio Olympics, she won gold in the team event.

Romashina’s record is equally as impressive. This is the first time since 2015 that Romashina has competed at the world championships, as she took some time off from the sport for a maternity leave.

By adding another gold to her collection, Romashina has now won a total of 19 gold medals in artistic swimming, tying the all-time medal record held by her former partner, Natalia Ishchenko

Romashina is expected to compete in the upcoming solo free and duet free events, once again alongside Kolesnichenko.

Should she take home gold in either event, Romashina has a shot at setting a new record for the most gold medals won in the sport of artistic swimming.