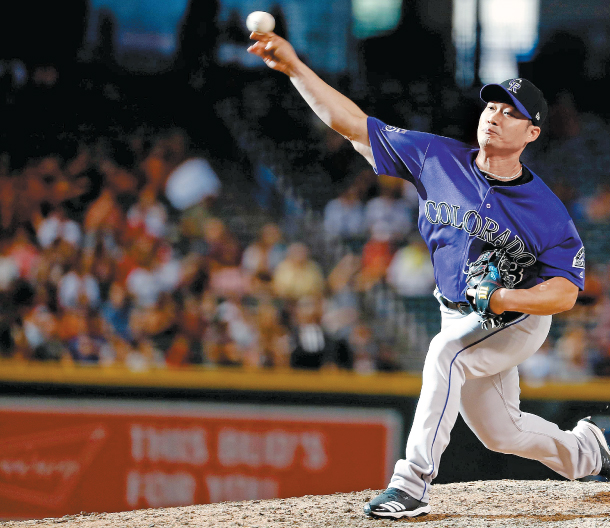 Oh Seung-hwan, formerly of the Colorado Rockies, throws a pitch during a game against the Arizona Diamondbacks at Chase Field in Phoenix on Sept. 23, 2018. [GETTY IMAGES/YONHAP]

The struggling Samsung Lions are hoping their fortunes will improve with the return of former star player and MLB pitcher Oh Seung-hwan - but the former Colorado Rockies player won’t be able to throw a single ball for the Lions until next year.

The Daegu club announced the return of Oh on Tuesday on a one-year, 600 million won ($494,000) contract. However, as Oh is unable to play any games this season, he will likely only receive around 300 million won this year.

Back in 2016, Oh was given a 72-game suspension by the KBO for overseas gambling. Under Korean law, it is illegal for Korean citizens to gamble in casinos, whether they are inside or outside of the country, except for at the government-sanctioned Kangwon Land.

When the KBO suspended Oh, he didn’t actually play in Korea, so all 72 suspended games are still outstanding. As the Lions still had 42 games left to play this season when they sighed Oh on Tuesday, he won’t be able to make an appearance on the mound until late April or early May 2020.

During this time, Oh is expected to undergo elbow surgery.

“I’m glad to be wearing the Samsung uniform again,” Oh said. “I’m thankful to the club for welcoming my return. I’ll focus on the surgery and rehabilitation and try my best to play well next season.”

Oh, known as the Stone Buddha for his unflappable approach at the plate, made his professional debut with the Lions in 2005. Playing for the club until 2013, Oh had a 1.69 ERA with 277 career saves, the most in KBO history. With Oh, the Lions won five Korean Series titles.

Oh continued his dominance in Japan’s Nippon Professional Baseball league in 2014 and 2015, picking up 80 saves. Oh finally achieved his dream of playing in the majors in 2016, signing with the St. Louis Cardinals. During his first year in the big leagues with the Cardinals, Oh picked up six wins, three losses, 19 saves and 14 holds with a 1.92 ERA.

But Oh’s career with the Jays didn’t last long as he got traded to the Colorado Rockies while in season in 2018. Despite the trade, Oh finished strong by picking up two wins, eight holds and one save with a 2.53 ERA for the Rockies. During the 2018 season, Oh appeared in a postseason game with the Rockies, becoming the first Korean to do so in Korea, Japan and the United States.

However, Oh wasn’t able to continue his stride this season and was ultimately designated for assignment by the Rockies and forced to return to Korea.

Across Oh’s career in Korea, Japan and the United States, he picked up a total 399 saves.

Although Oh’s return to the Lions is good news for the club and fans, the Lions will still have to work something out for the rest of this season, and the biggest issue seems to be with their foreign players.

Since the Lions appointed Kim Han-soo as manager in October 2016, they’ve struggled with foreign players. Over the past three seasons, the Lions spent at least $4.6 million on their foreign talent.

It all started in 2016, the year before Kim was appointed as manager. Throughout the 2016 season, the Lions had four different foreign pitchers rotate through the team and their foreign fielder, Aarom Baldiris, only appeared in 44 games due to an Achilles injury.

As a result, the Lions ended up missing the postseason for the first time in seven years, finishing in ninth place.

Things only got worse when Kim took over. The Lions signed two new foreign pitchers - Anthony Ranaudo and Zach Petrick - but saw little success. Ranaudo left the club due to injury, and Petrick played through the season but picked up just two wins and three losses with a 6.80 ERA. The two players cost the Lions at least $1.5 million.

In Kim’s second season, the Lions once again signed new pitchers - Tim Adelman and Lisalverto Bonilla. Although the two pitchers both played the full season, both proved inconsistent.

During the 2017 season, the Lions just missed out on the wildcard spot after falling behind the Kia Tigers in wins.

The biggest reason behind the Lions’ failure was the foreign players. At the time, the Tigers’ foreign pitcher Hector Noesi had picked up 11 wins on his own, while the Lions’ two pitchers only managed 15 between the two of them.

This season, Kim’s last as manager, the Lions are struggling again. The team has already parted with pitcher Justin Haley on July 25 and replaced him with outfielder Mac Williamson.

As the Lions signed an outfielder to replace a pitcher, they now have two foreign fielders, but only one of them is allowed to play at the same time as their other foreign pitcher, Deck McGuire.

McGuire, the team’s only foreign pitcher, was sent down to the Futures League on Aug. 2. Although McGuire has not been released, Kim hinted that he’ll rely on Korean pitchers for the rest of this season.