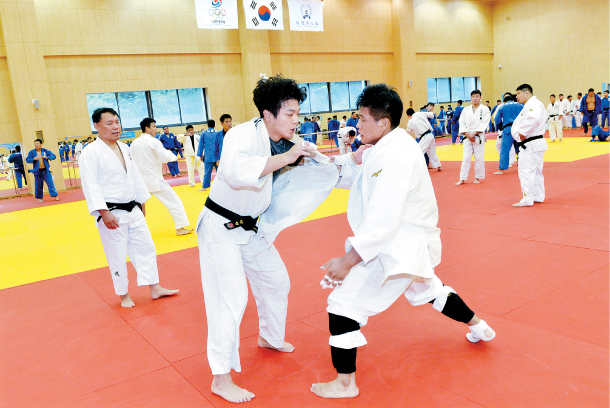 Korean judokas train at the National Training Centre in Jincheon, North Chungcheon, ahead of the World Judo Championships which starts on Aug. 25. [KIM SUNG-TAE]

As tensions between Korea and Japan heightened over recent weeks, some ruling Democratic Party lawmakers have been calling on the government to boycott the 2020 Tokyo Olympics.

But at the National Training Center in Jincheon, North Chungcheong, the Olympic countdown clock is still ticking.

The move to boycott the Olympics really began in July, when Japan restricted exports of key materials to Korea. Earlier this month, it also removed Seoul from its so-called white list of trusted trade partners. Making matters worse, concerns of radioactive contamination from the Fukushima Daiichi nuclear accident in 2011 have also been put forward as a reason to boycott the Games.

But for professional athletes, the Olympics represents a once-in-a-lifetime opportunity that, for many, is the culmination of their entire career. While they might be concerned about the current political situation or safety issues, very few of Korea’s potential Olympians are willing to give up an opportunity that they’ve trained for years for.

“I’m aware of the Korea-Japan relationship and the public sentiment,” said one athlete who requested anonymity. “But I think sports and politics have to be separated. We, the athletes, have been working hard over the past four years - or for some, forever - only thinking about the Olympics. The majority of the athletes will think that boycott is an extreme decision.”

Yet despite that desire to draw a line between politics and sports, a number of Korean sporting clubs have already pulled out of commitments in Japan.

Some sports teams, including top KBO clubs, have already canceled their offspring training in Japan or said that they will do so if nothing changes in the next few months. Clubs from across the sports spectrum have also dropped out of tournaments in Japan or friendly matches against Japanese teams.

For some sports, pulling out is a much more serious decision. If the Korean judo team does not head to Japan to compete in the World Judo Championships on Aug. 25, it gives up a shot at a spot in the Olympics. The winner of the event will not only earn a spot at the Olympics but will also be given 2,000 ranking points, which is three times more than other judo events.

Due to this, the Korean judokas are left in an awkward position, since not competing at the world championships could also mean they have no chance of competing at the Games. This would be a big blow not just for the judokas, but also for the whole of Team Korea - at the 2016 Summer Olympics, Korea took two silvers and a bronze medal in judo.

When it comes to the radioactivity scare, Korea isn’t the only country to raise concerns about the health risk to athletes following the 2011 Fukushima Daiichi nuclear accident. The biggest concern for the majority of athletes is the The Tokyo Organising Committee of the Olympic and Paralympic Games’ decision to provide food using ingredients from Fukushima Prefecture.

Baseball, softball and football events will also be held in the prefecture.

“It is true that radioactivity and food is concerning us,” said a former Olympic medalist. “Although the Olympics is a once-in-a-lifetime opportunity, it is hard [for athletes] to decide whether to risk their lives to compete, especially in a situation where safety measures are not verified.”

The decision to host baseball games at the Fukushima Azuma Baseball Stadium hasn’t put off Korea’s top baseball players. For the last 11 years, baseball has not been competed at the Olympics. Its return at the 2020 Tokyo Games for the first time since the 2008 Beijing Olympics is a huge opportunity for the current crop of Korean baseball players.

As the Games then heads to Paris, where baseball is not especially popular, in 2024, it’s likely Tokyo 2020 will be the last shot any of Korea’s current players will get at an Olympic home run.

“I was deeply moved after watching the senior players win gold at the 2008 Beijing Olympics,” said a baseball player who is highly likely to be added to the national baseball team. “Baseball might get excluded from the Olympics again. I am worried about the radioactivity, but my desire to compete is bigger.”

If a country boycotts the Olympics, the athletes have to give up the pride of representing their country and the various perks that come with the role, like prize money, pensions and military service exemptions.

But that might only be the start. The International Olympic Committee (IOC) or the international organization for each sport can choose to penalize a country by suspending it from competing in other international competitions in the future.

Shin Chi-yong, the head of the National Training Center, also encouraged the athletes to continue working hard for the Tokyo Games.

“There’s still a year left until the Olympics,” said Shin. “Our athletes should be thinking that they’ll compete and work hard in preparing for it. Since concerns regarding using food ingredients from Fukushima can affect the [athletes’] performance, we will consider expanding the support of kitchen management and providing our own lunch boxes.”

“We could boycott the Olympics, but I have a stronger desire to prove that we’re stronger by defeating Team Japan in Japan.”

Due to the radioactivity concerns, the Ministry of Culture, Sports and Tourism and the KOC are considering running their own cafeteria to provide food for the athletes using ingredients from Korea.

Despite the political pressure, the ministry on Monday said Korea will participate at the Tokyo Olympics next year. The decision was made with the KOC as they believed that boycotting is not favorable to Korea. But with months to go before the Games, this decision could still change.

According to the ministry, there hasn’t been a country that has shown any indication it might boycott the Tokyo Games.

Boycotting the Olympics would also put Korea at odds with the IOC. During his Liberation Day speech on Aug. 15, President Moon Jae-in once again repeated his goal to jointly host the 2032 Summer Olympics with North Korea. In order to fulfil this goal, Seoul will need to be able to rely on the cooperation of the IOC.