Korean striker Kim Shin-wook rode a hot scoring streak in China to a spot on the men’s national team. 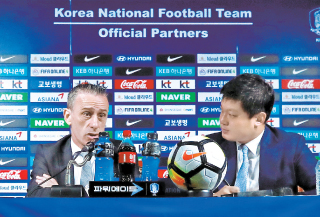 Head coach Paulo Bento unveiled his 26-man roster Monday at the Korea Football Association (KFA) House in Seoul, ahead of a World Cup qualifying match next month, with Kim being named as one of three forwards.

Korea, world No. 37, will travel to Ashgabat to play No. 132 Turkmenistan on Sept. 10 to start Group H play in the second round of the Asian World Cup qualifying campaign. Five days before that, Korea will take on world No. 94 Georgia in Istanbul for a tuneup.

Kim, 31, has been on fire since leaving his K League 1 club Jeonbuk Hyundai Motors for Shanghai Greenland Shenhua in the Chinese Super League in July. He netted eight goals in his first five matches while playing for his former Jeonbuk boss, Choi Kang-hee, and the goal scoring prowess wasn’t lost on Bento.

Kim last played for Korea in June 2018 at the FIFA World Cup in Russia.

Bento said the time was ripe for him to select Kim, adding that he’d been keeping an eye on Kim and the forward had been on the reserve list for the national team on multiple occasions in the past.

“We’ll see how well Kim can fit into our system, but at the same time, we as a team have to find the right combination that will help Kim maximize his skills,” Bento said. “He’s obviously a different type of forward than the ones we selected previously. My job is to make whatever decisions that I think can help the team.”

Kim is joined on the attack by some usual suspects, including attacking midfielder and captain Son Heung-min and new French league striker Hwang Ui-jo.

Hwang, who left Japan to sign with Bordeaux in the Ligue 1, scored his first goal in France last Saturday. Hwang leads all players with seven goals in 16 matches on Bento’s watch.

Lee Jeong-hyeop of Busan IPark in the K League 2 is the other forward. This is Lee’s second consecutive call-up after friendlies in June.

Valencia CF’s teenage midfielder Lee Kang-in got called up to the senior team for the second time. The 18-year-old, who won the Golden Ball at the FIFA U-20 World Cup in June as the best player of the tournament, was named to Bento’s team in March but didn’t play in either of the friendlies against Bolivia or Colombia.

The match against Georgia in Istanbul will be Korea’s first against a European nation since Bento took over the reins last fall.