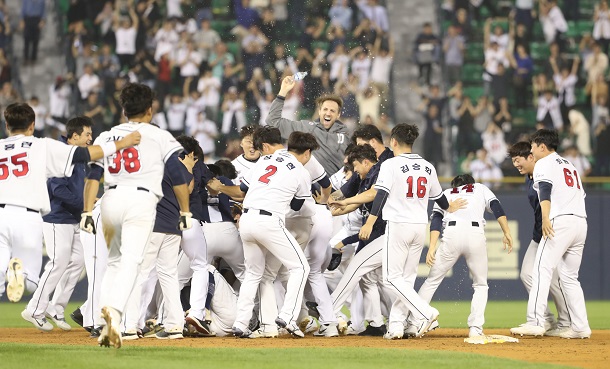 Doosan Bears players dive on Park Sei-hyuk after he hits his the winning RBI to defeat the NC Dinos 6-5 and win the 2019 KBO regular season at Jamsil Baseball Stadium in southern Seoul on Tuesday. [YONHAP]

In a dramatic turn of events, the Doosan Bears won the KBO regular season on Tuesday, beating the SK Wyverns who had held onto first place since May 30.

Heading into their final game 0.5 games behind the Wyverns, the Bears had to beat the NC Dinos to win the regular season title.

The Bears didn’t get off to the best start, as starting pitcher Seth Frankoff gave up two runs in three and one third of an inning, to give the Dinos a 2-0 lead.

The Bears had multiple chances to score but it wasn’t until the fifth inning that the Bears started to catch up when Park Kun-woo hit an RBI single to help bring the Bears back into the game.

The Seoul club was finally able to tie the game at the end of the seventh, when a series of errors from Dinos pitcher Kim Geon-tae gave the Bears their second run.

But the Dinos didn’t give up. They quickly made up for the errors by scoring three runs at the top of the eighth inning.

It seemed as if the Bears had lost their shot at winning the regular season, but a remarkable bottom of the eighth tied things back up.

Park Sei-hyok started the inning with a ground out followed by a single from Kim Jae-ho. Then, with a few base knocks and a series of errors from the Dinos’ infielders, the Bears also added three runs to tie the game once again.

After finishing the top of ninth without giving up a run, the Bears fought back.

After a fly out from Oh Jae-il, pinch hitter Kook Hae-seong hit a double. With Kim Dae-han substituted in for Kook as a base runner, the Bears’ catcher Park Sei-hyok stepped up to the plate to finish the game with a walk-off RBI single.

With Park’s hit, the Bears finally took the lead for the first time in the game 6-5 to win the regular season title.

Pitching just one inning, Lee Young-ha picked up his 17th win of the season.

The win allowed the Bears to finish their regular season at 88 wins, a draw and 55 losses, which ties the record with the Wyverns. However, as the Bears are ahead of the Wyverns in the head-to-head standing for the season, the Bears were declared the champion.

Tuesday’s results will undoubtedly be remembered as one of the most dramatic endings to the KBO regular season in history. Not only did the Bears beat the Dinos without even threatening to take the lead until the very last hit, but they snatched the pennant from the claws of the Wyverns who dominated the KBO for the last six months. At one point, the Wyverns led the KBO by a seemingly unassailable 9 games.

In addition to the victory, the Bears’ foreign player Jose Fernandez won the KBO’s batting title as he finished the season with 197 hits.

The Bears will now progress straight to the Korean Series while the Wyverns will have to compete in the final playoff game. The Dinos also head to the postseason, playing the Wildcard game against the LG Twins on Thursday. The winner of that series will face the Kiwoom Heroes in the first playoff game.