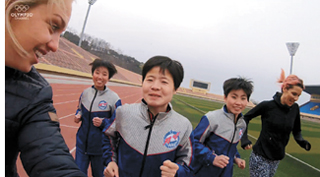 This past spring, she decided to throw herself into both when she entered an international marathon in Pyongyang. And the 28-year-old came away with renewed faith in the power of sport as “a tool at opening up the most isolated places” - even the country often referred to as the “Hermit Kingdom.”

“My takeaway moment is how sport really is a powerful language,” Fuller told Yonhap News Agency in a recent email interview. “It can be used as a tool to bring people together even in the most isolated and cut-off situations.”

Fuller, who competed at the 2014 Sochi and 2018 PyeongChang Winter Olympics, and a fellow Olympian, Swiss freestyle skier Mirjam Jaeger, were the principal narrators in a documentary titled “Running in North Korea,” produced by the Olympic Channel, the over-the-top internet television service operated by the International Olympic Committee (IOC).

The documentary, which premiered last month, follows the two athletes’ journey leading up to their appearance at the Mangyongdae Prize International Marathon in Pyongyang in April. They are taken to different places across the North Korean capital and chat with some of the country’s most decorated athletes, including Olympic weight lifting champion Om Yun-chol.

Fuller and Jaeger aren’t allowed to venture out on their own in the film, though they do spend one day training with North Korean marathon runners. Even when Fuller finally gets to hit Pyongyang streets for a solo run before the marathon, she’s followed by a car.

Fuller says she got “some really interesting looks” from pedestrians, but otherwise, it was “a special experience” for her.

Fuller said she was training for her first marathon, the London Marathon, in January when she was approached by the Olympic Channel. Fuller initially turned down an offer to do another marathon, but she changed her mind when she learned the race would be in North Korea.

“The only things I knew about North Korea come from my experience from competing in the Winter Olympics in South Korea [in 2018],” Fuller said. “I knew it was a couple of hours north [of PyeongChang] and I had heard and seen everything you see in the documentary, so it was important for me to go there and make my own decisions.”

Fuller said the North Korea she saw was “definitely a little more open than I had imagined.”

“I really did imagine it being very closed,” she added “However, due to the [North Korean] Olympic body [serving as the host], I believe we saw more than you normally would see. And that was really evident with how powerful sport can be in terms of a tool at opening up the most isolated places.”

According to the Olympic Channel, the trip was negotiated over six months and wasn’t subjected to review or approval by the North Korean Olympic committee or the local government.

While North Korea is known to go to great lengths to present its best self for visitors, Fuller said she saw plenty of “the real North Korea.”

“I believe that throughout the documentary, we managed to dig behind the scenes and showcase some of the real elements of the real North Korea in seeing how the athletes really do train,” she said. “I really believe that what we saw on the sporting side was real.”

Fuller said her next marathon will have to wait a while - “Running two back-to-back this year was enough for me!” - but a trip back to North Korea in the future isn’t out of the question.

“I would go back to North Korea, as I believe I could help them through the power of sport in showcasing snowboarding and how they could progress that sport in their country,” Fuller said.