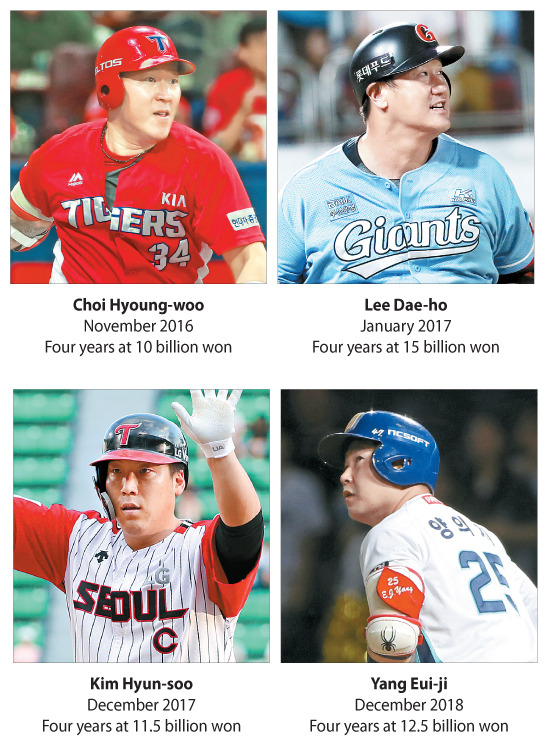 The 2019 KBO season might be over for the players and the fans, but for the 10 teams’ front office staff one of the busiest times of the year is only just beginning - the free agent market is about to open for business.

For the past three years, the KBO has seen at least one free agent land a 10 billion won ($8.6 million) contract, a record-breaking sum just a few seasons ago. But big contracts create big expectations, and some of those players were criticized by fans after failing to live up to the hype.

Back in 2016, the KBO broke the 10 billion won mark for the first time, when the Kia Tigers signed a four-year contract with Choi Hyoung-woo.

In Choi’s first season with the Tigers, the investment seemed to pay off. In 2017, Choi hit 26 home runs and 120 RBIs with a 0.342 batting average, helping the Tigers win both the regular season and the championship title.

Choi’s contract set a new standard in the KBO’s free agent market, but his record didn’t last very long as it was broken only a few months later. In January 2017, Lee Dae-ho made his return to the KBO and signed a record breaking four-year contract at 15 billion won with the Lotte Giants.

Lee, who started his career with the Giants and has an almost cult-like following from fans, was able to give the club a boost in 2017, helping it advance to the postseason for the first time in four seasons. Last year the Giants didn’t make it to the playoffs, but Lee performed well as captain and clean-up hitter, knocking in 37 home runs with 125 RBIs and a 0.333 batting average.

But things got dramatically worse this year. Lee ended the season with a 0.285 batting average and 16 home runs while the Giants ended in last place with 48 wins, three draws and 93 losses. In fact, 2019 will go down in the team’s history books as one of the worse years it has ever had.

Both Choi and Lee still have one more season remaining on their free agent contracts.

The LG Twins were the next team to break the 10 billion won mark, at the end of 2017 when they signed MLB returnee Kim Hyun-soo on a four-year contract for 11.5 billion won.

Kim also had a great first season back in the KBO, topping the league in batting average at 0.362. However, he was only able to play in 117 games throughout the 2018 season due to an injury. This season, Kim also struggled to live up to that paycheck, finishing his season with a 0.304 batting average and 11 home runs.

The KBO’s fourth 10 billion won free agent had a much better 2019, but this is only his first season with his new club.

Right after the 2018 season ended, the NC Dinos signed a big four-year contract with catcher Yang Eui-ji at 12.5 billion won. This contract allowed him to become the second-highest paid free agent in the KBO and the most expensive catcher in the league.

Yang proved a crucial addition to the Dinos’ roster this year as the team found itself with a bullpen full of inexperienced pitchers. The Dinos made it to the postseason, although they were the first to be eliminated, an impressive achievement considering they finished dead last in 2018.

In addition to the young pitchers, Yang also led the Dinos’ batting lineup. Na Sung-bum concluded his season early due to a knee injury, but Yang successfully filled Na’s spot as the Dinos’ cleanup hitter.

Throughout the 2019 season, Yang had a 0.354 batting average, good enough to win the batting title.

Along with Yang, the SK Wyverns’ Choi Jeong also signed a big six-year contract at 10.6 billion won after the 2018 season ended, but his 2019 wasn’t especially successful. Choi had a disappointing 0.292 batting average and only hit 29 home runs this season.

The KBO will announce the list of free agents today, but the 10 billion won threshold is likely to be passed this year. Expect a much quieter free agent market as most of the KBO’s biggest names remain under contract.