Lee Ki-sik, the Korean-born head coach of the U.S. national archery team, has been named the best Olympic instructor by the top American sports body. 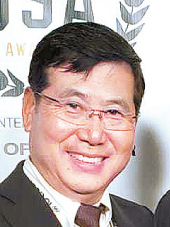 USA Archery announced that Lee was recognized as the Best Olympic Coach of the Year by the United States Olympic & Paralympic Committee (Usopc) on Tuesday.

Lee was among the winners of the 2019 Team USA Awards, which celebrate achievements by American athletes, coaches and teams in eight categories.

Lee became the first Korean native to receive the Best Olympic Coach of the Year award and also the first one from archery to be so honored since the award was first presented in 1996.

The U.S. archery team had finalists in four categories.

For the coaching category, the national sports governing bodies selected their nominees, and the winner was determined by a Usopc selection panel of coaching and sports performance professionals.

Lee led the U.S. program to a record-setting 2019 season, with the male archer Brady Ellison becoming the first American recurve archer to win the world title since 1985.

He also set a world record with 702 points out of a possible 720 points during the qualifying stage of the 2019 Pan American Games in Lima, Peru.

The awards were presented at a ceremony at Universal Studios in Los Angeles.

Before Lee started coaching the U.S. team, he led Team Korea to win eight Olympic gold medals from 1988 to 1996 and then coached Australian Simon Fairweather to the gold before home crowds at the 2000 Sydney Olympics.

Four years later at the 2004 Summer Olympics in Athens, Lee was the personal coach for bronze medalist Tim Cuddihy, another Australian.

Lee has been the U.S. national head coach since January 2006. At the 2012 London Olympics, the United States knocked off Korea in the semifinals en route to taking the silver medal in the men’s team event.

It was the only archery discipline in which Korea failed to win gold that year.

In 2016 Summer Olympics in Rio de Janeiro, Korea and the United States clashed in the men’s team final, with Lee’s native country prevailing that time.

In addition to winning a silver in the team event, Ellison also added another medal for Team USA by winning a bronze medal in the individual event.