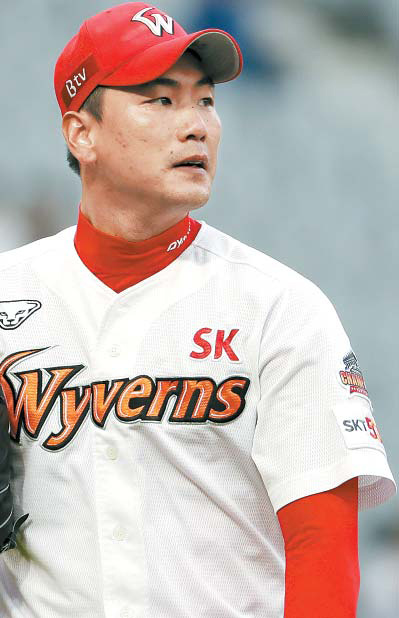 The SK Wyverns of the KBO announced their plan to post Kim on Friday, allowing the pitcher to explore the big league market even though he still had one year left in his current four-year deal.

He missed the entire 2017 season following Tommy John surgery, but if there had been any lingering doubts about his durability, the 31-year-old erased that by throwing 190 and one third innings this year, the second-highest mark of his career.

Kim pitched at least five innings in all 30 starts this year, and threw over 100 pitches in 10 of those starts.

And in the southpaw with strong KBO credentials, scouts see a potential major league starter.

Kim and Doosan Bears’ American right-hander Josh Lindblom were neck-and-neck in KBO’s major pitching categories in 2019. Lindblom had a 2.50 ERA while winning 20 games, and struck out 189 in 194 and two thirds innings to finish just ahead of Kim in these categories.

But one major league scout said he and other members of his brethren regard Kim as a better pitcher than Lindblom, and there will be “more than enough teams who will put Kim in their starting rotation.”

Another big league scout said Kim has a “filthy” slider and curve, and a four-seam fastball that, on the scout’s scale, gets a 55 in a big league scouting grade out of 80.

“He’d be a good mid- to back-end starter,” the scout said, on the condition of anonymity. “If he had a changeup, he would’ve gotten more love.”

Kim has always had swing-and-miss stuff in the KBO, and it remains to be seen if it will translate to MLB.

A third major league scout said he is a fan of Kim’s hard slider, saying he rates it better than the slider thrown by Washington Nationals’ All-Star left-hander Patrick Corbin.

“If Kim is willing to settle for a relief role, he’ll certainly get a big league job,” the scout added. “He could be a starter on a middling team.”

Kim himself said Friday that he’d like to negotiate with teams that will give him an opportunity to start, though he admitted he likely won’t have anything related to his role written in the contract.

Kim would like nothing more than to follow in the footsteps of fellow left-hander Ryu Hyun-jin, the first Korean player to jump from the KBO to the majors via posting.

Ryu, a year older than Kim at 32, dominated the KBO for seven seasons before being posted in the winter of 2012. He signed a six-year, $36 million deal with the Los Angeles Dodgers, and went 14-8 with a 3.00 ERA to finish fourth in the National League (NL) Rookie of the Year voting.

This year, Ryu finished second in the NL Cy Young Award race, becoming the first Asian pitcher to earn a first-place vote and the first Korean to even be nominated for the top pitching prize. Ryu led all of baseball with a 2.32 ERA.

Though their early years in the KBO overlapped, Kim and Ryu never faced each other in the Korean league. With Kim entering the market and Ryu also a free agent, the much-anticipated showdown could materialize in MLB.