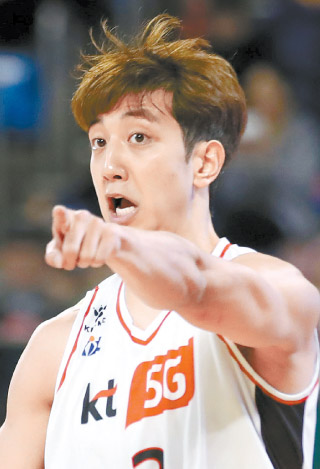 The KBL announced on Thursday that Heo won a total of 50,104 fan votes out of 114,187 possible votes. Behind Heo, Kim Si-rae of the Changwon LG Sakers finished second with 45,952 votes.

The third-year pro is having the best season of his career in the KBL, averaging 16.5 points per game, the highest average among domestic players, after the first 22 games. Including foreign players, his number is good enough to be ranked sixth.

Heo’s numbers get even more impressive in assists. He’s been averaging 7.36 assists per game, the best in comparison to both domestic and foreign players in the KBL. In three-point shots, Heo has been averaging 2.2 points per game, good enough to be ranked third.

Thanks to Heo’s performance, the Sonicboom marked a seven-game winning streak, but recently, it has been struggling and is currently in a four-game losing streak. During this time, Heo was absent as he injured his thigh ahead of the game against Anyang KGC on Dec. 17.

Sonicboom is ranked sixth at 13 wins and 13 losses with a 0.500 winning percentage.

“I didn’t expect to finish first in All-Star [voting], so I’m very happy,” Heo said. “I recovered from an injury just in time for the All-Star game. I’ll meet up to the fans’ expectations.”

By winning the fan vote, Heo also set a new record with his brother to become the first siblings to win the KBL All-Star fan votes. Heo’s brother, Heo Ung of the Wonju Dongbu Promy, won the All-Star fan vote for two straight seasons from 2015 to 2016.

“A while ago, my brother made fun of me by saying that I’ll never win the fan votes,” Heo said. “So I really wanted to win. I’m not sure if he’ll congratulate me. He might get mad instead. We don’t really compliment each other. We just do our own things.”

In addition to the brothers, their father, Hur Jae, the legendary basketball player, also competed in the KBL All-Star game five times, but he never got to win the fan votes. Although the KBL’s All-Star game first started in 1997, the fan vote was introduced in 2001, when Hur was heading to retirement.

“It would have been nice if all three of us won the fan votes,” Heo said. “[When the All-Star fan votes were introduced in 2001] my dad was looking at retirement. If it was introduced at the peak of his career, he would have won it for a number of years.”

The KBL’s All-Star game is scheduled to be played at Samsan World Gymnasium in Incheon on Jan. 19. Heo and Kim, who were the top two finishers in the fan votes, will be the captains of each team, and they will select the players for their team at the All-Star game. The head coach of the top ranked team in the regular season standing will be coaching Kim’s team while the head coach of the second ranked team will coach Heo’s team.

“Rather than hoping to win the All-Star MVP, my priority is to get my condition up,” Heo said. “I’ll play well at the All-Star game and meet up to the fans’ expectations.”

Until the All-Star game, the KBL will continue its regular season over the weekend. Heo’s team, the Sonicboom will play against the Goyang Orion Orions at Goyang Gymnasium at 3 p.m. today.