For Kim Dong-yub of the Samsung Lions, the 2020 season is all about making a comeback. 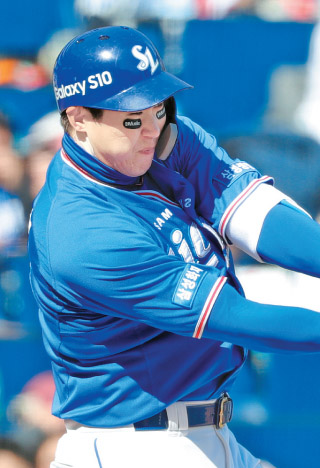 Kim Dong-yub of the Samsung Lions hopes to rebound in the 2020 season as the club’s slugger. [ILGAN SPORTS]

When the 2018 season ended with the SK Wyverns’ victory in the Korean Series, Kim had to leave the Wyverns in a trade to the Lions. With the Lions in need of a slugger, Kim’s trade came with high expectations that he could become the club’s clean-up hitter and strengthen the batting lineup.

Since Kim made his KBO debut with the Wyverns in 2016, he has hit a total of 55 home runs. In 2018, he hit his career-best 27 home runs while playing in 124 games. Although he wasn’t guaranteed a starting position with the Wyverns, he fulfilled his role as the team’s pinch hitter with his ability as a slugger.

Coming into the 2019 season, expectations for Kim were high. However, Kim’s performance was a disappointment for many Lions fans. He only played in 60 games and finished the season with a lackluster 0.215 batting average with six home runs and 25 RBIs.

It seemed as if he was finally making a comeback in June and July by reaching a monthly batting average of 0.375 and 0.329, but that didn’t last long. His batting average abruptly dropped to 0.143 for the month of August, and he was sent down to the futures league twice during the season.

Having went through the worst year of his career, Kim is hoping for a comeback this season. Under the Lions’ new manager Heo Sam-young, Kim is once again expected to be the Lions’ key player for the 2020 season. His role has become even more important than the previous year as the Lions decided not to re-sign their foreign slugger Darin Ruf.

The following are edited excerpts from a recent interview Kim did with Korea JoongAng Daily affiliate Ilgan Sports.

A. I’ve been training. After the season ended, I went to the Miyazaki training league in Japan and attended the Lions’ year-end training. After that, I took about a two-week break. Originally, I was going to start training right away, but when I did that last year, it didn’t turn out to be a good result, so I changed it up a little bit this time.

Is it hard to keep up with your training schedule during the offseason?

At first, I was going to take only a week off. I’ve done some weight training in between. My training style is that I get right back to training after taking a break for a day or two.

Have you made any changes so far?

At the Miyazaki training league, I tried out a leg kick swing while at bat. I was going to do it once the season ended, but since I got a chance to do it, I tried it out. I was hitting it pretty well. Kim Yong-dal, the Lions’ batting coach, also said it’s good to lift my leg up when I hit. [I tried the swing during the 2019 season] but I couldn’t do it properly. When I keep my leg still, I can hit it well when it’s good, but when I’m not in my best condition or tired, then it can led me to struggle severely, so I switched.

Do you feel any pressure ahead of the season?

I don’t feel that pressure anymore because I can’t get any worse.

What are some areas that the Lions’ new batting coach Kim Yong-dal is emphasizing?

He told me to set my hitting point a little forward when I hit. I tried to set it behind because setting it forward led me to trick myself to swing at breaking balls. But I made little changes in that. He said to put my [hitting point] forward to hit more home runs.

When you look back at the 2019 season, what do you think the problems were?

I worked hard because I felt the pressure that I had to play well and have good numbers. Even after I worked hard, if it wasn’t meant to be, then it just didn’t work out. Now, I’m trying to have a calmer mindset. There’s nowhere but up.

You will be wearing the same jersey number [38] as last year. Did you ever want to change it?

Since I played badly this year [2019], I tried to change it. But at the same time, I thought it wasn’t right to change the number because of one bad season so I decided to keep it.

You are probably the most disappointed in your 2019 season than any other season. How do you feel about your 2019?

What did you learn from your struggle?

When I wasn’t playing well for about 10 games, I had so much pressure that I felt like the season was over. In the beginning, when I didn’t even reach 100 at-bats, I got worried and started to get impatient about my struggle.

What are some areas that you are going to focus on during spring training?

I don’t really have that yet. It’s important to keep doing what I’m doing right now. Rather than focusing on a goal, it’s important to get through the training and continue the things I’ve been doing in training.