Han Song-yi gets second wind, vows to continue on court

Han Song-yi gets second wind, vows to continue on court

When Han Song-yi of Daejeon KGC first turned pro in 2002, she quickly made headlines for being one of the best outside hitters in the league. She was drafted first by the Korea Expressway Corporation Hi-pass and won the prestigious Rookie of the Year award. 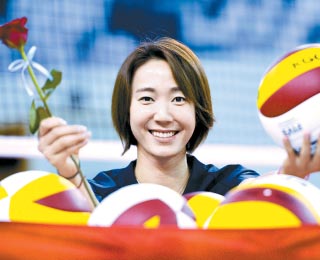 Having extended her career for a few more years, Han Song-yi of Daejeon KGC hopes to be recognized as a center. [KIM SUNG-TAE]

She continued her performance in 2005, when the Korean Volleyball Federation was established. The 2007-08 season was her best ever, and she won the league’s scoring title, with 692.

Her title was even more impressive as at the time, as Kim Yeon-koung, now considered as one of the best volleyball players in the world, and foreign players also competed in the league. But as with all players, Han’s performance suffered with age. She started to be passed over for the starting lineup, and once she was in her 30s, Han’s position was occupied by younger players.

Due to this, she had to be a multi-player: She sometimes appeared as a right-side hitter and sometimes as a center. Although she didn’t play badly in the new positions, she was never able to perform as well as she had as an outside hitter.

During the 2015-16 season, when she played for GS Caltex Seoul Kixx, before the matches, Lee Sun-koo, then the Caltex’s head coach, was often asked by reporters was, “Which position is Han Song-yi going to play today?”

“When I changed my position, it was really hard,” Han, now 35, said. “Since each position has different ways of swinging, it was hard to adjust to it,” she said. “In one match, I played as an outside hitter in the first set, center in the second and as a right-side hitter in the third set. I wasn’t good because I was just pretending. I even packed my stuff, thinking of quitting.”

While she was struggling to find her spot, it seemed as if her career was going to end soon when she got traded to KGC in 2017. Rather than her career ending, this turned out to be a life changer.

Han moved to center. Last month, she made her comeback by getting added onto the Korean women’s volleyball team, for the first time in five years, since the 2014 Incheon Asian Games. Not only is she joining the team, but Han also helped Team Korea earn its spot in the Tokyo Olympics.

As she was tall and started playing as center, Han finally got more chances to play. Despite playing in more matches, the people around her tended to discourage her by saying that she’s too old so she should either get married and have kids or help the younger players.

“I said I could play more, but I was thinking to myself at one point that it’s getting difficult now because I’m older,” Han said.

But once Han joined KGC, everything changed. Despite what other people said, she decided to stay strong and continue her season with her goals. For a new start, Han cut her long hair in May last year.

“I like to try new things, but I have a lot of fear,” Han said. “Due to this, when I was playing volleyball, I only thought about the times when I played well.

“So I couldn’t really change much. That’s why I decided to cut my hair, which I’ve grown for the past eight years,” she added. “Even at the hair salon, I was so nervous so they cut it little by little and ended up being right below my ears. I feel very free.”

It may have been the new hairstyle, but her playing style also changed last season. It’s become more direct and got stronger.

In Han’s first 15 matches, she’s scored 126 points and had 36 blocks. This is already a great improvement from the previous season, as she finished the 2018-19 season by scoring 123 points and picking up 19 blocks throughout 30 matches.

Her performance as a center also was good enough to catch the attention of the Korean women’s volleyball team’s head coach Stefano Lavarini. She joined the national team at the recent Olympic qualifier and substituted into the match during the group matches against Indonesia and against Iran.

In 2012 at the London Olympic Games, she was one of the starting players for Team Korea, but now, she’s more familiar on the court as a backup player. However, Han said she was just happy to be on the team again.

“I was just happy to get selected,” Han said. “I learned how to be an actual center on the national team.”

“I feel like I’m learning volleyball for the first time. It’s fun,” she said.

Although she will be turning 36 this year, Han decided to postpone her retirement and marriage for a couple of years. In 2017, Han made headlines for dating actor Jo Dong-hyuk.

“For now, I want to prove that Han Song-yi can be a center,” Han said. “If I retire without achieving that, then I think I’ll have a lot of regrets. I want to play for more years.”

Along with proving her ability as a center, Han is also working harder for a spot at the Olympics. As she was born in the Year of the Rat, she believes that she’ll see some good luck this year as 2020 is also the Year of the Rat.

“If I can compete at the Olympics, I believe this luck will help us to win an Olympic medal,” Han said.