Former Korean men’s football captain Ki Sung-yueng departed for Spain on Friday to finalize talks with a top-flight club there, looking to continue his pro career in Europe after negotiations with domestic teams fell through. 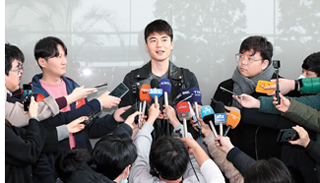 Ki Sung-yueng speaks to reporters at Incheon International Airport before departing for Spain to finalize his contract talks with a La Liga club.[YONHAP]

Afterward, Ki sought a return to the K League 1, where he began his club career in 2006 with FC Seoul. When Ki signed with Celtic in 2009 for his first foray into Europe, FC Seoul let Ki go on the condition that Ki must first negotiate with them if he wanted to return home. The two sides couldn’t come to an agreement, and Ki’s talks with another K League 1 team, Jeonbuk Hyundai Motors, also didn’t bear any fruit.

Ki, who spent three seasons in Scotland and then the next nine seasons in the Premier League, announced on Feb. 11 that he wasn’t coming back to the K League 1. He has since been linked to a second-tier Spanish club, SD Huesca, but speaking to reporters at Incheon International Airport on Friday, Ki said he was close to a deal with a first-division team in La Liga.

“There are about a dozen matches left until May, and I’ll try to play in as many of them as possible,” Ki said, declining to identify the club because he hadn’t yet signed the papers.

“I’ve been dreaming of playing in Spain since I was young,” Ki added. “I am probably more excited now than when I first joined the Premier League [in 2012 with Swansea City]. Taking on a new challenge always means something.”

Ki acknowledged that the kerfuffle surrounding his contract talks with the two Korean clubs had taken its mental toll on him, and he was looking forward to a fresh start in Spain.

“When I first returned home, I felt like I’d done enough in my career,” Ki said. “But when a new opportunity presented itself, I wanted to compete on the world’s greatest stage again. I am grateful for a chance to play in such a strong league.”

Ki said he wouldn’t mind signing a short-term contract, as long as he gets to take the field in La Liga.

“I think I’d be so happy just to play there,” Ki said. “I am obviously looking forward to a chance to go up against Lionel Messi [of FC Barcelona]. Just being in the same match as those players will prove valuable even after I retire, if I decide to stay in football.”