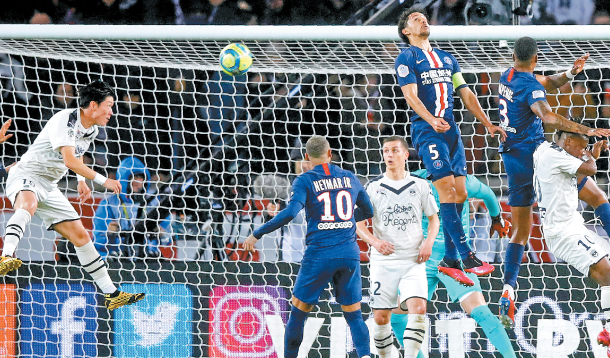 Hwang Ui-jo of Girondins Bordeaux, left, scores a goal during a Ligue 1 match against Paris Saint-Germain at the Parc des Princes in France on Sunday. [AP/YONHAP]

Hwang Ui-jo of Girondins de Bordeaux scored his sixth goal of the season on Sunday.

During Bordeaux’s Ligue 1 match against Paris Saint-Germain F.C. (PSG) at Parc des Princes in France, Bordeaux got off to an early lead with a header from Hwang in the 18th minute. It also marked his second consecutive league match to hit the back of the net with a header.

PSG quickly responded as Edinson Cavani scored the equalizer in the 25th minute, and in the second minute of stoppage time in the first half of the match, a goal from Marquinhos meant PSG took the lead.

But Bordeaux responded quickly and brought the score to 2-2 just four minutes later.

Marquinhos and Kylian Mbappe scored a goal apiece for PSG in the 63rd and 69th minutes, respectively. Although Bordeaux continued their fight by scoring their third goal of the match in the 83rd minute, by Ruben Pardo, it wasn’t enough for them to catch up to the Ligue 1 leaders.

The score at the final whistle was 4-3 to PSG.

With the loss, Bordeaux is now ranked 12th out of 20 teams in the Ligue 1 with nine wins, eight draws and nine losses, totaling 35 points, while PSG continued their dominant lead at 21 wins, two draws and three losses, totaling 65 points for the season.

Bordeaux will continue their season with another Ligue 1 match against OGC Nice at home, at Matmut Atlantique in France, on March 1, starting at 5 p.m., local time, or on March 2, starting at 1 a.m., Korea time.

Hwang started his football career in the K League 1 by joining Seongnam FC in the 2013 season. After playing five seasons for Seongnam, he expanded his career internationally by heading to the J1 League, signing a two-year contract with Gamba Osaka.

But it wasn’t until 2018 that Hwang’s name started to become familiar to football fans.

The addition of Hwang - who didn’t even qualify for the roster for the 2018 FIFA World Cup - on the Asian Games team was met with disdain, and both the striker and head coach Kim Hak-bum faced their fair share of criticism.

Just like the Olympics, the football tournament at the Asian Games is limited to players under the age of 23 and the team is allowed three wild cards - where they can include three players of any age.

At the time, the belief was that Kim added Hwang as a favor to help him get an exemption from his mandatory military service. Hwang did earn that exemption but not the way fans originally expected.

By leading Korea to a gold medal finish at the Asian Games, not only did Hwang earn the exemption, but he also became a regular pick for head coach Paulo Bento’s roster. Even with the senior team, Hwang’s goal streak continued, and that year, his performance allowed him to win the Korea Football Association Player of the Year award, beating strong candidates like Son Heung-min of Tottenham Hotspur and Ki Sung-yueng, the former captain of the Korean national football team.

Even at his Japanese club, Hwang was named the MVP of the season as he was the team’s top scorer. Then, his performance finally allowed him to head to Europe as he signed a four-year contract at 1.8 million euros ($1.9 million) per year, with Ligue 1 club Bordeaux on July 15, 2019.

Hwang scored his first goal for Bordeaux on Aug. 25, 2019, against Dijon FCO, and already, he’s scored six goals for the French club in his first season.