Since the Goyang Orions were established in 1996, they’ve won a total of four trophies in the Korean Basketball League (KBL). 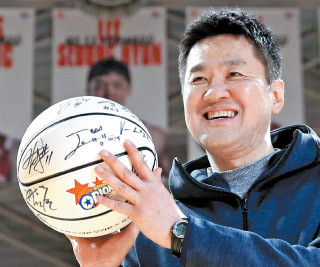 As the Orions¡¯ caretaker, Kim Byong-chul hopes to help his team get out of the bottom of the league standing in the Korean Basketball League. [KIM SANG-SEON]

All four trophies are displayed on the first floor of Goyang Gymnasium, the home of the Orions. Throughout the 25 years of Orions’ history, there’s only one person who has been with the club to lift all those trophies - caretaker Kim Byong-chul.

As the inaugural member of the Orions, Kim’s been playing for the club since 1997, when it first joined the KBL. Kim joined the Orions right after graduating from Korea University. During his time on the court, Kim helped the team to win both the regular season and the playoffs in 2002, and the following year the club once again won the regular season. When he retired in 2011, Kim’s jersey number, 10, also became a retired number.

But he wasn’t off the court for long. Kim made his return to the Orions as a coach, and in 2016 he helped the team win the playoffs.

The Orions were once a dominant team in the KBL, but looking at their performance this season, they’ve taken a tumble from grace. As of Thursday, they are ranked at the very bottom of the KBL regular season standing at 13 wins and 29 losses, with a 0.310 winning percentage.

Head coach Choo Il-seung chose to bear the brunt of the responsibility for the dismal performance and stepped down from his position on Feb. 19. That was when Kim became the caretaker.

“Head coach Choo apologized for leaving me such a burden,” Kim said. “But he told me that it was a spot I needed to fulfill one day and that if I can add my own color to the team, then they’ll play well. This will allow him to come out to the court and watch the games. I want to keep my promise to the head coach.”

Kim was undoubtedly one of Choo’s most-trusted coaching staff as he even allowed Kim to give the players pep talks about game management and strategy during timeout. Although Kim is not officially a head coach, he is finally at the helm of the club for the first time in 25 years.

“If I didn’t have any experience as a coach, then this would have been a lot harder,” Kim said.

While it took over two decades of loyalty to the club before Kim finally got his shot at the top job, it certainly wasn’t the first time he was offered a coaching job. Back when he was on the court, other teams approached him with offers.

“Actually, when I became an FA [free agent], in 2003, I got offers from other teams,” Kim said. “But I stayed as an honorary inaugural member. Now, this company feels like my family, and when I go to convenience stores, my hands reach out to Orion products first.”

Kim’s mention of getting offers from other team was not an exaggeration as the Orions had the best-5 men in the league during the 2001-02 season. Although Kim said it wasn’t all him who made the team the best at that time, he said he is still proud.

“It wasn’t because I was outstanding,” Kim said. “I’m confident that we were the best-ever. Other teams were scared to face us.”

Throughout Kim’s career in the KBL, he’s made more than 1,000 3-pointers, a feat which has inspired the clubs current players such as forward Heo Il-young.

“Not only the 3-pointers, but he has been helping me a lot with moving shots,” Heo said.

“When I was a player, I kept on changing my [shot] between moving shots, push shots and snap shots to increase the success rate of the 3-pointers,” Kim said. “Il-young has been scoring more 3-pointers and [Lee] Seung-hyun has been trying more 3-pointers than back when he was in college. And his timing got quicker.”

Kim taking the helm has added another layer of excitement to the KBL as his former competitors are also serving as head coaches for other teams. Lee Sang-min is the head coach of the Seoul Samsung Thunders while Moon Kyung-eun took the helm of the Seoul SK Knights, with Kim’s colleague Jeon Hee-chul as coach in his coaching staff. Kim’s other colleague, Hyun Joo-yub, is the head coach of the Changwon LG Sakers.

Kim made his debut on Wednesday, against the Ulsan Hyundai Mobis Phoebus, where the Orions defeated the Phoebus 68-64, but due to the coronavirus outbreak, fans were not able to watch as the KBL decided to play the remaining matches in the season at empty arenas.

The Orions now have 11 matches remaining in the 2019-20 season, and once they’re done, Kim is no longer expected to be the caretaker and officially be the Orions’ head coach.

“Rather than looking at the future, we’ll focus on the games right ahead of us,” Kim said. “We’ll have to play well in the remaining matches so we can continue our good vibe for the following season. We’ll play creative, fun and desperate basketball. We’ll need time, but I hope [the fans] set expectations.”