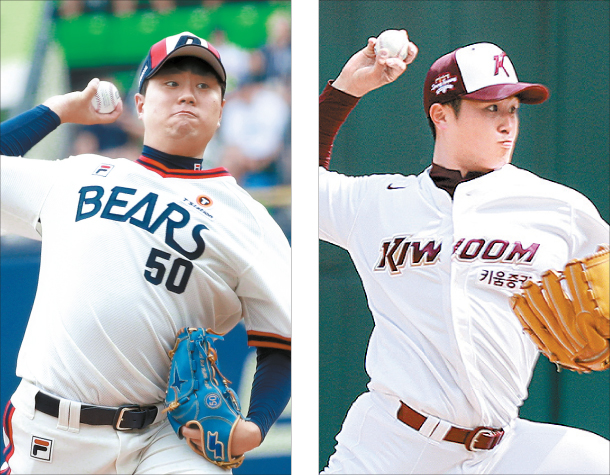 When the 2020 KBO season finally starts, the mound is set to see a new wave of young pitchers.

Since Ryu Hyun-jin of the Toronto Blue Jays, Kim Kwang-hyun of the St. Louis Cardinals and Yang Hyeon-jong of the Kia Tigers burst onto the KBO as absolute dominant Korean starters years ago, the local league has been struggling to find the next Ryu, Kim or Yang.

But once Ryu headed to the majors, his addition to the national team was no longer an option. Since Kim also left to the majors this season, and as Yang said he’s going to try to head to the majors after the 2020 season, the KBO is in desperate need of new, young pitchers.

And it seems like they’ve already seen some potential.

Last season, quite a number of young pitchers stood out on the mound. Of all, the Doosan Bears’ Lee Young-ha left quite the impression by picking up 17 wins, finishing second in league wins.

“Last year, I jokingly said my goal was to pick up 18 wins, and I ended up picking up 17,” Lee said. “[My goal is] the same this year. I’ll work harder on my control. It’s also important to play through the games and toward the end, when I start losing energy.”

Based on his performance at the Bears’ spring training, the 22-year-old seems to be on the right track for another great season as the fastest speed of his pitch reached 151 kilometers (93.8 miles) per hour during the Bears’ intrasquad game.

The Heroes’ Choi Won-tae is another young pitcher to look out for. At just 23 years old, Choi has already had a strong start to his career. In only his second season in 2017, he picked up 11 wins as the Heroes’ starter, and in 2018 he improved even more by picking up 13 wins. Last year, he once again picked up 11 wins.

Choi’s performance was good enough for him to get added to the Korean national team at the 2018 Asian Games and helped Korea to win gold. But Choi has weaknesses that he needs to overcome, including a pattern of ending the season early due to elbow pain.

The Heroes have supported Choi by not letting him start twice a week and focusing heavily on maintaining his physical condition. As a result, Choi managed to start in 27 games and played through the season. However, once the Heroes headed to the postseason, Choi seemed a little shaky.

To break this pattern, as soon as the season ended, Choi started getting to work and changing his pitching form throughout spring training. Such change allowed him to see some improvements in the speed of his pitches. During spring training, Choi’s fastest pitch hit a speed of 146 kilometers per hour. This is a significant improvement as his average speed for a fastball last season was at 142.7 kilometers per hour.

“I was also surprised by the speed of the pitch,” Choi said. “I think changing my form allowed my speed to increase.”

Koo had been receiving quite some attention from the Dinos as the next young starter to lead the club. He did manage to pick up 10 wins, but the 23-year-old wasn’t able to fulfill the regulated innings due to a number of minor injuries.

Although he managed to toss a total of 107 innings throughout 23 games last year, he wasn’t able to perform when the club or the national team needed him, as his injury led him to miss out on the Dinos’ wildcard game and a spot on Team Korea at the Premier 12.

“My goal is to be with the team from the season opener until the end,” Koo said. “I want to fulfill the regulated innings as a starting pitcher.”

Over in Suwon, Bae was not considered a starter, at least in the beginning of the season.

But once their starters missed games due to injuries, Bae was given a chance and used it to make a mark. By tossing a shut-out game in his last start of 2019 against the Lotte Giants, Bae managed to pick up his 10th win, and this season the Wiz’s manager said he considers Bae as one of three starters in the rotation.