Ha Jae-hoon won’t settle for anything but first

Ha Jae-hoon won’t settle for anything but first 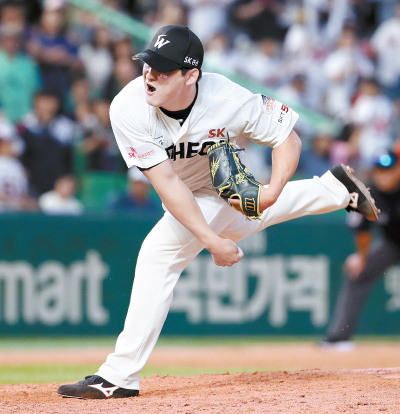 SK Wyverns closer Ha Jae-hoon throws a pitch during a game against the Doosan Bears in Incheon on June 23. [YONHAP]

Although nobody knows when the 2020 KBO regular season will start, the competition for the league’s saves is expected to be more competitive than ever when it finally does.

Last season, then 28-year-old Ha Jae-hoon of the SK Wyverns won the saves title with 36. His performance was beyond impressive as it was his rookie season. Ha’s KBO debut took longer than others as he started his pro career in the United States, right after high school, instead of joining the KBO.

To take the title, he beat competitors such as Go Woo-suk of the LG Twins, Won Jong-hyan of the NC Dinos, Jung Woo-ram of the Hanwha Eagles and Cho Sang-woo of the Kiwoom Heroes, among others.

In addition to the young closers, with the return of Samsung Lions’ closer Oh Seung-hwan, the fight for the saves title will be fiercer than ever.

Because Ha spent majority of his 20s playing overseas, this will only be his second season in the league. However, rather than thinking about what other closers are doing, he is once again ready to just focus on himself and give it his all on the mound this year.
Below are edited excerpts of Ha’s interview with Ilgan Sports.

Q. Last season, you started out as a bullpen pitcher and worked your way to the position of the Wyverns’ closer and won the league’s saves title. Following such a successful season, have you done anything differently to prepare for the 2020 season?

A. I always have the same mindset. Whether it’s last year, this year or the years ahead, my mindset will never change. I don’t feel like I can tell myself to just play better than last year, but that also doesn’t mean that I can stay the same. I just think hard work will pay off. I wasn’t slacking off, but I was slowly getting my pace up by increasing the intensity level of training, because last season, I felt like I had to something to prove. So I was physically ready before spring training. Due to this, I was somewhat disappointed that I wasn’t able to throw the pitches that I had thrown in spring training.

But you still managed to pick up 36 saves. Are you saying that you can play even better this year?

I’m talking about the speed of pitches back at spring training [in 2019]. Last year, once we started the exhibition games, I wasn’t seeing the same speed. This year, to prevent that and to show that power, I’m getting my pace up, slowly and intentionally.

With the return of the Lions’ Oh Seung-hwan, there has been a lot of talk about how competitive it will be to win the saves title. The KT Wiz’s closer Rhee Dae-eun, who is also known to be a close friend of yours, has said that he’ll beat you. How do you feel about that?

There are definitely a lot of great closers across all the KBO clubs this year. There were talks about Seung-hwan joining the title among closers, but Dae-eun mentioned my name first, while there are young closers like Go Woo-suk and Cho Sang-woo. But for now, I have a lot of work to do, and I don’t have enough time to train. I’m trying not to think about other people, and even after the season, I’m going to do the same.

When you were asked about your goal for this season, you said, “If I get a chance to be a closer next season, my goal is to beat every other closers’ goal.” Does that impressive goal still stand?

That may seem rude. But of course it’s valid. But it didn’t mean that I’m going to try to beat all the closers and be the best. I said that because the people who focus on the present also play well in the future. Rather than setting a goal, I thought being focused on the “present” would allow me to see better results than other pitchers. I didn’t mean to say, “I’ll beat everyone.” I meant to say that I’ll be trying my best in each game.

The KBO’s 2020 regular season has been suspended indefinitely. Are you having a hard time preparing for the season?

Yes, I am in a little bit of a panic mode. Luckily, I was getting my pace up slowly, but for starters [who have to increase the number of pitches], they are probably going to see some trouble in their plans. They’re supposed to be playing in practice games, but now that the season has been postponed they can’t.

Since they just keep on pitching and waiting, they may exhaust their arms. Also, since there’s the Olympics this season, it’ll be more pressure on those players who want to be added onto the national team roster.

Your name is also being mentioned as a strong candidate to be included on the Korean national baseball team. How do you feel?

Is that really true? If manager Kim Kyung-moon does select me, then I would be very thankful and participate.


This season, you said you want to pitch more innings and take the mound in successive games. What do you mean by this?

It means that if there’s a situation where I have to go out on the mound, then I won’t avoid it. Even if it’s not full two innings, I may be able to get out there in the eighth inning, while at two outs with runners on bases. In terms of successful games, it’s only possible if our team’s winning more games. Just like last season, if there’s a lot of opportunity for closers, where we’re winning a lot, then I want to be the one to fulfill that duty, instead of letting other pitchers do it so I can rest.

You’ve set a new record as the highest-paid second-year pro in the KBO. You’ve finally exceeded the league’s record set by Ryu Hyun-jin, now of the Toronto Blue Jays, back in 2006 when he played for the Hanwha Eagles. How do you feel?

It’s definitely a good thing to receive a high annual salary. I received my first new paycheck in February, and it was a lot more than last year. But it is embarrassing to hear that I’ve exceeded Ryu Hyun-jin, because the currency value is a lot different than it was 14 years ago. It’s a completely different generation. I don’t think we can just simply compare the 100 million won [$80,000] Hyun-jin received during that time to [my annual salary].

Throughout your career, you’ve experienced playing as a professional in Korea, the United States and Japan. Does the KBO’s style suit you?

Of course. Since each league has its pros and cons, I can’t choose which one is the best. Personally, I think allowing more freedom in training, where I can try this and that, suits me better.

You’ve joined the Wyverns as a pitcher, but until then, that wasn’t your position. Do you ever miss your time as a batter?

Of course I miss it sometimes. When you eat [a bowl of] rice, you want to eat kimchi. Being a batter is like the “kimchi” to my rice. It reminds me of that time. I miss it. But since I’m eating my “rice” as a pitcher, I have to hold myself back, even if I miss “kimchi.” Because I can’t live without eating carbs.