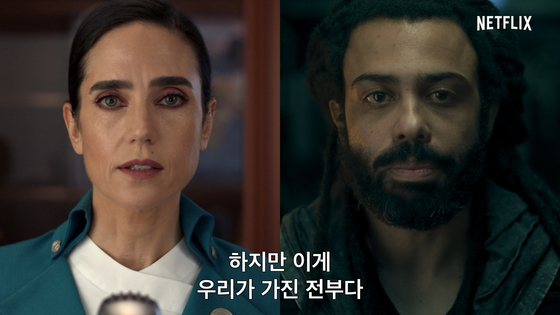 Netflix announced that the TNT drama series "Snowpiercer" will be streamed on the platform beginning on May 26. Above, a scene from the trailer featuring actors Jennifer Connelly and Daveed Diggs.


TNT drama series “Snowpiercer” is coming to Netflix for global audiences to enjoy on May 25, the global streaming platform announced on Monday.

With the announcement, Netflix released trailers and posters featuring actors Jennifer Connelly and Daveed Diggs, who each take turns explaining life on the Snowpiercer train, which is carrying 3,000 survivors who have lived on the train for seven years after the Earth has frozen over.

The series, consisting of 10 episodes, is a reboot of the 2013 dystopian film from director Bong Joon-ho and will cover issues of class warfare, social hierarchy and survival on the train in more detail than the movie.

Directors Bong Joon-ho and Park Chan-wook are reported to have participated in the television series as executive producers.