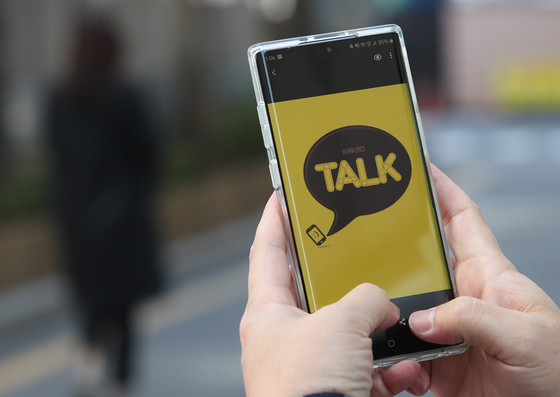 The Kakao messenger app. The company in March celebrated its 10th anniversary. [YONHAP]


Shares of "untact" companies, those in businesses that do not involve contact between humans, are booming as other companies struggle with factory closings and customers stuck at home. IT and game companies are doing especially well.

The moves have been so dramatic that untact companies are overtaking major traditional industry companies in market capitalization rankings.

Last Wednesday, Kakao hit the No. 10 spot for the first time ever in terms of market capitalization. On Thursday, it was ranked No. 9, ahead of Hyundai Motor. By Monday, Kakao was back at the No.11 spot, behind the carmaker, but it's still far ahead of its 20th place spot last year.

Naver has done well too, with the shares up 15 percent from the beginning of the year. It currently ranks at 4th by market capitalization.

“Untact has become common and part of daily life,” said Park So-yeon, a Korea Investment & Securities analyst. “Through IT technologies and network platforms, consumers are experiencing a new type of activity,” the analyst said, citing Korean baseball games broadcast in the United States.

“It shows that people could enjoy normal life while maintaining social distancing,” Park added, noting that people are no longer feeling the urge to return back to the past and that living and consumption patterns are changing with the pandemic. “While this is a blessing for untact-related shares, it is a major burden for old industries. Restructuring is inevitable,” Park said.

Even among the traditional manufactures, some experts project that rising untact businesses will help companies like Samsung Electronics, the leading manufacturer of semiconductors.

“The second-quarter performance will likely be slower than that of the first quarter,” said Lee Seung-woo, an analyst at Eugene Investment & Securities. “However, as we enter into the untact era, it will be relatively a good opportunity for Samsung Electronics.”

Lee said not only will its business in semiconductors improve, but the untact lifestyle will also contribute to an improvement in other Samsung businesses, including displays, TVs and mobile devices.