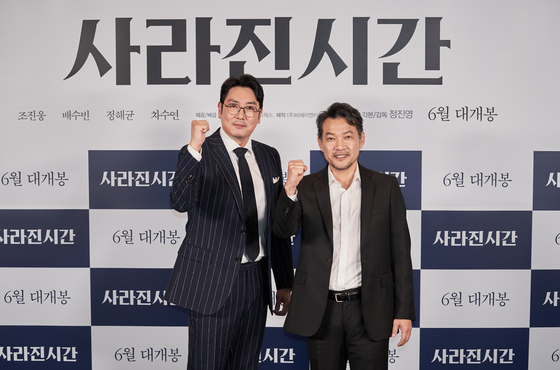 Actor Cho Jin-woong and actor-turned-director Jung Jin-young pose for photos during an online press event for their upcoming film "Me and Me" on Thursday. The film is scheduled to premiere on June 18. [ACEMAKER MOVIEWORKS]


Do you have a childhood dream that you smile back on wistfully, but never really had the courage to pursue? Actor-turned-director Jung Jin-young is on the brink of achieving his lifelong dream of becoming a film director through the upcoming mystery drama “Me and Me.”

“I actually wanted to become a filmmaker when I was 17,” Jung said during an online press event held Thursday. “But as I entered college, I turned to acting and was daunted by the amount of work and experience required in the filmmaking business. I thought I didn’t have in me what it takes to become a director.”

However, the veteran actor decided to muster up the courage after being in the film business for over three decades.

“The only thing that was holding me back was my fear of how others might think of me or judge me [through the film],” Jung said. “I decided not to let that hold me back anymore. I wrote the script four years ago, and I think the film’s message is something that I’ve thought about for a long time. The message may be too grand and abstract, but I wanted to ask the audience what it means to be myself in this world. And I wanted people to become deeply immersed in following the film’s narrative so that they aren’t thinking about anything else.”

The film centers around a police detective named Hyung-gu (played by actor Cho Jin-woong) who encounters a mysterious fire incident. While trying to decipher whether or not the case is an arson crime or an accident, Hyung-gu wakes up one day where everything he’d known had been upended: he is no longer a police detective, but a school teacher, and no one seems to believe otherwise.

“At first, I couldn’t believe that Jung had written the story,” Cho said. “As I read the script, and even throughout filming, I was constantly amazed by this ingenious narrative. It is truly a remarkable story that hasn’t been seen throughout local commercial films.”

“Whenever I was offered a part in a film and the directors would say to me, ‘I had envisioned the character with you in my mind’ I thought that was just a bluff to lure me in,’ Jung said, chuckling. “But that was really true. As I was writing the script, Cho naturally became the face of Hyung-gu. So I consider myself extremely lucky to be working with my first choice of lead.”

Cho also talked about working with Jung the director for the first time.

“Although our positions have been changed, how Jung confronts his films as an artist has not,” Cho said. “I believe that the essence of how an actor and director view the film is the same, although the latter might be the decision maker at the end. And like other actor-turned-directors, Jung wholeheartedly comprehends the actors’ side in the production, and he was always considerate of us.”

The film will be released in theaters on June 18.