At least 14 schools in Daejeon shut down Tuesday after two students were diagnosed with the coronavirus, raising alarms in a city grappling with a growing cluster of infections traced to several door-to-door sales businesses.

No links have been established between the four cases and the string of infections traced to the door-to-door sales businesses.

The brothers received their positive test results Monday, and both their elementary and middle schools closed the next day. Their classmates and teachers were tested for Covid-19 and told to self-quarantine for the next two weeks. Both schools plan to hold online classes until Friday.

Four private educational institutes attended by the two boys also closed, along with 12 other schools — six elementary schools, five middle schools and a high school — whose students attended the four institutes. The schools are all located in either Dong District or Jung District of Daejeon, 89 miles south of Seoul.

Daejeon’s metropolitan government office effectively banned the operation of 91 private education institutes and 16 gyms in three neighborhoods of Dong District Tuesday, prohibiting people from gathering in those establishments until Sunday.

Local officials said the ban could expand to other businesses and be extended, depending on whether new infections continue to rise.

Daejeon Mayor Her Tae-jeong pleaded with parents not to send their children to private institutes until Sunday, saying it was pertinent to curb the outbreak within the "golden time." 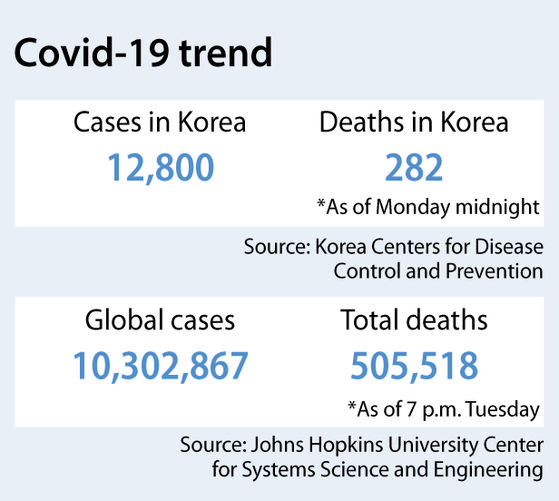 Across the country, 43 new Covid-19 cases were detected Monday, 20 of which were imported cases, according to data from the Korea Centers for Disease Control and Prevention (KCDC) released Tuesday morning.

Among local infections, seven were in Gyeonggi, six in Seoul, five in Daejeon, three in Gwangju and one each in Gangwon and North Chungcheong.

Among imported cases, 10 were from Kazakhstan, two from Pakistan and one each from Kuwait and Afghanistan. Another three were from the Americas, two were from Africa and one was from Europe.

Across the nation, 44 schools remained closed as of Tuesday at 10 a.m., the Education Ministry said, accounting for about 0.2 percent of the country’s total of 20,902 kindergartens, elementary, middle and high schools. The number of closed schools rose for the fourth consecutive day as several clusters continued to grow.

In a cabinet meeting at the Central Government Complex in Seoul, Prime Minister Chung Sye-kyun told government officials to brace themselves for the summer holidays, warning that swarms of people are expected to flock to popular tourist attractions and raise the odds of virus transmissions.