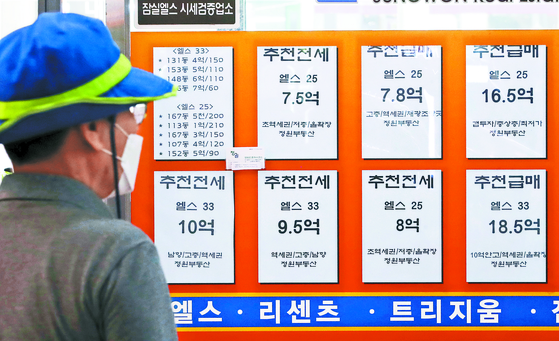 Jeonse prices are on the rise, following increased demand for the long-term rental agreements in which a tenant pays a large up-front deposit that they receive back at the end of the lease term.


New government regulations limiting the ability of people to borrow money for mortgages has contributed to the trend, along with the coronavirus pandemic's impact on the local real estate market.

The Bank of Korea’s decision to cut the key interest rate to an all-time low of 0.5 percent has further reduced jeonse supply, as landlords stand to earn more by shifting to monthly rent.

In jeonse contracts, the landlords typically profit from the interest by putting the large deposit in the bank.

Yoon, a 42-year-old woman with a jeonse contract ending soon, recently decided to extend the lease agreement rather than buying her own place in Gangnam District, southern Seoul.

“Housing prices went up sharply in the last two years, but it’s hard to predict whether apartment prices will be going up or down,” Yoon said. “I’ve decided to watch the market for another year [before making a final decision].”


Jeonse prices have been rising for 10 consecutive months since September, according to the Korea Appraisal Board. In Seoul, those prices on average rose 10 million won ($8,300) in just the past five months.

Last month, the average jeonse price in Seoul was 486.6 million won, according to KB Kookmin Bank’s real estate department, a 2.5 percent increase from the end of 2019.

There’s a major shortage of jeonse apartments in the popular Gangnam area, which refers to three districts south of the Han River — Gangnam, Seocho and Songpa.


According to the Land Ministry, a jeonse contract of 1.25 billion won was signed for an 84-square-meter Richensia apartment last month — the highest amount recorded since the apartment complex was built in 2008.

Another apartment of the same size, in the same complex, garnered a 1.05 billion won jeonse contract just three months ago.

A realtor operating near Richensia said that landlords are offering jeonse contracts for the 84-square-meter apartments in the neighborhood for 1.1 billion won, a significant increase from 900 million won at the beginning of the year.

Many real estate market experts say that jeonse prices in Seoul are likely to rise higher in the second half of 2020.

“Apartments in Seoul are still expensive, and as the economic situation remains uncertain, renters are remaining in the rent market, just biding time,” said Ham Young-jin, head of the big data lab at Zigbang, a leading real estate app developer. “The problem is while demand for jeonse is increasing, the number of landlords preferring monthly rent due to the low interest rate is growing, which is inevitably driving up jeonse prices.”

However, Park Won-kap, a real estate expert at KB Kookmin Bank, said he believes jeonse prices won’t surge as much as other analysts suggest.

“This year, 42,000 apartment units will be created in Seoul, which is at minimum 30 percent more than the average in the city during the last 10 years,” Park said. “Since there’s no shortage of supply, jeonse prices won’t rise sharply.”

The government is said to be looking into the possibility of setting a maximum limit on jeonse prices and monthly rents, as well as strengthening the tenants’ rights to demand extensions to their jeonse contracts.

“The recent government moves in regulating rents won’t have an immediate impact on the jeonse market,” said Song In-ho, senior researcher at Korea Development Institute. “However, in the past, Seoul jeonse prices shot up when the government extended the jeonse contract years. If the government regulates, it could trigger further price increases in the market.”