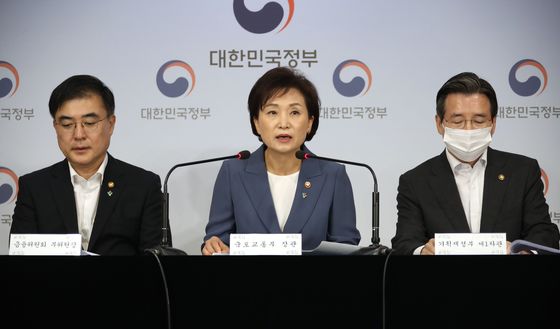 The government continues its war on real estate prices.


The latest measures:
— Anyone who used a jeonse (long-term housing rental deposit) loan to buy an apartment worth 300 million won ($250,000) or more in areas designated as "overheated" or "speculative" zones will have to immediately repay the loan.
In January, the government effectively prohibited the use of jeonse loans for apartments worth 900 million won or more in designated areas including all districts in Seoul.

— The capital gains tax for real estate companies who rent residences will be doubled to 20 percent starting January 2021.

— Starting next month, anyone who purchases an apartment financed by a mortgage in overheated or speculative zones regardless of the value will have to move into the property within six months.

Previously the grace period was one year in overheated and speculative areas and two years for less restricted areas. The requirement only applied to apartments with values over 900 million won.

Even residence buyers with mortgages from the state-owned Korea Housing-Finance will have to move in within three years and be required to live in the apartment for at least a year.

These were the main real estate regulations announced on Wednesday, the 21st round of measures aimed a cooling down the property market, a signature goal of the Moon Jae-in administration.

Jeonse is a uniquely Korean real estate custom in which tenants pay very large deposits on residences while saving up to buy their own. Landlords live on interest from the deposits.

Jeonse loans are easier to get than mortgages, so some homebuyers are using them to buy property using so-called "gap investment."

In recent years, gap investment has caught on as a way around government restrictions.

This practice allows investors to purchase apartments with little cash.

But it has a huge risk if property prices go down — and whenever the landlord has to repay the jeonse deposit.

“Gap investments account for roughly 72 percent [of apartment purchases] in the Gangnam areas in Seoul,” Kim said. “That’s a 15 percentage-points increase compared to the beginning of the year.”

She also raised concerns about a growing number of real estate transactions made by real estate companies rather than individuals, which face fewer restrictions by the government in terms of loans and taxes.

“Among recent apartment purchases nationwide, those by businesses now account for 6.6 percent, up from 1 percent in 2017,” she said. “This phenomenon seems to be trying to manipulate [regulations] on loans and taxes.”

Companies in the real estate rental business are exempted when the combined value is under 600 million won. Some landowners put some properties under their own names and others under the corporate names to avoid the tax. That won't be allowed starting next year.


Additionally, real estate rental businesses are exempted from the comprehensive real estate tax if they rented units for more than eight years, and for apartments with values under 600 million won in the greater Seoul area and under 300 million won elsewhere.

For these reasons, many individuals have incorporated themselves as rental businesses.

“Recently there have been unusual changes detected in the housing market,” Kim said Wednesday. “Seoul, the metropolitan area, and several provincial areas have been showing signs of overheating as capital re-enters the housing market thanks to all-time low interest rates.

“This hurts low- and middle-income households searching for apartments they can actually live in,” Kim continued. “The government will continue to work on expanding opportunities for these people to buy houses they can live in.”

Other measures announced Wednesday include a new requirement for homebuyers in designated areas to report to the government how the purchase was financed regardless of the value of the property.

Previously this requirement was imposed on purchases of residences whose value exceeded 900 million won.

The government also designated 17 new areas that will have stricter rules on loans.

The areas include Dongtan, which has been a hot real estate market, Giheung and Suwon, all in Gyeonggi.

Also included were three districts in Incheon and three in Daejeon.

A total of 117 areas have now been designated as speculative or price-adjusted areas.

The government said that since its last measures were announced in December, housing prices have stabilized.

But last week, Seoul housing prices went up for the first time in 10 weeks, inching up 0.02 percent compared to the previous week.

Prices rose where major redevelopment projects were announced, including the Jamsil Sports Complex.

Some Gyeonggi neighborhoods not restricted by the government saw rises since December.

Some believe the latest government’s measures could limit opportunities for people in lower- and middle-income households to buy property.

“It will be difficult for low- or middle-income households," said Kim Gyu-jeong, a real estate analyst at NH Investment & Securities.

Many of those households need gap investments to become property owners.

With the latest measures, only people with cash on hand will be able to purchase.

At the beginning of the year, Moon promised to curb the real estate market.

“[We] will never lose in the war against real estate speculation,” Moon said.