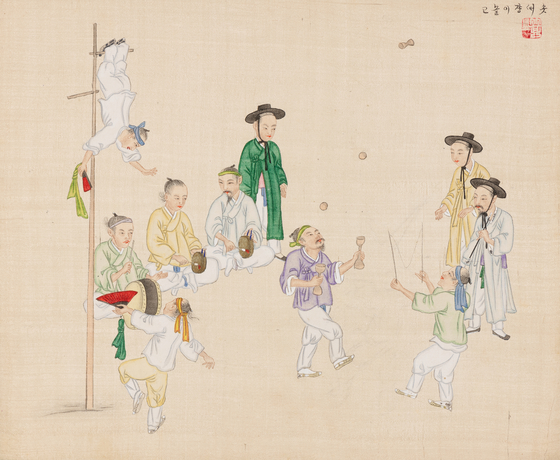 "A Pole Acrobat Performing" by genre painter Kim Jun-geun, who had sold nearly 1,500 works depicting everyday lives of Koreans in the 19th century, showcased at the special exhibition in National Folk Museum of Korea in central Seoul through October. [Museum at the Rothenbaum — Cultures and Arts of the World]

An exhibition of Kim Jun-geun’s genre paintings is underway

When the ports of the Joseon Dynasty (1392-1910) opened to the rest of the world in the late 19th century, travelers, diplomats, missionaries and merchants flooded in, all curious to find out more about the life of the people in the formerly unknown land in Asia.

Some came and left in a few days while others stayed for years, but by the time of their departure, they all wanted a memento of sorts from this foreign land to be able to show their families and friends back home while regaling them with their adventures in Korea.

Word must have gotten around that not too far from the ports of Busan and Wonsan was a painter by the name of Kim Jun-geun, who could depict the everyday lives of Koreans, from their wedding processions to the way the elderly men played backgammon by the bustling marketplaces.

“And so Kim’s works, numbering nearly 1,500 made their way around the world, to Germany, France, the United Kingdom, Denmark, the Netherlands, Austria, Russia and the United States,” said Lee Kyung-hyo, a researcher at the National Folk Museum of Korea in central Seoul, in a press conference hosted at the museum on May 19.

"Finding Folklore in Gisan's Genre Paintings" exhibition at Natinal Folk Museum of Korea showcasing works of Kim Jun-geun, whose pen name was Gisan. Among those showcased, 71 original works of Gisan were provided by Germany's Museum at the Rothenbaum — Cultures and Arts of the World. [NATIONAL FOLK MUSEUM OF KOREA]

The museum opened the special exhibition with cooperation from Germany’s Museum at the Rothenbaum — Cultures and Arts of the World, also known as Markk, which is one of the largest museums on ethnology in Europe. Markk shipped over 71 originals of Kim’s works to Korea for the exhibition, a majority of which were collected by Heinrich Constantin Eduard Meyer, a German merchant who founded a trading company in Incheon in the 19th century.

The exhibition, open through October, is showcased on the first floor of the museum. The museum is accessible via a separate entrance behind the Gyeongbok Palace grounds and the exhibition is free.

Visual records of how Koreans worked and played
What sets Kim’s works apart from well-known genre painters of the time, like Shin Yun-bok or Kim Hong-do, are the details of the everyday activities of Koreans, which draw the viewers in and shows how things were done back then.

“One of Kim’s paintings shows all the procedures about kiln work on one canvas,” Lee said, pointing to Kim’s work, “Onggi (Earthenware) Kiln,” estimated to have been painted in the 1890s and provided by Markk for the exhibition.

“You see several men positioned around a kiln, each showing one part of the process of shaping, baking and selling earthenware products at the time,” Lee said. “It seems that customers who asked Kim for these paintings wanted the whole process painted into one scene. So we see a lot of similar examples in Kim’s other works.” 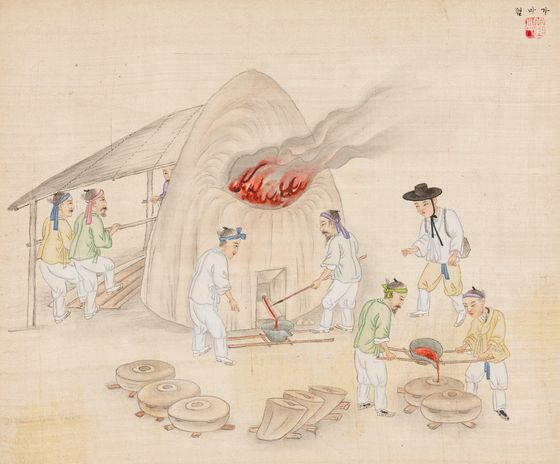 A blacksmith workshop in Korea in the 19th century, depicted by Kim. [Museum at the Rothenbaum — Cultures and Arts of the World]


The exhibition is divided into two sections. The first shows Kim’s works, depicting how Koreans worked — men in fields with plough-ready oxen, women working with spinning wheels, woodsmen crafting goods and potters baking their dishes — and how Koreans played – men playing jonggyeongdo (a type of board game) or women clad in hanbok on swings.

The first section also showcases detailed wedding processions from the perspectives of the bride’s family and the groom’s family, which show the stark difference in expectations for men and women at the time, something that must have stood out to the eyes of foreigners.

The second section showcases some of Kim’s paintings as well as the actual objects depicted in them, collected by the folk museum in Korea.

Kim’s paintings also provide a glimpse into the East meeting the West.

“Take a close look at this one,’” Lee said, pointing to Kim’s “Marketplace” dated to 1890s. “You can see men wearing gat, the traditional hat of Korea, but also some wearing bowler hats, clearly a Western influence.” 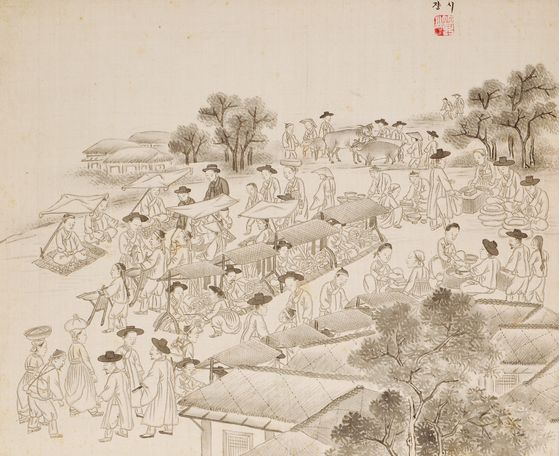 "Marketplace" by Kim. [Museum at the Rothenbaum — Cultures and Arts of the World]

The man behind the paintings
Even though Kim had produced at least 1,496 genre paintings of Korea, his name is not familiar to many Koreans.

“A majority of Kim’s works are abroad, with only 298 in museums in Korea,” Lee said. “As the numbers show, Kim was an artist who made a name for himself among foreigners more than among Koreans. And that’s still the case today.”

Korea has no records on Kim, not even when and where he was born. All that is recorded about him is that he was an illustrator for the first Korean translation of “The Pilgrim’s Progress” by John Bunyan in 1895.

It is unclear if the artist himself knew how far his works traveled.

“Unbeknownst to Kim himself, he accomplished the considerable feat of making Korean genre painting widely known around the world,” wrote Shin Seon-young of the Cultural Heritage Administration on its website. 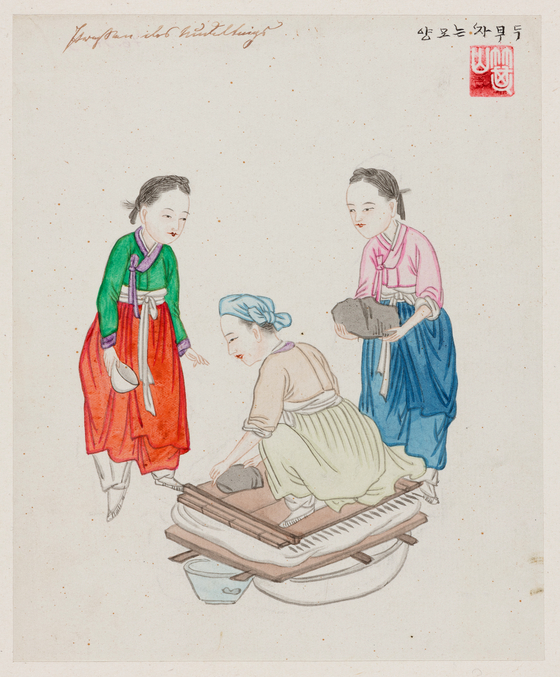 "Women Pressing Bean Curd" by Kim, dating back to the 1880s. [Museum at the Rothenbaum — Cultures and Arts of the World] 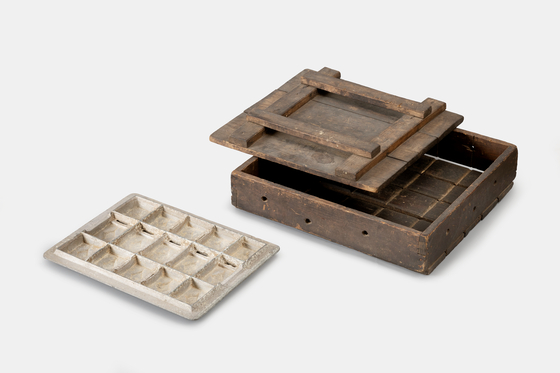 An example of tofu-maker used in Korea in the 19th century, as depicted in Kim's paintings. [NATIONAL FOLK MUSEUM OF KOREA]