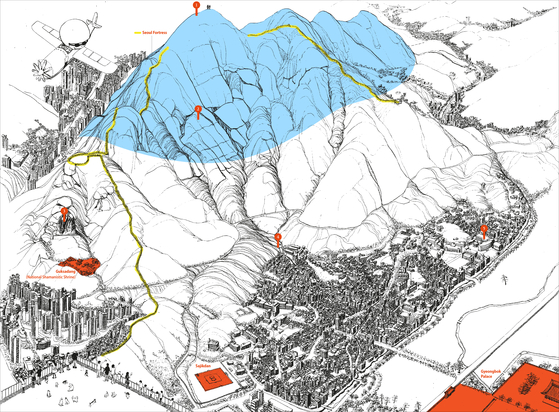 
Korea is a mountainous country. About 60 percent of the peninsula is covered in forests leading to many hiking enthusiasts in the nation. In its capital city Seoul alone, which has relatively fewer mountains compared to more rural areas, there are 116 officially registered mountains. Among them, climbing is prohibited from six for a variety of reasons.

Each mountain has its own wonders but there is one that has recently gripped the attention of both media and the public.

This article attempts to take a fresh look at the popular mountain through a detailed pen drawing of Mount Inwang by An Chung-ki, an artist and an editor at the JoongAng Ilbo, an affiliate of the Korea JoongAng Daily.

Mount Inwang in central Seoul has been making headlines since late last month as Korea’s landscape masterpiece “Inwangjesaekdo” (Scene of Mount Inwang After Rain) was included in the extensive and impressive art collection donated to national museums by the family of late Samsung Group Chairman Lee Kun-hee (1942-2020).

“Inwangjesaekdo” (1751) is a landscape painting by a renowned Joseon (1392-1910) painter Jeong Seon (1676-1759). Jeong Seon painted many landscape paintings of Mount Inwang but according to art historians, this is by far one of his greatest works. It is Korea’s National Treasure No. 216. 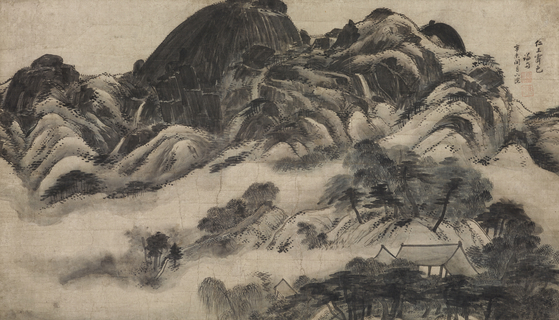 
What makes it so special, even with the tip of the peak missing?

Mount Inwang, with a height of 338 meters (108.92 feet), is known as one of the easiest mountains to climb in Seoul. It is not as grand as the famous Mount Geumgang, which was the most popular mountain for landscape painters of the Joseon Dynasty. But Jeong Seon, who lived at the foot of Mount Inwang, witnessed its beauty on a daily basis.

What distinguishes Mount Inwang from others is that it’s a rocky mountain, full of large and small granite rocks in different shapes. What’s more interesting is that each rock is named after its shape, such as a Tiger Rock, Skirt Rock, Train Rock and Worm Rock, among many others. Because of this, the mountain is famous for its view from afar rather than for climbing. Living so close, Jeong Seon must have enjoyed the beautiful scenery the mountain offered not only across the four seasons but also during sunset or after rain.

Amazed by the wet fog thickening in the valley of the rocky mountain after a week of rain in the month of July, Jeong Seon, as a landscape painter, wouldn’t have missed the chance to capture such moments. He would’ve ran right home to grab his paintbrush, ink and hanji, or Korean traditional paper.

It is said that Jeong Seon painted “Inwangjesaekdo” for his poet friend Lee Byeong-yeon (1671-1751), who was sick in bed due to old age. Lee was also one of the most renowned poets of the Joseon Dynasty. After witnessing the amazing view of Mount Inwang, Jeong Seon thought of painting the landscape and dedicating it to his friend of sixty years. There are claims that Lee died a couple of days after receiving the painting while others say that Jeong Seon painted the "Inwangjesaekdo" many months after Lee's death.

It was Jeong Seon who started the trend of real-view landscape paintings depicting Korea’s mountains and rivers of the Joseon Dynasty, known as silgyeong sansuhwa in Korean. Joseon painters of the time usually copied landscape paintings from Chinese art books to learn painting techniques.

Regarding the cropped peak on Jeong Seon’s “Inwangjesaekdo,” it is said that the painter accidentally cropped it while affixing the painting.

There are several different stories about where Jeong Seon painted “Inwangjesaekdo.” It remains an ongoing debate among Jeong Seon’s fans and even today, people visit the mountain with a copy of the painting in their hands, trying to locate exactly where it was painted.

There appears to be two obvious options, one being Jeong Seon’s residence at the foot of the mountain, where he had lived until he was 51 before passing it on to his son, and the other being Suseongdong Valley. (Jeong Seon moved not too far from his son’s house in today’s Okin-dong and lived there until he passed away at age 83.)

Jeong Seon’s first home was located where Kyungbok High School now stands. While some believe that he painted “Inwangjesaekdo” there, including the school staff members, more people lean toward the Suseongdong Valley option.

Choi Cheol-ho, head of the Seoul Fortress History & Culture Research Center said that Suseongdong Valley was not only Jeong Seon’s favorite spot to paint and relax but also a popular attraction for Joseon scholars, poets and painters. In fact, Jeong Seon also painted a landscape painting of the valley, which is included in the “Executed Album of Paintings of the Eight Views in Jangdong.” 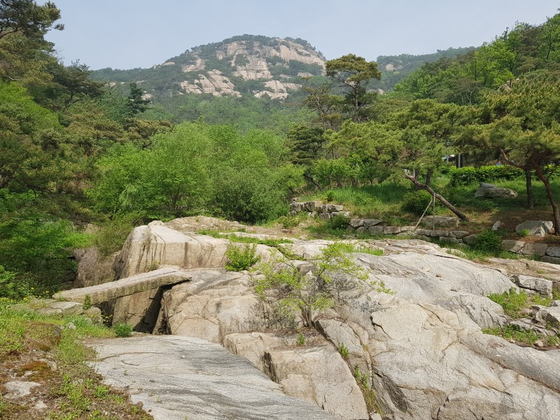 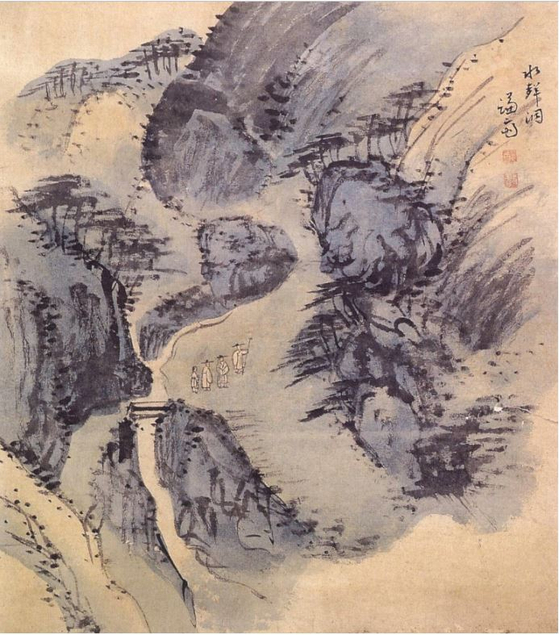 
However, in 1971, nine apartment buildings called Okin Sibeom Apartment Complex was established to cater to the surging population in Seoul. In 2012, when the apartment had to be demolished for safety, the Seoul Metropolitan Government decided to recognize the site's historical value and restored Suseongdong Valley. During this process, Jeong Seon’s landscape painting of the valley was used as a model, focusing on restoring the geographical features of rocks to mirror those in the painting.

Choi recommends visiting the mountain and the valley when it’s raining to really understand Jeong Seon’s emotions when he painted “Inwangjesaekdo.”

“The National Museum of Korea will be exhibiting the painting in June, so it will be great to go to the museum and see the painting first and then visit the mountain and the valley during the rainy season,” he said. “It will bring calm to your heart.”

It’s not only Jeong Seon who made the mountain famous.

Mount Inwang is also one of the most frequently visited mountains for Korean shamans, known as mudang.

“Mount Inwang is a sacred site for shamans,” she said. “They have shrines all over the mountain but many visit the rock formation at the top to pray.”

In the Annals of the Joseon Dynasty, it states that tigers often appeared in Seoul. Especially during Emperor Gojong’s reign (r.1863-1907), it says that tigers, most of which were from Mount Inwang, even penetrated Gyeongbok Palace, frightening the people.

Mount Inwang tigers were feared but also revered, to the extent that some people believed that serving these powerful creatures would help people ward off evil spirits. That is why tiger paintings became popular among people in the late Joseon Dynasty, as people wanted to hang them on the walls of their homes and in temples to keep evil spirits away. That is why there is a large stone statue of a tiger erected at the entrance of the mountain trail.

Among the many rocks on the mountain, the most “sacred” is Seonbawi, also known as the Standing Rock in English. It is located just above the National Shamanistic Shrine known as Guksadang and for many decades, it’s been worshiped by not only shamans but also by ordinary citizens.

Another famous rock is the Chimabawi, or the Skirt Rock. Legend says that the rock got its name from a royal love story between Joseon’s 11th King Jungjong and Queen Dangyeong, his first wife. It is said that after the queen was deposed and got kicked out from the palace, she lived at the foot of Mount Inwang. After learning that the king missed her very much and would gaze at the mountain where she lives from Gyeonghoeru Pavilion inside Gyeongbok Palace, the queen hung a red skirt that she enjoyed wearing in the palace on a rock near the peak so that the king could see. Because of this heart-wrenching royal love story, many hikers go up to the Skirt Rock to take pictures as well. 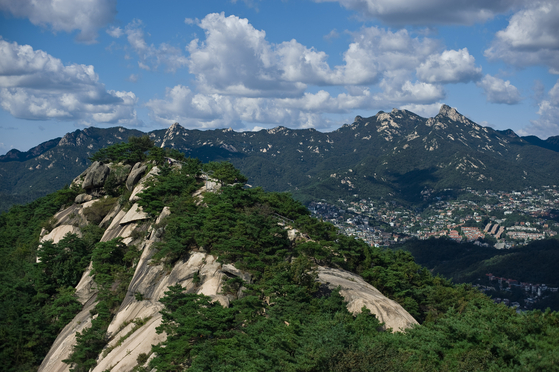 A view of Mount Inwang in central Seoul on a clear day. [JOONGANG PHOTO]


The best route to take to visit Mount Inwang is to go to Gyeongbokgung Station on line No. 3. At exit 3, take the village bus No. 9 for Suseongdong Valley. The journey to discover the hidden wonders of Mount Inwang can begin there.