Police on Tuesday confirmed that an aide to embattled Rep. Yoon Mee-hyang had initially called authorities to the home of the head of a shelter for former comfort women victims who was found dead Saturday after an apparent suicide.


Police initially described the caller as an acquaintance and former colleague of the deceased woman, Sohn Young-mi. It's unclear whether the aide initially disclosed her position in the National Assembly to police, or if she did not admit to being on Yoon's staff until later.

Sohn had been the head of Peaceful Our Home, a shelter for survivors of the Japanese military’s wartime sexual slavery in Mapo District, western Seoul. The shelter since 2012 has been run by the Korean Council for Justice and Remembrance for the Issues of Military Sexual Slavery by Japan, a civic group that is the subject of an investigation by prosecutors following a comfort woman survivor's questioning of its financial transparency last month.


The aide, after failing to get in contact with Sohn, visited her apartment in Paju, Gyeonggi, at 10:35 p.m. on Saturday but did not get any response and contacted 119. Around 20 minutes later, police discovered Sohn dead in apparent suicide in the bathroom of her fourth-floor apartment around 10:55 p.m.

Yoon, a former head of the Korean Council, took her seat as a proportional representative of the ruling Democratic Party on May 30, after she was elected in April.

Rep. Kwak Sang-do, a two-term lawmaker from the main opposition United Future Party (UFP) who is leading the party’s task force probing allegations against the Korean Council, told the JoongAng Ilbo Tuesday that the aide was also a former executive in the Korean Council "who was hired as an aide to Rep. Yoon for the 21st National Assembly."

Kwak said “there are numerous suspicious points,” noting that Yoon had shared a Facebook post late Saturday night on Sohn, then deleted it the next morning.

The Facebook post described how Yoon and Sohn first met in 2004, recollecting how Sohn said she was okay with receiving little pay to work “for a good cause” to help the wartime sexual slavery victims. The post also reminisced about difficult times they had shared together.

Kwak questioned whether Rep. Yoon told her aide to visit Sohn’s house, or if the aide learned of Sohn’s death and informed Yoon right away, and added, “Rep. Yoon has to make clear if she made the Facebook post after hearing news of the death [from her aide].”

Regarding the revelation that an aide to Yoon had been involved, a staffer at the lawmaker's office said Tuesday, “There is nothing to say on this. We don’t plan on giving a position on this in the future.”

Prosecutors are separately investigating allegations of accounting fraud and misuse of donations by the Korean Council. On May 20 and 21, prosecutors raided the group's office, its affiliated museum and the Mapo shelter.

Sohn was said to have been having a hard time psychologically after the raid, according to the Korean Council.

Police have tentatively concluded that Sohn had committed suicide, while they continue to investigate details of the death. The National Forensic Service conducted an autopsy on her body Monday and in its initial findings found no evidence of foul play. Digital forensic investigators are examining her mobile phone to review her last phone call and anything that can be construed as a suicide note.

Sohn’s phone was left in her car before she headed into her apartment, at around 10:57 a.m. Saturday morning, Paju police said Tuesday. There may be little evidence available on the device, given that Sohn couldn’t be reached for half a day before she was found, and the phone was not with her in her final moments.

The Korean Council said Tuesday that a memo with a prosecutor’s name and phone number that the group said was written in Sohn’s handwriting was found at the shelter. The contact was one of the prosecutors from the Seoul Western District Prosecutors’ Office in charge of investigating the allegations of accounting fraud against the Korean Council.

The Seoul Western District Prosecutors’ Office however said in a statement that the investigator visited the Mapo shelter on May 21 to conduct a raid and that a woman on the other side of the gate had said that she could not open the gate until a lawyer arrived to the scene.

The prosecutors’ office added, “The related investigator passed on his mobile phone number to the legal representative, and the memo being reported about appears to be the phone number that woman jotted down.”

Sohn’s wake is being held at the Severance Hospital in Sinchon-dong, western Seoul. It is closed to media. 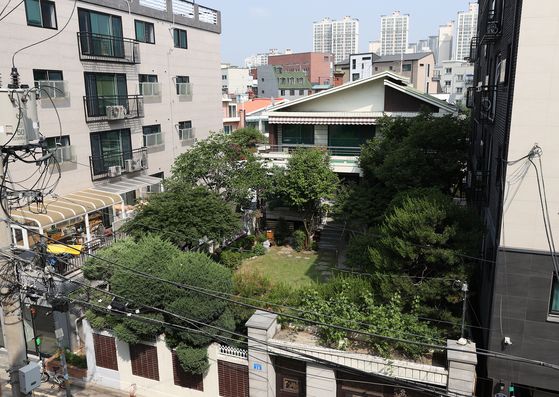 The Peaceful Our Home, a shelter run by the Korean Council for Japanese wartime sexual slavery survivors in Mapo District, western Seoul, is pictured Monday. A wake is in process at a hospital in Sinchon-dong, western Seoul, after the death of the shelter’s former head on Saturday. [YONHAP]