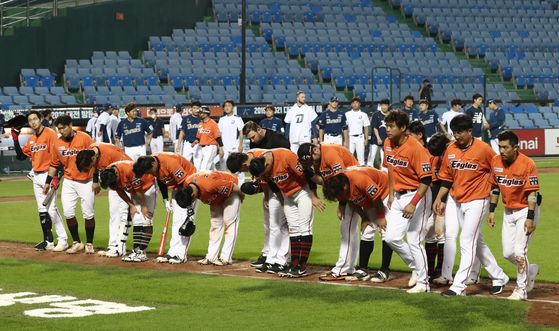 The Hanwha Eagles players bow to the empty stands after losing 2-8 to the NC Dinos at Hanwha Life Eagles Park in Daejeon on Sunday. [NEWS1]

Hanwha Eagles interim manager Choi Won-ho sent 10 players down to the Futures League on Monday evening as the bottom-placed team desperately searches for a way to snap its 14-game losing streak.

The upheaval follows a tumultuous week that saw the Eagles set a new club record for longest losing streak, at 14, play on Saturday with just four coaches after former manager Han Yong-duk sent the other four home and then, after picking up that 14th loss on Sunday, find themselves without a manager after Han resigned.

Futures League manager Choi stepped in as interim manager and is now faced with the task of rebuilding the squad mid-season. Choi’s first step was to reshuffle everyone — coaching staff and players.

"I felt like some of the veteran players were drained physically and mentally for going through so much losing," Choi was quoted as saying on Yonhap. "I decided they could use some break. At the same time, I thought we would need to see some new faces emerge, and I called up some minor leaguers who were putting up good numbers and who I felt had some potential."

Among those sent down are hitters Song Kwang-min, batting 0.217, and Lee Sung-yul, batting 0.226. Three pitchers — An Young-myung, Jang Si-hwan and Lee Tae-yang — with high ERAs were also sent down.

"These young players that have been called up may be lacking in skill, but I think they'll still be able to produce some quick results," Choi was quoted as saying on Yonhap. "No one will win a regular job right away. We'll see how they perform at this level and then make our decisions."

Hanwha face the Lotte Giants in Busan on Tuesday. If the Eagles lose the first two games of the series, they will tie the all-time losing streak record for any active KBO team.

Due to the recent disruption, three players in the offensive lineup are newly called up to the KBO. Park Jeong-hyun on second base and center fielder Choi In-ho will make their first ever KBO appearances, while catcher Park Sung-un has appeared for the Eagles five times in his career, including one game last season.