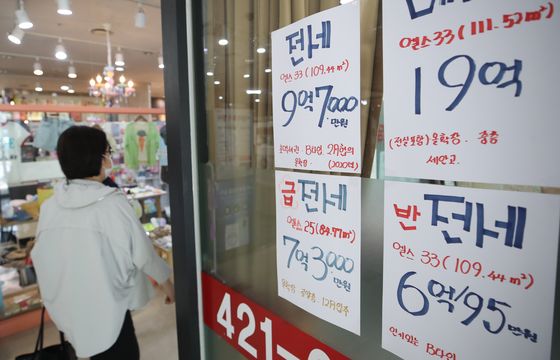 Jeonse offers posted at a real estate agency in Jamsil, southern Seoul, on June 3. According to KB Kookmin Bank's real estate department, the average jeonse price last month was up 5.2 percent on year to 486.5 million won. That's 24 million won more than in May 2019. [YONHAP]

Price fixing and other interventionist measures are being proposed by the Democratic Party (DP) as it fights rising rents, largely driven up by earlier ruling party property-market measures.

These proposals are likely to become law as the ruling party has a 176-seat majority in parliament.

Among the measures being recommended by the DP's Park Ju-min is the perpetual extension of leases, unless the tenant commits serious contract violations, such as failing to pay rent for months on end. If the contract is renewed, the landlord cannot raise rent by more than 5 percent.

Park said the reform bill, which failed during the previous National Assembly, will include a stipulation that the contract can be ended at the conclusion of the lease if the owner plans on taking possession of the unit for their own use.

The goal is to prevent a landlord from denying requests for contract renewal.

DP lawmaker Yoon Hu-duk proposed a reform bill on June 5 that says that the tenant can request extending a lease for another two years after completion of a two-year contract. The rent increase will be limited to 5 percent.

Ahn Ho-young of the same party plans on introducing a reform bill that will require all jeonse long-term leases and monthly rent contracts to be reported to the government by the landlord or the real estate agency.

The ruling party is committed to getting the tenant protection reform bills passed.

During a May 27 workshop, elected representatives of the DP named tenant protection as one of their top priorities.

One common element in rent-related reform bills proposed by ruling party lawmakers is the concept of public interest in the housing transactions. It is being strongly pushed by some of its lawmakers, including former floor leader Lee In-young and Lee Yong-sun, since the recent election.

The basic concept is to prevent people from profiteering in real estate.

In March 2019, President Moon Jae-in submitted a constitutional reform bill that stipulated that the government could pass laws to intervene in the property market if needed. This reform bill failed to pass in the National Assembly two months later, yet ruling party lawmakers have argued in favor of the bill.

The ruling party strongly believes that the reforms could be realized through polices that would strengthen the protection of tenants and increase property taxes. This legislation would support the right to live in housing units over the rights of the owner.

The argument is not only supported within the party but by other liberal parties.

Sim Sang-jeung, head of the Justice Party, in January said when the real estate is based on the public purpose concept, speculation in the market will come to an end.

Some industry experts argue the legislation could have the opposite effect.

“If the reform bills are passed and the rent increases are limited to 5 percent, the landlords will try to hike rents before this bill goes into effect,” said Ham Young-jin, head of the real estate app Zigbang. “In the long-run, it could reduce housing supply as landlords will be reluctant put up the apartments for rent as it won’t be profitable.”

“The landlords will have no reasons to supply housing when even paying the local personal wealth tax and the comprehensive real estate tax,” he added.

Bae Hyun-jin of the same party has introduced a reform bill that would raise the minimum for taxing real estate from the current 900 million won ($757,000) in assessed value for a single apartment owner to 1.2 billion won, while for multiple apartments, it would go from 600 million won to 900 million won.