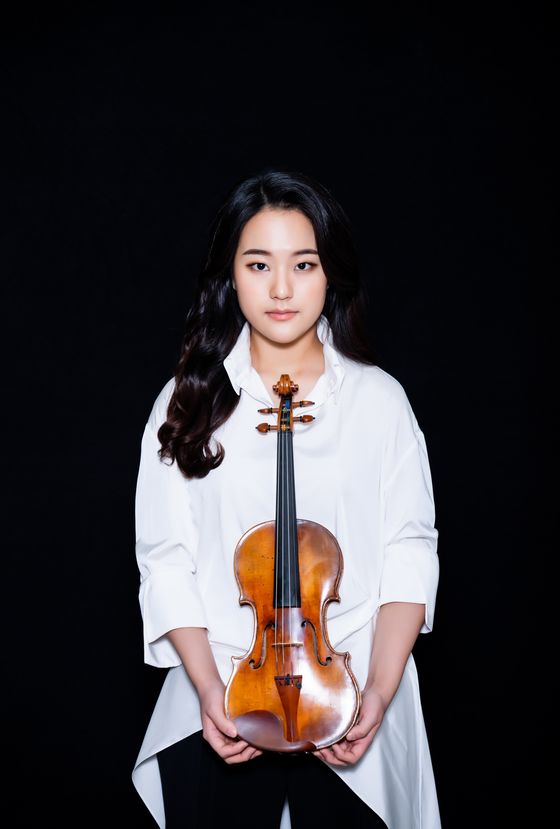 When a violinist chooses to perform an unaccompanied Bach’s “Sonatas Partitas for Solo Violin” or even Eugène Ysaÿe’s “Six Sonatas for Solo Violin,” its a decision that is usually reached after many hours of agonizing as it’s not only extremely strenuous work for the artist but also a program that audience members don’t take lightly.

But that wasn’t the case for violinist Lim Ji-young.

She’ll be performing both Bach and Ysaÿe’s pieces solo over two days next month. The concert wasn’t even on her itinerary earlier this year, an itinerary which is fully booked with concerts and recitals for the next three years. Since winning the first prize at the prestigious Queen Elizabeth Competition in 2015, Lim has been in high-demand.

However, like many other performing artists, Lim, who currently resides in Berlin, Germany, has been stranded in Korea since late February due to the coronavirus and all her concerts have either been postponed or canceled.

To make the most of the unusual blank spaces in her calendar, Lim says she wanted to challenge herself and also believes that these performances are more meaningful and will touch people in different ways in such a difficult chapter in the country’s history.

“The Complete Bach & Ysaÿe Sonatas for Solo Violion” will be held on July 1 at the Anglican Church of Korea’s Seoul Cathedral in Jung District, central Seoul, and a second concert on July 11 at the Consolation Hall of the Seosomun Shrine History Museum, also in Jung District, central Seoul. Since she’ll be performing the complete sonatas over two days, programs for the two concerts are different.

“I could’ve picked more cheerful and popular classical pieces to draw more people in such a time when people don’t even really go out,” said Lim in recent interview with the Korea JoongAng Daily. “Because all the pieces are for solo violin without any accompaniments like a piano or an orchestra, even the audience members have to be determined before they purchase the tickets. Some also say that I may be too young to perform Bach’s ‘Sonatas Partitas for Solo Violin’ as many violinists perform it after years and years of experience.”

“But I wanted to perform the specific pieces at this specific time for a reason,” she said. “For a violin player, performing Bach’s ‘Sonatas Partitas for Solo Violin’ is always on the ‘to do’ list. Many violinists perform it several times during their musical career and I want to do that too. I thought kicking off my very first concert in my 20s with this solo would be the best.”

Bach’s “Sonatas Partitas for Solo Violin” is notorious for being “very thick and elaborate, full of notes that make musicians become dizzy even before they start playing.”

“A player has to really struggle to get it right and it’s physically demanding as well,” said Lim. “I may not like the interpretation I did in my 20s when I look back at it in my 50s but it will be me in my youth with the most physical strength so I will just accept it as it is.”

To make this feat even more impressive, it will be Lim’s first attempt at performing solo for a whole concert that goes on for about two hours.

When there are accompaniments, Lim said there is the option of improvising with your co-musicians from time to time or if something goes wrong, “like one misses a note or something,” she says, “there’s always someone else who can fill in the gap for you.”

But performing solo, Lim said, “you must strictly stick to the plan and everything has to be calculated and carried out in an order,” otherwise, “everything can just collapse.”

Lim said she’s nervous in that aspect, since she was unable to take any lessons from her teacher who is located in Germany.

She tried to take a lesson over a video call, but her usually accommodating teacher told her “you’ll be able to find all the answers in the score.”

Her teacher was right. Lim said all the answers were indeed in the score, “I think it’s the charm of Bach’s pieces.”

She hopes the audience members will also see the same charm and believes music created from such toil will “touch their hearts in different ways.”

This reasoning is also why Lim, who used to be “against the idea of musicians posting rehearsing videos on social media” started doing so since the coronavirus outbreak.

“I used to think that the public would be indifferent to those clips but noticed they are so thirsty for such cultural content in such a time that they were actually enjoying it,” she said.

Everyday, Lim posts a minute-long video of her rehearsing the pieces for the upcoming concerts, revealing the complex scores and how difficult it is even for her to master one difficult bar.

Tickets cost 50,000 won ($41.20). To maintain social distancing between audience members, only about 50 percent of the tickets will go on sale and the seats will not be designated. Tickets can be purchased at ticket.interpark.com/global or by calling 1544-1555.