The coronavirus pandemic essentially had the entire sporting world on hold by mid-March this year. Two months later, on May 5, Korea's KBO became one of the very first competitive leagues to start playing anywhere in the world.

Due to the outbreak, the KBO announced the cancellation of all exhibition games for the first time in history and the start of the season was delayed by more than a month.

Although Korea wasn't the first baseball league to start its season in the midst of the pandemic, coming shortly after Taiwan, the KBO received a huge amount of attention globally with games aired on ESPN and new fans tuning in from around the world. Now nearly two months into the season, the KBO hasn't seen a single coronavirus scare.

To ensure the season started successfully, the general managers of each team, the KBO’s commissioner and Secretary General Ryu Dae-hwan held weekly meetings every Tuesday to discuss the probable starting date as well as the schedule for the 2020 season.

Currently, the league is planning on playing a full season of 144 games, but there’s a possibility of that changing as the monsoon season is just getting started. Also, as cancellations of games leads to double-headers the next day, there are concerns about the players' stamina. Supporters are still not able to attend games, which is disappointing for the fans, tough for the players and potentially devastating for the teams and the league in general.

Still, the fans are not allowed into the stadium and this is becoming a bigger issue to the fans, players, clubs and the league in general.

To discuss the 2020 KBO season start and the plans going forward, the Korea JoongAng Daily sat down with Ryu. Below are edited excerpts. 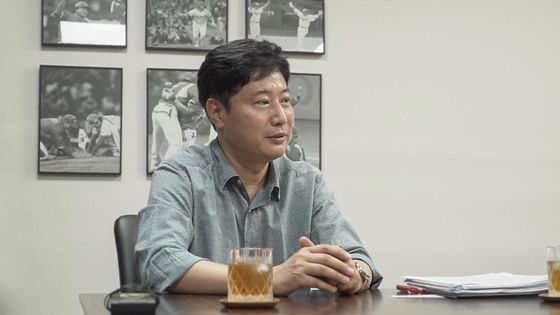 Ryu Dae-hwan, secretary general of the KBO, speaks during an interview with Korea JoongAng Daily on June 19. [JEON TAE-GYU]


As KBO games have been broadcast on ESPN, we’ve heard that the league has been receiving a lot of attention overseas. Have you noticed an increase in interest?

A. To be honest, I didn’t know that it was receiving that much attention. Since the major league hasn’t started [their season] the KBO was being broadcast for the first time. In terms of that, I can feel that [our exposure has] expanded, and by seeing that, I started to think that Korean baseball may not be as exceptional as the major league but it may have its own competitive edge.

The KBO is making headlines for its different baseball culture and fun, but rather than caring about the popularity, I think it’s just meaningful that it’s being broadcast in the United States. It was an opportunity to show that Korea’s disinfection system was perfect and will act as a motivator for the KBO league to enter into the baseball market in the United States.

It’s been a little over a month since the 2020 season started. How would you evaluate the league in terms of how the games are being played, right now?


I think baseball has changed significantly. A lot has changed, but the biggest change of all would be the season being played in empty stadiums. Since the games are being played in empty stadiums, the clubs get to communicate with fans through live broadcasts. I think that not being able to communicate with them on the scene makes us a little uncomfortable. We are at a disadvantage in terms of securing and expanding the fan base.

I think perhaps, we need a little more time to adjust to playing in empty stadiums. But thanks to the devotion and hard work of the league, the season has been going smoothly [so far]. The entire routine has changed. KBO players, coaches and all staff members have to submit a self-examination report in the morning through an application. Despite all this discomfort, they are working hard for their own safety and the normal operation of the league.

What are the players’ perspective about the empty stadiums?

The players get a lot of energy from having fans in the stadium. This allow them to play more aggressively and energetically. But since they don’t have any fans, I’ve heard that the players don’t get too aggressive with their plays.

Also, players regularly mention that they miss the fans in interviews.

But one thing that stands out is the performance of the young players. For young players who are making their debut on the professional stage, they could get nervous and may not be able to play at their best when they play in front of thousands of fans [for the first time]. But by playing in a quiet atmosphere, they don’t get so effected psychologically. So I guess empty stadiums have helped the rookies’ performance.

Are there any advantages to playing in empty stadiums?

I can’t really say this is a good thing, but the trend is changing. Actually, even before the coronavirus, the way we communicate has been changing through YouTube and various new media channels. Sports, too, has to go through that process and due to the pandemic, it’s going through that change faster [than expected]. I think this can be an opportunity for the KBO to adapt. I think this [situation] can become a strong motivation.

But of course there are also disadvantages?


Pro sports is all about cheering and communicating with fans, especially Korean baseball. I think that Korean baseball could be successful on ESPN as a distinct channel thanks to the unique cheering culture and traditional content. So I believe that the most important thing is [to show] the harmony between the players and the fans in the stadium. That is Korean baseball’s strength and since that’s gone, I feel like conditions have worsened.


How does the KBO plan to handle the financial impact of the pandemic?

The clubs in the KBO leagues are seeing losses due to a lack of ticket sales.

In terms of the big market, they are expecting about 10 billion won ($8.3 million) in losses, while smaller clubs are expecting a hit of about 500 to 600 million won. But since this money is needed for the players’ annual salaries, the losses get bigger and bigger. I don’t think there’s an immediate way to make up for it.

In the end, if we have to change our content from a direct product to an indirect service, then we have to find ways to do that. The KBO will also have to come up with new products and need new mid-to long-term plans. I don’t think there’ll be ways to make up for the losses in the short term.

Aside from the KBO clubs, what do you think about the losses for industries that are related to baseball, like the restaurants inside the stadiums and uniform manufacturers?

This is the reason why the timing for the fans to return to stadiums is so important. Not only the clubs, but the industries related to baseball, like the restaurants and convenience stores inside the stadium, restaurants and shops around the stadium, cheering equipment, uniform manufacturers and many more are struggling. There are concerns that impact won’t be recovered within a short time period.

The KBO has been trying to prepare different sustainable content that will help us develop. We are thinking of ways to change the spending platform for baseball content so we can use this risky situation as an opportunity to change.

Since the fans can’t come out to the stadiums, a lot of fans are watching the games live on TV. Have you seen a huge increase in the viewership?

One thing we have learnt through this experience is that the dedication of the fans has not died down [because the can't attend games], as there has been a marked increase to the number of viewers on TV and other media channels.

We’ve been analyzing the viewership for about a month now, but the funny part is that, it’s been this way since the beginning, in terms of television broadcasts, the viewership is either similar or has decreased. But in terms of new media, like Naver or live broadcasts through other mobile or online channels, it has increased about three times [compared to the previous season]. So we can see that the pattern has changed significantly.

On opening day this season, TV viewership was up about 1.06 times compared to last year, while Naver’s accumulated viewership increased by 4.35 times.

In addition to that, the game on June 15, [when the Hanwha Eagles ended their 18-game losing streak], reached its highest TV viewership at 2.06 percent. Even on internet portal site’s live broadcast, it reached about three times more than usual.

What kind of service is the KBO providing fans who can’t come out to the stadiums?

The KBO has found various ways for fans to [meet their clubs] through live cheering. Each club has been actively organizing live fan events and cheering events. The clubs live broadcast fans cheering on their scoreboards between innings and put up banners of the fans and characters cheering in the stands.

Also, in terms of media commentating, to get the fans a little closer, we’ve made changes. Starting this season, interviews with managers during games are permitted so fans can hear their voices.

What else has the KBO been doing?


For the first time in pro sports we held an online media day. Although it was online, by streaming it live, we got to greet the fans directly. We are currently working on a “drive-thru” cheering plan. Using the public parking lot at Jamsil Baseball Stadium [in southern Seoul], we are planning an event where fans cheer together like at a drive-in theater.


Other than that, we’ve got offers from movie theaters to hold events, but due to the coronavirus, that option is limited. In terms of live cheering, mobile phone calls and other marketing, I think we’re ready to explore the different options. By trying different things throughout this season, I believe that we’ll see some content that has the potential to be successful [in the long term].

So do you think these new cheering methods will continue even after the coronavirus?

In some parts, I think there’s a pretty high possibility. I think these new ways to support teams will become more active and through some of the content, I think there’ll be new cheering tools created. Within the process, we are working hard to make live cheering more active. I think we need to provide those tools to the fans.

What kind of changes do you think the coronavirus will bring to Korea?

As you know, the coronavirus has put the world at risk. If we work hard, it can become a great opportunity to create a new culture. This will also apply to sports in general — some parts of the opportunity could even lead to sports [completely] transforming. In this area, the KBO is looking to prepare in a more positive way so we can suit the needs of the young fans and younger generations.

Is there anything the KBO is working on right now in preparation for the post-Covid-19 world?

There’s a saying that a crisis can become an opportunity. Due to the unexpected pandemic, the KBO [and the clubs] has started to create new content. Through this crisis, the KBO is working to create a new baseball industry by coming up with various content. To become a league that has the ability to keep going, we’ve come up with mid- to long-term plans and are progressing step-by-step. We’ll become a league that can offer a more enjoyable baseball experience to fans through different content through different channels.