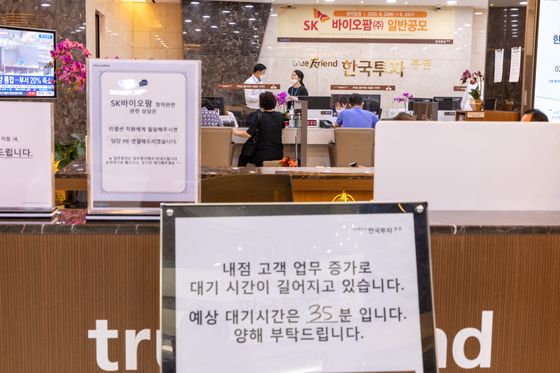 Investors register for a public offering of this year’s ’big catch,“ SK Biopharmaceuticals, on June 23 at Korea Investment & Securities in the financial district of Yeouido in western Seoul. [YONHAP]


Past performance, as they say, is no guarantee of future results, but Korean investors are not moved by that warning. With a flurry of successful initial public offerings (IPOs) and some big names on the horizon, the ants are piling in.

Their enthusiasm for equity has been helped along by government restrictions on real estate purchases, historically low interest rates and a slew of private equity scandals. There are few profitable places for money to go.

The average increase in the stock prices for 12 companies that went public in the first half of the year stood at 52.4 percent as of last Friday, according to statistics from the Korea Exchange and market watcher IR Kudos. This means that a hypothetical investor buying all these stocks at offering would achieve a 100-percent-plus annualized return if they sold at the end of last week.

LET, a manufacturer of equipment used to make organic light-emitting diode (OLED) displays, started trading last Monday on the Kosdaq market at 15,600 won ($13), double the offering price of 7,600 won. At the opening bell, its price hit the trading cap and kept rising when trading started again, to 20,250 won at the market close. As of June 26, the return on LET is 160.3 percent. 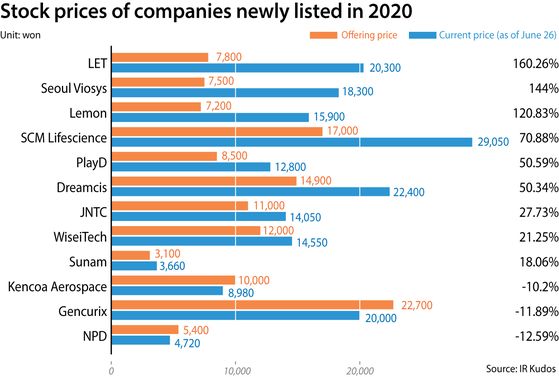 Share prices of other companies increased close to twofold. Returns for Seoul Viosys, a developer of light-emitting diode technology, and Lemon, a nanotechnology company, were 120 percent and 144 percent, respectively. Among the 12 newly listed companies, nine went far higher than the initial offering price.

In March and April, Korea’s IPO market struggled with a slew of sales postponed or canceled. Optimism started to return in May and June, as liquidity increased in the stock market and on the news that SK Biopharmaceuticals set an all-time record for the deposits and subscriptions rates during its own IPO.

Retail investors in Korea deposited 30.9 trillion won for the biopharmaceuticals company’s public offering for a subscription rate of 323.02 to 1 — breaking the record of Cheil Industries in 2014, when individual investors poured in 30.06 trillion won to purchase the fashion company.

The company was so popular deposits parked in cash management accounts of brokerage houses decreased by 10 trillion won from July 23 to 24 when subscriptions were opened to retail investors.

SK Biopharmaceuticals may have functioned as a catalyst. Following the company's IPO, trillions of won flew into subscriptions for other companies.

In the case of Shindo Eng. Lab., a display company, investors deposited around 2 trillion won last week in the company's offering for a subscription rate of 955 to 1. In the same period, 2.8 trillion won was deposited for subscriptions of Withus Pharmaceutical.

Even though the two companies had overlapping public offering schedules, together they raised more than 4.8 trillion won in just two days.

Industry experts predict the craze for public offerings will likely continue on for some time, with large-cap companies scheduled to go public around the second half of the year.

Big Hit Entertainment, the agency of K-pop sensation BTS, applied for a preliminary examination for an IPO on May 28 and is predicted to go public by the fourth quarter. The entertainment agency generated 98.7 billion won in operating profits last year.

Kakao Games, majority owned by Kakao, is said to have applied for a preliminary examination on June 11.

Abundant liquidity in the market may bolster growth for some time. Customer deposits, which are considered investments waiting for the stock market, are up by 70 percent compared to the end of last year, to 46.3 trillion won.

“After the government strengthened regulation on real estate, we are seeing more cash flowing into the stock market than anywhere else,” said Nah Seung-du, an analyst at SK Securities. “Especially because of the recent scandal with funds from private equity firms, more investors prefer to make direct investments than indirect ones. I expect the interest in the IPO market to continue until the end of this year.”

Some warn that buying public offerings does not always guarantee gains and advise investors to be selective in their choices, considering that 10 out of 18 companies newly listed early last year traded lower on June 26 than the offered stock price.

“It is concerning since we are starting to see signs of the market overheating, such as increases in uncleared short-term credit and trade volume,” said Huh Jae-hwan, an analyst at Eugene Investment.