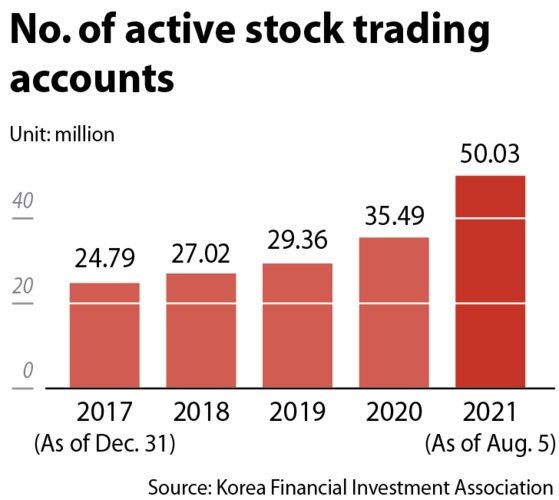 The number of active stock trading accounts at brokerage firms in Korea has passed 50 million, a record high, as stocks perform well and individuals pile into initial public offerings (IPOs).

Accounts with more than 100,000 won ($87) of assets and in which at least one transaction was made in the past six months — the definition of active — totaled 50.03 million as of Aug. 5, according to data released by the Korea Financial Investment Association. That’s up 25 percent, or 10 million, compared to March 19, when the number first broke 40 million.

Investor interest in IPOs is another contributing factor. More retail investors consider subscribing to IPO shares as a way of making a quick buck.

New IPO rules helped. Under the rules, about half of shares available for retail investors are allocated in the same amount for all subscribers who deposit a minimum amount. This encourages them to bid for shares with the knowledge that they will walk away with at least some stock.

Until recently, individuals were allowed to apply with multiple accounts, which resulted in individual investors opening new stock trading accounts at many brokerage houses. This practice is now prohibited.

The number of stock trading accounts from which applications were filed in the SK IE Technology IPO in April was 4.74 million, a record high. About 2.4 million accounts were used during the public subscription for SK Bioscience IPO in March.

A total of 9.11 million retail investors in Korea participated in stock investments as of end of 2020, up three million compared to the previous year, according to the Korea Securities Depository. The public agency estimates the number of retail investors will break 10 million this year, backed by the growing popularity of IPOs.

The statistics indicate that the average retail investor has stock trading accounts at four to five different brokerage houses.

“The fact that the number of stock trading accounts has surpassed 50 million itself means that stocks have become very common investment method among Koreans,” said Hwang Sei-woon, a research fellow at the Korea Capital Market Institute.