Health officials are looking for ways to tighten regulations on smaller gatherings as the country tries to curb new coronavirus infections.

Beyond church clusters, which have been a big part of Korea's pandemic, transmissions are occurring in smaller gatherings, which are not regulated. Infections are happening at meals between church members or retreats, rather than the services, as well as social clubs.

Yoon Tae-ho, a senior health official, said in a coronavirus briefing Monday, “There is an increase in infections through smaller gatherings and events that are difficult to manage by quarantine authorities."

Authorities say that between June 22 and 28, seven new cases were traced to small gatherings of five to 10 people.

Coronavirus cases dropped slightly from the previous day with 42 new cases, of which 30 were local infections and 12 were imported, as of Sunday midnight, according to the Korea Centers for Disease Control and Prevention (KCDC) Monday. Of the new cases, 21 patients were in Seoul and the metropolitan area, two were in Daejeon and three in Gwangju.

The total caseload in Korea is now 12,757. The global Covid-19 tally surpassed 10 million as of Sunday, with over half a million reported deaths worldwide.

New cases related to clusters in churches in Gwanak District in southern Seoul and Anyang and Suwon in Gyeonggi are also on the rise.

A 31-year-old woman who was confirmed as the first person with Covid-19 in Wangsung Church in Gwanak District is an example of how the virus spread in social gatherings. Aside from regular services, she also attended a church retreat and a choir practice. The church has 1,700 members and added one new case, bringing its total cases to 28 as of Monday.

Another church, the Lord Glory Church in Anyang which had 22 cases confirmed as of Monday, also has seen the virus spread in smaller gatherings of church members rather than Sunday services.

There are also at least a dozen cases linked to a Buddhist temple in Gwangju.

Jung Eun-kyeong, head of the KCDC, said in a briefing Monday that, following contact tracing of religious facilities recently, it was discovered that people were not wearing masks or abiding by standard quarantine procedures. She advised remote or online religious activities, but if that was not possible, wearing masks “and trying to avoid group meals, singing and activities that can produce large droplets.”

The government on Sunday introduced a three-level system to codify guidelines for social distancing measures depending on the severity of the Covid-19 infections in the country. 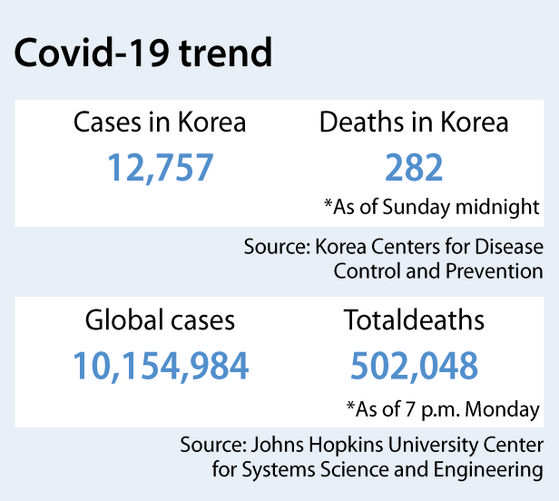 The country is currently on Level 1, under which the number of daily virus infections, mostly below 50, is manageable under the health care system. On Level 1, people can go about daily social and economic activities complying with the so-called everyday life quarantine scheme introduced on May 6, which includes mask-wearing and electronic visitor logs at high-risk facilities such as bars, noraebang (singing rooms) and hagwon, or cram schools.

The government also decided to open up sports events to a limited number of spectators starting this week, so long as proper social distancing measures are followed at the games.

Level 2 will be applied when daily infections exceed 50 but remain below 100 for 14 consecutive days, seen as an indicator of consistent community transmission. Indoor gatherings of over 50 people and outdoor gatherings of over 100 people will be banned. Schools will have to limit class sizes or opt for online lessons, while sports will convert back to being spectator-free. High-risk facilities will be suspended while other facilities frequented by many people, including movie theaters, churches and wedding halls, will have to adhere by stricter measures.

Level 3 will be applied when there is a mass outbreak exceeding 100 cases a day, or when there is a doubling of cases from the previous day twice in one week. Social gatherings over 10 people will be banned and large religious establishments will have to suspend services. All schools will suspend physical classes and public institutions will urge employees to work remotely aside from essential workers.

The scheme applies nationwide but can vary between regions depending on whether there is a large discrepancy in their coronavirus situations. The implementation periods of the higher levels are expected to last between two to four weeks and can be readjusted depending on the infections.