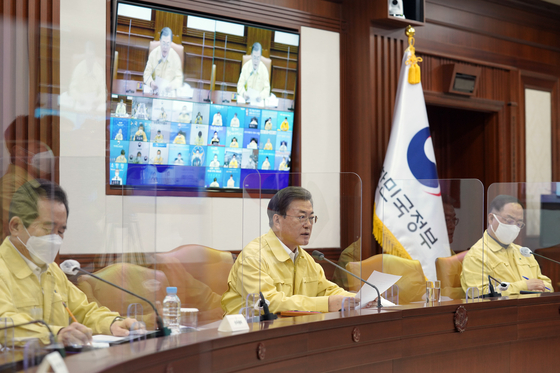 President Moon Jae-in speaks at an emergency meeting of the Central Disaster and Safety Countermeasure Headquarters in Seoul Sunday to discuss the coronavirus response as Korea surpassed the 1,000-case mark the previous day. The meeting was attended by chiefs of government agencies, while heads of municipal and provincial governments participated virtually. [YONHAP]


President Moon Jae-in on Sunday ordered health authorities to be prepared to take social distancing to the highest level if the pandemic is not contained, as Korea broke 1,000 daily Covid-19 cases Saturday for the first time.

“If we are not able to curb the transmissions now, we will reach a crucial juncture where we will have to review raising the social distancing level to Level 3,” said Moon during an emergency meeting at the Central Disaster and Safety Countermeasure Headquarters in Seoul Sunday afternoon.

Moon convened the coronavirus meeting attended by Prime Minister Chung Sye-kyun and chiefs of related ministries and agencies for the first time since Feb. 23, some 10 months ago, to address how to respond to the rapid rise in Covid-19 case numbers. Heads of municipal and provincial governments attended virtually.

The country reported a record-breaking 1,030 coronavirus cases Saturday midnight, of which 1,002 were domestic infections, raising total case numbers to 42,766, according to the Korea Disease Control and Prevention Agency (KDCA) on Sunday. There were two additional fatalities, raising the total death toll to 580.

This broke the previous record of 950 cases Friday and comes despite the government raising social distancing measures in the greater Seoul area last Tuesday to Level 2.5, the second highest in the five-tier system.

Moon, while noting that Level 3 is the “last resort,” ordered health authorities to “thoroughly prepare” for such a scenario, and if they determine that the situation is inevitable, to “resolutely make a decision.”

He also recognized the “pain and damages” that would be suffered by the public if social distancing measures are elevated any higher, addressing the economic strains felt by the people and businesses amid the ongoing pandemic.

Just one month ago, Korea’s daily case numbers were in the 100s, but the daily count spiked to 400 to 600 infections earlier this month.

At the height of the first wave, cases peaked at 909 on Feb. 29, concentrated in Daegu.

Level 3 measures can be applied if there are 800 to 1,000 daily patients for a week, or if there is a doubling of cases, and can lead to major restrictions for businesses, stopping short of a nationwide shutdown like those ordered in some European countries at the peak of the pandemic.

The average number of infections in the past week was 720 cases.

Under Level 3, only essential businesses would be allowed to open, while schools would have to be shut and spectator sports events canceled. Gatherings of 10 people or more will be prohibited, while public and multi-purpose facilities will be shut.

Under the current Level 2.5 restrictions, many businesses including restaurants have to close at 9 p.m.

Moon said that the government, provincial governments and the private sector will work toward building treatment center capacity and adding hospital beds and medical staff. He noted that K-Quarantine measures have responded best under crisis situations and said that the country could “overcome this crisis” by expanding testing and contact tracing and strengthening quarantining and treatment of patients, but he noted that speed is of the essence.

Moon added that this was the “last hurdle” before the procurement of treatments and vaccines and urged the people to refrain from gatherings and to abide by social distancing protocols. 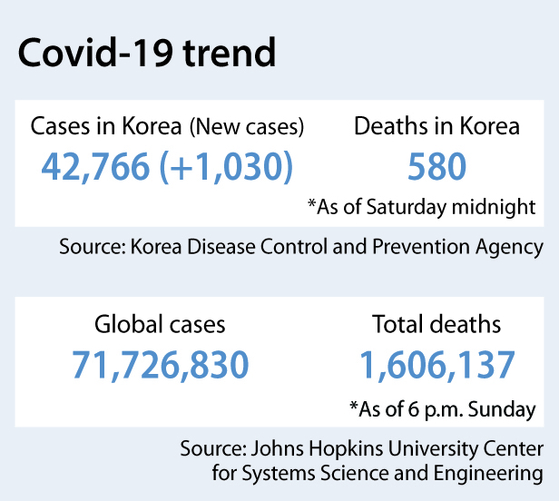 Covid-19 cases continue to remain highly concentrated in the greater Seoul area, with includes Gyeonggi and Incheon. There were 396 cases in Seoul, a record-breaking number for the capital, 328 in Gyeonggi and 62 in Incheon, according to the KDCA. However, coronavirus infections also continue to spread nationwide, including 56 cases reported in Busan, 28 in Daegu, 22 in South Gyeongsang, 18 in North Gyeongsang and 17 in Gangwon.

There were 179 critical patients as of Saturday midnight, the same number as the previous day, according to the KDCA.

Health Minister Park Neung-hoo in a press conference later Sunday afternoon said that health authorities “have begun to review elevating the social distancing level to Level 3,” adding that this measure would “be inevitable to prevent the collapse of the health system should transmissions continue.”

Taking into consideration the current trajectory of cases, the government plans to procure 10,000 hospital beds by the end of the year, including 300 for critical patients, 2,700 at infectious disease centers and 7,000 at living treatment facilities, he added.

But the current Level 2.5 measures for greater Seoul and Level 2 nationwide are expected to ensue for the time being.

The Seoul Education Office said Sunday that kindergartens, elementary and specialty schools will completely revert to online classes starting from Tuesday. The lower-grade students have been able to attend physical classes with restricted sizes until now, while middle and high school classes have already switched to online lessons since late last month, ahead of the nationwide college entrance exams administered on Dec. 3.

The shutting of physical classes for all grades is in line with the stricter Level 3 measures.

The Central Disease Control Headquarters said that it will administer free Covid-19 tests at 150 new testing sites, including at Seoul Station, Yongsan Station, major university districts and other high-risk areas in the greater Seoul area starting from Monday through Jan. 3.

People can be tested at these centers anonymously, with just a mobile phone number, regardless of symptoms from 9 a.m. to 6 p.m. daily. The drive aims to try to track down the silent transmissions.

Gyeonggi Gov. Lee Jae-myung said Sunday that he will seek an emergency measure to designate a private university dormitory to treat Covid-19 patients as the province is running out of hospital beds.

The Gyeonggi Provincial Government earlier that day requested the cooperation of Kyonggi University in Suwon amid the shortage in hospital beds and residential treatment centers, comparing the crisis to a “wartime situation.”

The National Fire Agency said Sunday it decided to dispatch 45 additional ambulances and 180 emergency workers from cities and provinces outside of the capital area, including Busan, Daegu, Gwangju and Daejeon, to accommodate the spike in patients in greater Seoul.

Lee Nak-yon, head of the ruling Democratic Party (DP), said in a press conference at the National Assembly Sunday that the party is pledging all efforts to enable Covid-19 vaccination before March next year.

He stressed that the DP and the government will work to expand hospital bed availability, including residential treatment centers and intensive care units (I.C.U).

The I.C.U. capacity in greater Seoul is under strain as cases are rapidly increasing in the metropolitan area. Health authorities said that as of Sunday, some 580 Covid-19 patients are awaiting hospital beds in greater Seoul, up from 65 the previous day.

A new cluster of infections at a church in Dangjin, South Chungcheong, has led to 40 Covid-19 patients, including 31 members of the church and two staffers working at a Covid-19 testing center at the Dangjin Hospital, according to the city officials. The cluster is also linked to six infections at two separate elderly cares centers so far. City officials said that the church-goers are known to have shared a meal together.

Another church in Daegu also reported 13 cases so far, including 10 churchgoers and their acquaintances. Health authorities have urged religious facilities to conduct online sermons and to limit meals and small gatherings, but such measures are not always being followed. These churchgoers in Daegu did not wear masks and also shared meals, said health officials, breaking social distancing guidelines.

An additional 51 cases were reported in a church in Gangseo District, western Seoul, as of Sunday, bringing total related cases to 140 after the first case was reported on Dec. 6, according to the Seoul Metropolitan Government. City officials said that it has conducted tests on 600 church-goers, but health authorities have not been able to track the route of infection, though they suspect the church choir contributed to its spread.

A total of 21 cases are linked to a call center in Jung District, central Seoul, as of Sunday, according to the KDCA, after the first patient was reported on Dec. 3.

A call center for Kepco in Jung District reported 16 cases after the first case was reported last Wednesday.

A hospital in Dongdaemun District, central Seoul, reported 16 additional cases as of Sunday, bringing total infections in the cluster to 58.

A restaurant in Jongno District, which is linked to infections at an elderly care center in Suwon, Gyeonggi, has reported a total of 275 cases so far.

Busan reported 88 cases at an elderly care facility, the Inchang Recuperation Hospital. The spread in the elderly care center is seen to be linked to an earlier cluster from a music class late November.