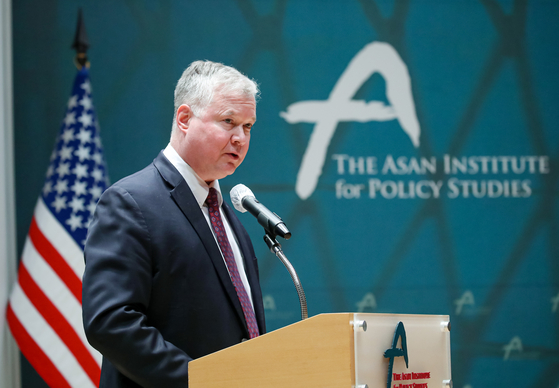 
U.S. Deputy Secretary of State Stephen Biegun said Thursday at a think tank in Seoul that he will convey to the next team of American nuclear negotiators that the “time for peace has arrived,” stressing that “sustained engagement” is the only way forward to resolve the challenges with North Korea.

“As we look to the future, I remain convinced that diplomacy remains the best course, indeed the only course, to solving our challenges with North Korea,” said Biegun in his speech at the Asan Institute for Policy Studies. “We hope that North Korea and the United States can finally engage in the kind of serious diplomacy that requires sustained engagement and difficult tradeoffs, but has huge rewards. It is time for both our countries to move forward.”

Biegun said that he will convey to his successors in the incoming Joe Biden administration that “The war is over, the time for conflict has ended and the time for peace has arrived. If we are to succeed, we must work together — the United States, the Republic of Korea, and the DPRK. And when we do, we will at long last be able to bring to this peninsula the lasting peace and prosperity that all the Korean people so richly deserve.”

DPRK is the acronym for the Democratic People's Republic of Korea, the North’s official name.

“We don’t have to do it overnight,” he later elaborated. “The North Koreans don’t have to make the concessions upfront. We should do this in parallel, we should do it simultaneously, and I believe in doing so, we can address the concerns of both sides.”

Biegun, who doubles as special representative for North Korea, overseeing working-level nuclear negotiations with Pyongyang since August 2018, began a five-day visit to Seoul on Tuesday, seen as his final trip under the current administration.

When asked why the United States did not accept North Korea’s offer to give up its key Yongbyon nuclear complex in exchange for partial sanctions relief during the second North-U.S. summit in Hanoi in February 2019, Biegun said “that is not all of North Korea’s nuclear weapons program,” and that the two sides did not have enough time to “fully explore the limits of what may be possible, in part because the [North Korean] negotiating team was not empowered to discuss those issues.”

He added, “Honestly I think if there had been an agreement in Hanoi [...] that might have been a more challenging blow to the future of diplomacy with North Korea than the failure to have any agreement at all.”

Biegun said in his speech that security guarantees and sanctions relief for North Korea could be advanced if it is ready to make progress on denuclearization.

“We do not expect North Korea to do everything before we do anything, nor should North Korea expect such an outcome from us,” said Biegun. “But we must agree to lay out a roadmap for action, and we must agree on where that roadmap ultimately leads.”

He also stressed the potential of the Singapore joint statement signed between North Korean leader Kim Jong-un and U.S. President Donald Trump in their first summit on June 12, 2018, as it “lays out a much larger vision of a fundamental reinvention of our relationship, one that requires big trades, big steps and big decisions from both sides.”

He said Washington has “sought to make progress in parallel on all the elements of the Singapore joint statement: complete denuclearization; a lasting and stable peace; humanitarian efforts to heal the wounds of war; and the eventual, full normalization of relations between our two countries.”

However, his team also expressed intentions to “address all the core concerns of both North Korea and the United States,” including elements not explicitly stated in the Singapore summit joint statement. This included dealing with North Korea's concerns about the guarantee of its long-term security, should it give up on its ballistic missiles, and nuclear, chemical and biological weapons.

Biegun listed some ways to ensure such a security guarantee, such as pursuing diplomatic negotiations on a treaty to bring a permanent end to the 1950-53 Korean War, military confidence-building measures, observers at military exercises and the establishment of diplomatic liaison offices in Washington and Pyongyang, to head toward the ultimate goal of normalization of relations.

He also welcomed “mutually beneficial inter-Korean cooperation as an important tool to cultivate trust and build cooperation on the Korean Peninsula,” including people-to-people exchanges in the fields of education, music, culture and sports.

However, Biegun admitted that he was “disappointed” with not being able to accomplish more over the past two years.

“Regrettably, much opportunity has been squandered by our North Korean counterparts over the past two years, who too often have devoted themselves to the search for obstacles to negotiations instead of seizing opportunities for engagement,” he said. “Yet, remarkably, the potential of the Singapore summit is still fully present, despite our failure to advance what was agreed.”

But Biegun added, “This is not the end of our efforts, and it should not be.”

While noting that his time as the U.S. point man for North Korea will soon end, “at least for now,” Biegun said that he will convey to the new team his experience and recommendations, and that “it will be for them, and our counterparts in North Korea, to best advise the way forward on U.S.-North Korea relations.”

Biegun also said South Koreans “should be proud of all they have achieved over the past 70 years and should be confident that as we evolve and rejuvenate our alliance, this generation of Americans will continue to seek to protect and project the values we share and have sacrificed so much to achieve.”

He added, “The U.S.-ROK alliance could advance a Pax Indo-Pacifica, a region at peace, protected and made prosperous in equal measure by those who comprise the Indo-Pacific.”

A U.S. State Department spokesman said in a statement that Biegun during his talks reaffirmed “the U.S. support for inter-Korean cooperation, and continued U.S. readiness to engage in meaningful dialogue with the DPRK in the pursuit of complete denuclearization.”

Biegun was set to wrap up his trip with a dinner banquet hosted by Korean Foreign Minister Kang Kyung-wha before departing back for Washington Saturday.