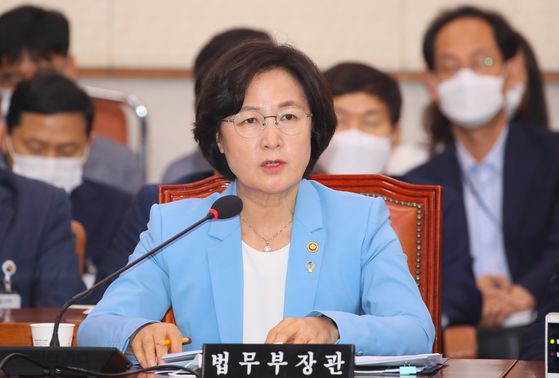 
The prosecution has questioned key witnesses in an investigation into a suspicion that Justice Minister Choo Mi-ae’s son was let off the hook when he went AWOL from the military in 2017.

The Seoul Eastern District Prosecutors’ Office is in charge of the probe and has questioned military officials and men who served in Choo's son's unit at the time, according to sources informed about the case.

In 2017, Choo was chairwoman of the ruling Democratic Party (DP), while her son was doing his military duty in the Korean Augmentation To the United States Army, or Katusa, for the 2nd Infantry Division of the U.S. 8th Army.

During her confirmation hearing last December, Choo faced questions from opposition lawmakers about her son’s military service. Rep. Kim Do-eup said he had received a tip that after Choo’s son was reported AWOL, Choo telephoned the military, and a senior officer had extended his leave.

At the hearing, Choo said her son had a knee problem, so he consulted with the military and received more days of leave to be admitted to a hospital.

The opposition party later filed a criminal petition, and the Seoul Eastern District Prosecutors’ Office is investigating the case.

In February, a former fellow soldier told the JoongAng Ilbo that Choo’s son had received special treatment. He said Choo’s son failed to return to his unit in time after a medical leave, and a senior officer suddenly granted an extension.

The prosecution questioned the man as a witness on June 19.

Sources informed about the probe said the witness told the prosecution that Choo’s son took a 10-day medical leave in June 2017, and then received an extension for another 10 days. When his extension was nearing its end, Choo’s son applied for another, but the master sergeant in charge of the unit did not approve it. The rejection was made in front of senior officers in the unit, the witness told the prosecutors.

The witness told the prosecution that he was on duty the night of Choo’s son’s scheduled return and received a report from a soldier in charge of roll call that he had not returned to the base. He phoned Choo’s son around 9 p.m. on June 25, 2017, and ordered his immediate return to the base.

Shortly after their phone conversation, a captain visited the unit and told the witness to change Choo’s son’s status on the roll call report as a soldier on leave, not AWOL. The witness said he did not know the captain’s name.

At the time, the witness sent Facebook messages to fellow soldiers to complain that Choo’s son delayed his return to the base, accusing him of lying about his health conditions. The witness submitted the messages to the prosecution as evidence.

The master sergeant who initially struck down Choo’s son’s request for a second extension was also questioned by the prosecution but offered a different account, according to sources.

“At the time, I was diagnosed with cancer, so I could not focus on operating the unit,” he reportedly told the prosecution. “I don’t remember what happened.”

But the first witness recently submitted evidence attempting to disprove the master sergeant’s claim, sources informed about the probe said. Social network messages he had exchanged with fellow soldiers in June 2017 included the master sergeant’s various orders and directions, indicating that the officer was actively working at the time.

Prosecutors plan to question more witnesses and obtain records from the Ministry of National Defense.

Prosecutors also made progress in identifying the captain who allegedly gave the order to classify Choo’s son as on leave, sources informed about the probe said.