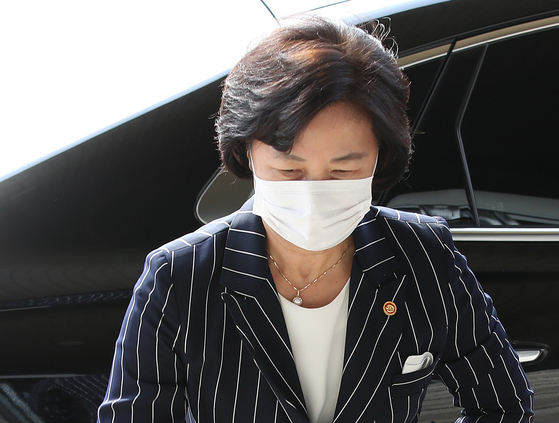 
A former commander of the Army’s unit responsible for managing the Korean Augmentation to the United States Army (Katusa) program on Friday became the first witness to publicly back allegations that military officials were pressured to give preferential treatment to Justice Minister Choo Mi-ae’s son.

Retired Col. Lee Chul-won released a statement detailing his position on the controversy surrounding Choo’s son, surnamed Seo. Seo served in the Katusa for the 2nd Infantry Division of the U.S. 8th Army from November 2016 through August 2018, and Lee was the commander of the Korea Army Support Group, which oversees the Katusa program, during the period. At the time, Choo was the chairwoman of the ruling Democratic Party (DP).

Colonel Lee did not specify who was behind the alleged pressure campaign.

Both Choo and Seo have denied all accusations that she abused her power to arrange favors for her son.

“When Seo was in boot camp, one of the staff officers reported to me that a request was made from outside to assign Seo to the Yongsan garrison,” Colonel Lee stated. “The staff officer rejected the request and explained about the process on how Katusa soldiers were assigned to bases. […] After receiving this report, I stressed to my staff officers that they must never accept any improper requests and warned them about various consequences.”

Colonel Lee also said he gave a lecture to family members of 400 Katusa soldiers at the graduation ceremony of the boot camp to ensure that they never make special requests to the military. He said he intentionally did so after he was informed that Seo’s family was at the event. “Although some media said I gave the lecture only to Seo’s family, I had no separate contact with them,” he said.

According to Colonel Lee, the military still faced pressure to select Seo as one of interpreters for the 2018 PyeongChang Winter Olympics.

“After the Defense Ministry sent a notice that it was selecting military interpreters, staff officers reported to me that they had received multiple phone calls requesting Seo’s selection,” he said. “I also received reports that such phone calls were made to the local unit of the 2nd Infantry Division.

“I told my staff officers that it would become a big problem and told the units to select interpreters by drawing lots,” he said. “Later, I visited [Seo’s] unit, gathered volunteers including Seo and drew lots.”

Colonel Lee also denied media speculation that he has a special relationship with People Power Party (PPP) Rep. Shin Won-sik, who made a series of allegations that Choo had abused her power on behalf of her son.

Shin, a retired general, has been publicizing statements he says were obtained from several former military officers, including Colonel Lee, to back the allegations.

“Shin was the commander of the 3rd Division and I was his chief of staff for three months from late January till late April 2011,” he said. “He was one of hundreds of officers who I had worked with during my 34-year military career. We had no contact since then, and we [recently] had our first phone call in nine years due to the latest scandal.”

Colonel Lee said he remained tight-lipped until now because he didn’t want his staff officers who are still in the military to face any trouble. He said he decided to come forward to correct misunderstandings about what had happened.

He apologized to the public for the scandal surrounding the unit he once commanded. “I hope this case will no longer be politicized and will serve as an opportunity to change the culture of seeking special treatment for soldiers. I also believe all the members of the military must be protected. I hope for a just and fair resolution to this case.”

Meanwhile, Prime Minister Chung Sye-kyun offered an apology to the public on Thursday about the scandal.

"I feel embarrassed before the people for the issue,” Chung said during an interview with JTBC’s evening news program. Chung, however, did not indicate whether Choo would be sacked.

Chung is the first senior official of the Moon Jae-in administration to speak with regret about the issue. Many ruling party lawmakers have been defending Choo.

Since opposition lawmakers filed a criminal petition to the prosecution in January, the Seoul Eastern District Prosecutors’ Office has been investigating the sandal. As the probe moved slowly for the past eight months, civic groups, whistle-blowers and lawmakers have begun talking to media outlets about the allegations surrounding Choo and her son.